A Special Human, A Humble Warrior, A Generational Talent: These Are Some Of The Phrases Used To Describe Islam Makhachev. Daniel Cormier Gives Insight Into The Surging Lightweight
By McKenzie Pavacich, on Twitter @mpavacich_ • Feb. 23, 2022

As Islam Makhachev continues to take the UFC lightweight division by storm, we sit down with former two-division champion and UFC color commentator Daniel Cormier to discuss what it is about Makhachev that separates him from the rest of the division.

As Makhachev heads into the second main event of his career this weekend against Bobby Green, who replaces an injured Beniel Dariush, at UFC Fight Night: Makhachev vs Green, he faces massive implications in making his case as the next lightweight title contender. But before that, Cormier gives us insight into what makes Makhachev so special.

Q: What is it that you recognized in Islam Makhachev that helped you realize him as a generational sort of talent?

A: You know, when Makhachev came to AKA (American Kickboxing Academy), he was the first one to come after Khabib (Nurmagomedov) started coming. So you knew he was special, but you knew the story: he was the one that was closest related to Khabib in terms of the fact that they'd been together the longest. He was (Khabib’s) dad’s student from the start.

I feel like he was the one that they wanted people to know, right after Khabib made his impact. He walked into the gym, couldn’t speak a lick of English, but you could see in his work that the kid had a ton of talent. He was a sponge willing to learn, and that ultimately, he would find his way to a ton of success inside the UFC.

Q: What does it mean to you that someone with his level of talent and impact chose to train with you and AKA?

A: You know, when I was still fighting and in there every day, to have those guys when they would come in for training camp, to have that level of talent in the room and see that those guys were trying to learn, but they were also willing to teach.

They're not just taking, every time they came to the gym, Islam's looking to give back the wisdom that he has in sambo and in grappling. He’s just a special type of person, not only as an athlete, but as a man, because he wants to not only succeed, he wants to see people reach his level also.

It's one of the very endearing characteristics that these Russian guys have. It's not a one person type of deal. It's like, Let's all go together. And not everybody's like that. But I think that not only comes from them and their upbringing, but also it's the way that the American Kickboxing Academy works. And because of that, they kind of bought into it and coupled it with what they already have. It was just a match made in heaven.

Q: When you have such talented athletes that seem to elevate everyone in the room around them, what does that do for the dynamic of a gym?

A: People always talk about how these gyms grow, and how they become so special. Well, winning is contagious, right? And I think the greatest story of that is 2015: Cain was the champ, I won the belt, Rockhold had the belt and then Khabib won the belt. It's all contagious. And that's was just the four of us as we were competing at the top of the sport, but you had guys like Islam winning the entire time, and a number of other people.

So, it was you (at the top) win. Everybody else believes winning is the way it should be. It's expected, right? You earn the expectation of a gym that wins. Islam took that, and now it's time to be the leader of that gym, because we're all retired now. But it's contagious, man. You see guys doing these special things over and over again, you want to go out there and match that, because you know that you're putting in as much work as anybody else, that isn’t headlining these cards, that aren’t winning these championships. I'm working right even with these guys, so I can do exactly what they do or have done. And I believe Islam is now ready to go and carry the torch of the gym.

Q: When you’ve been in combat sports for as long as you have, and you look at Islam and his talent, what do you think his potential is for the impact that he can have on the sport and the people around him?

A: For Islam Makhachev, I think the sky's the limit. Because he is honestly even ahead of Khabib, even in the striking. For as good of a grappler as he is, he's ahead in the striking, his English is very clean, he can reach levels that some thought were unattainable, especially for a guy that English is his second language.

You want to inspire on your journey. It's what we all want to do. We want to let the next generation see what we did and look at it and go, I want to be that. Islam is going to do that for a lot of kids — not only in Russia, but everywhere around the world. 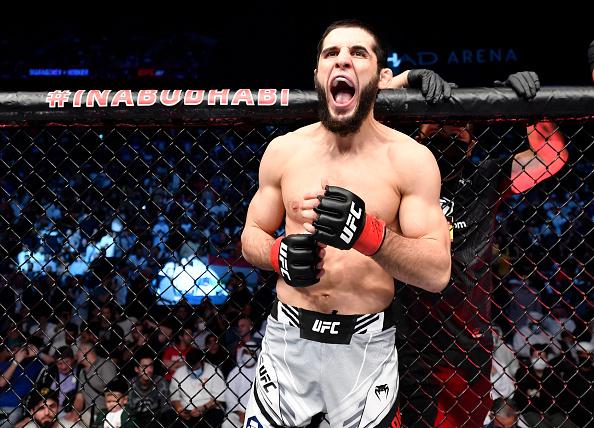 Q: When you think of inspiration and it coming from someone who's extremely humble and works in silence, you don't necessarily see the amount of work that is put in. Do you think his impact on the sport is something that will be seen quickly, or more realized when his career is over?

A: I think with Islam, it's the idea that he works very quietly, right? He's not vocal. He's not jibber-jabbering online, but when you see him, it's in the work. And I believe that's what makes him special. He comes from Dagestan, comes from the mountain into San Jose, trains, gets prepared, goes out and smashes somebody, and then he goes back to that solitude.

So, there are so many questions that surround who he really is. And I believe that's intriguing to a lot of people. It's almost like these guys are fighting, they’re in here and they’re around, like Khabib, and then all of a sudden, you realize, Wow, this is next level. And I believe that's the same type of journey Islam will take because this dude is 21-1 right now. He lost one fight, and that was in the UFC. So, he has already been here, but I think now people's eyes are just starting to open to who and what a special talent Islam Makhachev really is.

Q: Is there a moment that sticks out in your mind that you will never forget about Makhachev?

A: Yeah, you know, one thing I think about Islam is (chuckles) his confidence. The guy's confidence is through the roof. And he is humble. He truly is. I don't think you can come from that area, and grow up in the way that these guys did and not carry that gene. He's a humble guy — but his belief in himself is next-level.

He was talking to me about wrestling one day, and I was asking him about somebody, I don't remember who it was, and the guy's tremendous wrestler. And (Islam) goes, “Brother, brother, please. Bring Jordan Burroughs, this will be a close match.” And I’m like, “Jordan Burroughs is the second greatest American wrestler of all time, Islam, you can't possibly believe that you can wrestle Jordan Burroughs.”

And he does believe that if he was to wrestle Jordan Burroughs, it would be a close match. So his confidence. That story… I was like “Islam, like no way you believe this.” But he does, and it's very consistent with how he's been.

I love the kid. I think he's fantastic. They're just great guys, but I think now he's a leader, right? And it's on us as teammates and friends to support him.