Daniel Cormier And The American Dream

Inside And Outside The Octagon, The Former Double Champ Does It His Way
By Thomas Gerbasi, on Twitter: @TGerbasi • Aug. 13, 2020

It seems so simple in theory. Daniel Cormier has put together a resume any athlete would envy. Two-time U.S. Olympic team member, two-division UFC world champion, participant in some of the biggest fights of this era.

So at 41, there’s no better way to walk off into the sunset than with one more pay-per-view headliner against a man he’s already thrown hands with twice. As a bonus, the winner gets to walk away with the unofficial title of greatest heavyweight of all-time.

Then it ends. Only in Cormier’s case, he’s not walking into the unknown like so many fighters do. He’s got a commentary gig with the UFC, he just wrapped up his first job on the EA Sports UFC 4 game, and there are endless possibilities for him moving forward, not to mention his wife Salina and children Daniel Jr. and Marquita will be welcoming Luna to the family in October.

It’s simple. Fight one more time, take a bow, leave the gloves in the middle of the Octagon and begin the next chapter. 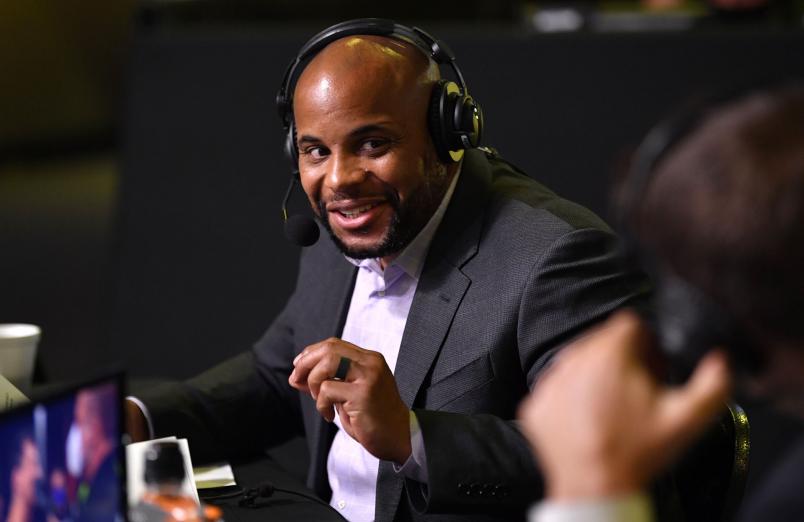 DC On The Desk With Brendan Fitzgerald, 2020 (Photo by Jeff Bottari/Zuffa LLC)

Simple. Unless you’re Daniel Cormier, someone who has been competing most of his life, and at a high level, no less. Now he’s being asked to move on from the only thing he’s known and live life as a civilian. Not “DC.”

“That's the question that I get all the time and I'm more confident in that now than I've been in a long time,” said Cormier. “I told you guys a long time ago that I had an idea that I wanted to be done a year ago, but unfortunately, some injuries and things happened to where it kept me around longer. I just did not feel in the last fight that I was able to be who I am. And I just want to be who I am one last time. I believe me at my best is enough to beat Stipe Miocic, but the fact that I've been able to train effectively, the fact that I'm not injured, is enough to give me confidence in the fight in winning, but also comfort that if it doesn't go my way with being okay walking away.”

Order The Pay Per View Here

That last fight against Miocic was almost a year ago to the day, August 17, 2019. Cormier made history the summer previous when he knocked Miocic out in a single round to add the heavyweight title to the light heavyweight crown he already owned. The Louisiana native went on to successfully defend his heavyweight title in the main event of UFC 230 at the iconic Madison Square Garden. If he defeated Miocic in their UFC 241 bout in Anaheim, it would be the perfect way to exit the sport on top.

Cormier was confident of making it two for two against the Cleveland native, being 15-0 in the division and coming off an emphatic knockout win over his foe will do that. But as camp wore on, the wear of a career spent on the mats and the Octagon showed up on a daily basis. Most would have decided to ask for a postponement.

Cormier didn’t. He showed up on fight night and was winning on all three judges’ scorecards when Miocic caught up to him with a ferocious body assault that led to a stoppage at 4:09 of the fourth round.

“I fought a horrendous fight,” said Cormier, a statement backed up by his longtime manager, coach and friend, Bob Cook. “Even though I was winning, I fought with a s**t ton of emotion, I wasn't myself.

“And on the finish, yes, Stipe Miocic hurt me with that last shot to the body,” he continues. “He hurt me with a punch, but I cut corners in my training because I was hurt. So when my back would start to get tight, we would work around it. Or if anything felt tight, we worked around it because we wanted to get to the fight. So in that moment when Stipe Miocic was finishing the fight, I didn't respond. I didn't shoot a single leg, I didn't grab an under hook, I didn't really do anything because I was so fatigued then that I didn't fight back. I've been hurt worse before in my career. But because I was ready to fight, because I had trained the way I've been known to train, I fought out of those positions. The knee that (Alexander) Gustafsson hit me with was much worse. That was a much bigger shot than I got with from Miocic. The kick that (Jon) Jones hit me with, when I fell, the first thing I did was grab an under hook and I tried to go to a single leg, but Jones, being a great finisher, gave me space and gave me the illusion that I had an out when I really didn't. But I was still fighting. In the Miocic fight, I didn't even have the energy to keep fighting and that was because of the concessions we had to make in my training to just get to the fight.”

It wasn’t the way Cormier wanted to go out of the sport, so here we are. Sure, he didn’t want to wait for Miocic from the injuries he suffered in the fight, and then the COVID-19 pandemic showed up, but he was willing to take as long as necessary to secure one last fight against one of only two men to beat him in a 22-2, 1 NC career. And this time, he’s healthy, he’s been able to train like he wants to, even with old friends Cain Velasquez and Luke Rockhold, and win, lose, or draw, he’s okay with retirement after this weekend’s bout.

As for the reality that there’s something out there to pique his interest for a return, whether it’s a showdown with feared power hitter Francis Ngannou or a third fight with the only other fighter to beat him, Jon Jones, Cormier knows that many fighters’ stories end on a note where people whisper that they shouldn’t have gone to the well one more time. He is determined not to be a part of that list.

“You know what's crazy?” Cormier asks. “At 35, 36, I was like 'I'll beat any of these dudes.' But when you get older, eventually you can't beat these dudes. You might think you can beat them, but you're not gonna. I've been very open with who I am. I feel like today I can still compete with the best in the world. But if the UFC came to me after the last fight (with Miocic) and said, 'You've got to beat a contender or win a couple fights to get a title shot,' I don't know if that's in the cards anymore. It needs to be a championship fight. Because those runs I had to go on to get into my first UFC championship fight, you don't know if you have that in you anymore at 41 years old. I do know that I can go in there on one night and fight with anyone. But you have to be honest with yourself.”

That’s something Cormier has always been. Sure, he’s had the “me against the world” attitude all successful athletes need to rise to the elite level, and he’s taken on challenges many wouldn’t simply because he was stubborn enough to believe he could succeed, but his honesty has endeared him to the UFC fan base and to his peers. He’s shown what’s possible when you do things the right way, and leaving that legacy for his family, friends and fans is more important than any particular belt or victory. And when you put it that way, it’s easy to see why he’s excited about the new life that begins on August 16.

“Everything I do, I compete in,” he said. “So when I'm doing the commentary, I want to be the best commentator. I want to be the best wrestling coach. I want to win in everything. So I have things in my life now that will fill the void. And also, being a part of the UFC's commentary team and being next to the Octagon, you're still part of the show. I don't have to want for much because I'm gonna constantly be around. I'll still continue to call the fights, I'll still do Detail, I'll still do EA Sports. I have so many things to fill the void of competition that I can apply myself to those and hopefully be better in this next part of my career than I even was fighting.”

That would be something to see because he’s been pretty damn good at fighting. But through it all, he’s been an even better man.

“Everybody's made mistakes over the course of their lives, but I feel in the 10-11 years that I've done this, I've tried to do it as best as I can,” said Cormier. “I try to train hard every day, I try to set a good example for not only my teammates, but anyone that's viewing this sport. I want to be able to have people think of the UFC and think of it as a sport where guys like me exist; not the guys that have done the bad things or have had all the run-ins and bad media. I'm just happy that when my career is done, the worst thing that my kids can go back and look at is seeing me and Jon Jones fighting at a press conference. I've tried to do it the right way, and I've tried to show and provide an example for young fighters and everybody that's gonna come behind me that life after fighting should not be feared. It can be something tremendous, and if you're willing to work, everything's right at your fingertips. Use your platform to build a future. And I'm very happy about the way that I did business in fighting. This has been a fairy tale. It really is the American Dream.”