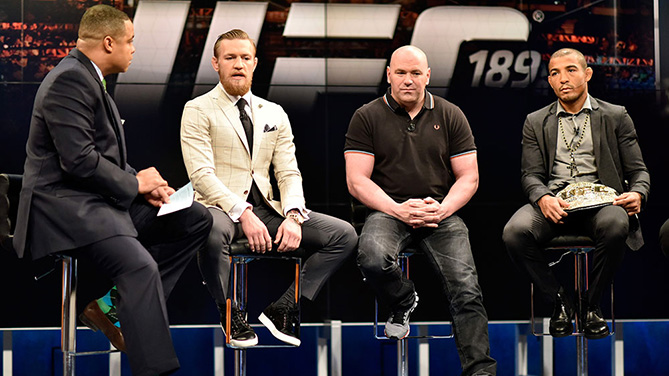 LOS ANGELES
Dana White is on the move. The UFC President rushes through the front lobby of the Montage Hotel in Beverly Hills and swiftly plants himself in the back seat of a waiting black Escalade. It’s just shy of 8 a.m. and a full day of Southern California media appearances promoting the UFC 189 World Tour is ahead.

This was about to become a news-packed day.

Over the next eight hours in Los Angeles, White would crisscross the city and appear on five live television shows on three networks, two radio shows and SiriusXM radio. He would break the news on-air of TJ Dillashaw’s rib injury, halting – for now – Renan Barao’s chance at a rematch at UFC 186 in Montreal.

White will talk about Ronda Rousey’s meeting in Albany, NY with New York State lawmakers this very day, as the UFC’s hugely influential women’s bantamweight champion makes her best pitch to see her sport finally legalized in that stubborn state.

And what about Leila Ali’s challenge to fight Rousey? TMZ’s cameras had caught White at dinner in Beverly Hills late Monday night, and the UFC chief issued this simple challenge to the camera: “Leila, if you’re serious, call me.”
On this day, there is on-air banter about Rafael dos Anjos’ upset victory over Anthony Pettis. And prideful talk about the UFC’s enhanced policy to eliminate performance-enhancing drugs from its ranks.
> WATCH: UFC 189 World Championship Tour Embedded: Vlog Series - Episode 3

But the greatest tension comes as White plays human shield between a seething Jose Aldo and an increasingly brash Conor McGregor, as the combatants for the featherweight title at UFC 189 appear side by side in multiple FOX Sports 1 television segments.

“It’s a disrespect thing, and (my) job, as the guy standing there in the middle, is to make sure nobody gets disrespected physically,” White tells host Max Kellerman during a segment on ESPN’s “SportsNation.” 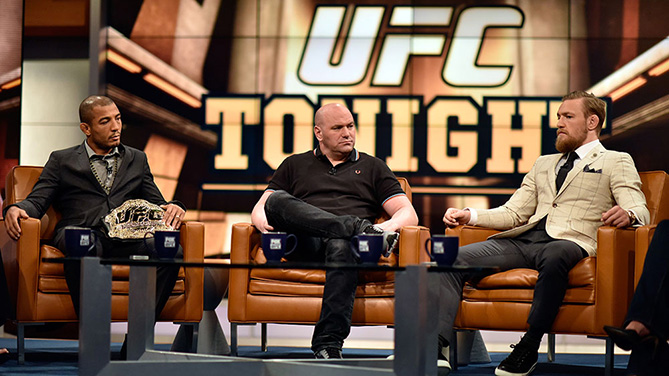 On July 11, the issues between Aldo and McGregor will be formally settled. For now, White and his two fighters continue on to Boston, New York City, Toronto, London and Dublin for more media appearances.

9:30 a.m.: White’s entourage heads north to Burbank. On the way, White asks for a breakfast stop. After a 20-minute detour at Nat’s Early Bite Coffee Shop in Sherman Oaks, White is back on the freeway to Burbank for an appearance on iHeartRadio.

10:15 a.m.: White greets his friend, L.A. radio personality Kurt “Big Boy” Alexander, who has moved to KHHT Real 92.3 FM. The two banter on-air for more than 30 minutes. White reveals that T.J. Dillashaw is out with a rib injury, halting the UFC 186 main event in Montreal. He says Rousey and Ali is unlikely because of Ali’s “huge weight advantage,” and praises Rousey’s empowerment messages for women.

11:25 a.m.: White and entourage arrive at ESPN’s LA Live studios. Three LA Live workers stop him on the sidewalk outside and beg for a picture. White obliges. “Sorry for acting like a schoolgirl,” one worker says, and White shakes his hand.

11:45 a.m.: White appears on ESPN’s “Sportsnation” before a small a live audience. Everyone talks about CM Punk’s UFC training – “He’s working with the best at Anthony Pettis’ gym,” White said. Host Michelle Beadle worries aloud that Rousey is running out of competition, and White assures her, “Everybody wants to fight her.” He repeats the message to Leila Ali about her challenge to Rousey: “Leila, if you’re serious, call me.” White takes swings at the show’s punching machine and scores a 764 on the second try.

1:15 p.m.: White’s SUV stops in a bus zone in Hancock Park so he can do a radio interview with The Jay Mohr Show on FOX Sports Radio.

1:30 p.m. White rushes into the SiriusXM satellite radio studios for a live segment with host Jason Ellis. The two talk about the differences and similarities between boxing and UFC, and White – a huge Manny Pacquiao fan -- predicts Floyd Mayweather will prevail over Pacquaio in May. “Five years ago, I would have said Manny,” White says, “but Floyd has the defense to win this.”

2 p.m.: White is running late to a series of TV spots at FOX Sports studios on Pico Blvd, but the UFC boss is hungry. He asks the SUV to stop at Jimmy John’s sandwich shop near Century City, and sends in an order for six subs – four with sprouts.

2:45 p.m.: White does a digital hit for FOXSports.com with Aldo and McGregor.

3:10 p.m: White tapes a segment with Aldo and McGregor for FOX Sports Live.

3:25 p.m.: White tapes a segment with Aldo and McGregor for “UFC Tonight.”