We Break Down The Ten Fighters Gunning For A Shot At The UFC This Week
By E. Spencer Kyte, on Twitter @SpencerKyte • Sep. 14, 2020

Dana White’s Contender Series heads into its final week before a brief hiatus operating at a record-setting pace.

Through the first six weeks of the season, 23 fighters have been awarded UFC contracts, which is more than were handed out during the inaugural run of the summer talent search in 2017 and the same number awarded over 10 weeks in Season 2.

While it would take a record-breaking six contracts to be awarded on Tuesday night for this season’s total to match last season’s historic output, given the quality of the performances that have been turned in thus far and the slate of bouts on tap this week inside the UFC Apex, this feels like a fitting time to quote Kevin Garnett: “Anything is possible.”

Here’s a closer look at the collection of hopefuls heading into the cage this week, hoping to emerge victorious and have Dana White make their mixed martial arts dreams come true at the end of the night.

Middleweights making their first starts of 2020 square off in the main event as two-time Contender Series veteran Jordan Williams returns to take on Brazilian Gregory Rodrigues.

Williams’ resume is littered with UFC connections, as his first two losses came against current UFC competitors Kazula Vargas and Dwight Grant, while his third setback came last summer on the Contender Series when he landed on the wrong side of a split decision verdict against Ramazan Kuramagomedov. The previous summer, the 29-year-old Nor-Cal Fighting Alliance representative finished veteran Tim Caron in the third round of their clash on Dana White’s summer talent search, but he didn’t earn a contract and the result was overturned to a no contest when Williams’ post-fight drug screening came back positive for marijuana metabolites.

Now the 8-3 middleweight looks to follow in Jamie Pickett’s footsteps by becoming the second three-time competitor this season to collect a victory and a contract as he steps up to take on Rodrigues on Tuesday night.

After stumbling out of the blocks to start his career, Rodrigues carries a six-fight winning streak into this week’s main event. Five of those victories have come by way of finish and the lone decision came two fights back against durable regional circuit standout Tanner Saraceno. The 28-year-old had bouts against Contender Series veteran Anthony Adams and current UFC competitor Joaquin Buckley cancelled earlier this year, but now he finally gets the chance to step into the cage in 2020 for the first time.

On paper, this feels like the kind of fight where the winner is likely to end up securing a contract, provided they turn in a quality performance, as each has proven themselves on the regional circuit.

Will the third time be the charm for Williams, or will Rodrigues extend his winning streak and land a spot on the UFC roster?

Unbeaten in five pro fights, Naimov has earned four straight victories under the Titan FC banner to garner an opportunity to compete on the Contender Series, posting finishes in each of his last two outings. The 26-year-old was born in Tajikistan and is currently training with the Elevation Fight Team in Denver, Colorado, so you know he’s going to arrive in the Octagon well coached and well-conditioned on Tuesday night.

A Michigan State graduate and member of the Scorpion Fighting System crew, Anglin joined his teammate Cody Brundage in making the trip to Factory X Muay Thai in order to prepare for this opportunity. Unbeaten in his last six fights, the 27-year-old has collected four consecutive finishes, but has yet to face any truly experienced foes.

This is a quality matchup between a pair of promising fighters, and how it plays out should help clarify where both Naimov and Anglin stand in their development and if either has what it takes to hang in the UFC’s loaded 145-pound weight division.

Welterweights hold down the middle of this week’s fight card as Korey Kuppe and Michael Lombardo go toe-to-toe in hopes of impressing the UFC brass and securing an invitation to compete in the Octagon.

At six-foot-five, Kuppe is massive for the division and seems to do a good job using his long limbs to lock up finishes, as seven of his eight career victories have come by submission, the lone exception being his last fight, which was stopped due to elbow strikes that were delivered while he had his opponent locked in a triangle choke. The Macomb Martial Arts product submitted recent Contender Series winner Kenneth Cross last February and has won four of five heading into Tuesday night’s encounter with the returning Lombardo.

Back in Las Vegas for the second consecutive year, Lombardo was defeated last summer by current UFC middleweight Kyle Daukaus, which snapped his five-fight winning streak. Less than two months later, “The Don” got back in the win column with a first-round submission victory before closing out his 2019 campaign with a no contest result against veteran Hugh Pulley.

Earlier this year, Lombardo secured a unanimous decision win over Jose Caceres to push his record to 10-2 and send him back to the UFC Apex on a three-fight unbeaten streak.

There have only been two welterweight bouts this season on the Contender Series and both winners — Orion and Louis Cosce — earned contracts, so the pressure is on Kuppe and Lombardo to do enough to join “The Fighting Cosce Brothers” in graduating to the UFC this season.

The 37-year-old Wolf posted 64 wins in the ring and has spent time training at a host of outstanding gyms as she’s built a foundation for her transition to MMA, including Tiger Muay Thai, Kings MMA and Alliance MMA. She is confident that her natural athleticism and boxing acumen will allow her to make a seamless transition from the ring to the cage and onto the UFC stage.

Tennant is 5-0 since turning pro in 2019, registering four of those victories in the Invicta FC promotion. The 31-year-old New Yorker outworked Syndicate MMA staple Serena DeJesus in her Invicta FC debut last year and bested Taylor Guardado to claim the bantamweight Phoenix Series tournament earlier this year, sending her into this high-profile opportunity with a ton of momentum.

Wolf is an intriguing prospect because of her athleticism and past pugilistic success, but crossing over from boxing to MMA can be far more challenging than it looks (ask James Toney) and it will be interesting to see if the MMA neophyte can score an impressive victory in her debut or if Tennant will make her regret getting in the cage on Tuesday night. 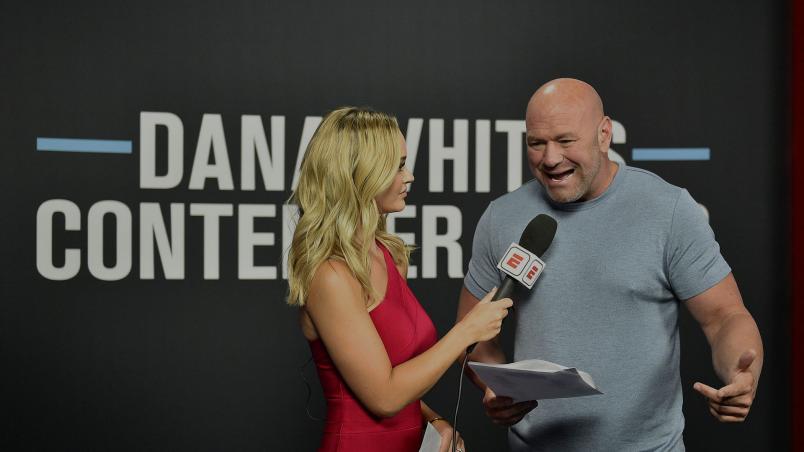 The action on Week 7 gets underway in the featherweight division as East Coast fixture Dinis Paiva Jr. locks up with American Kickboxing Academy representative Kyle Driscoll in this week’s opener.

Literally every one of Paiva’s 20 career fights have come under the CES banner and after going 3-5 to start his career, “Sweetbread” has posted 10 wins in his last dozen fights, which includes a victory over Contender Series grad and ranked UFC flyweight Jordan Espinosa. A talented finisher with serious power for the 145-pound weight class, the Rhode Island native is the type of experienced pro who could make an easy transition into the Octagon and immediately start turning in entertaining performances.

But the same could be said of Driscoll, who carries an 11-3 record and six-fight winning streak into this week’s kickoff contest. The 26-year-old from Tulsa has yet to face anyone as seasoned or polished as Paiva, but he’s handled his business with relative ease over his last six outings and works with an elite camp, so you know he’ll be fully prepared for the challenge that awaits him in Las Vegas on Tuesday night.

Can the popular East Coast staple finally earn a chance to compete on the big stage or will AKA graduate another competitor to the UFC?