Preview all the fights from Week 5 of Dana White's Contender Series
By E. Spencer Kyte, on Twitter @SpencerKyte • Aug. 31, 2020

Through the first four weeks of the season, 16 of the 19 fighters that have stepped into the Octagon and emerged victorious have also taken home a UFC contract, including all five winners on Week 2 and four of the five victorious competitors each of the last two weeks. An 84-percent graduation rate is incredible but speaks to the level of talent and quality of the performances on display inside the UFC Apex over the last month.

This week, a diverse lineup of talent across five different divisions competes in Las Vegas with designs on maintaining the extremely high levels of transference from the Contender Series to the UFC roster through the midway point of this season.

Here’s a closer look at the hopefuls heading into the Octagon this week.

Staten Island’s Buzukja is less than two years into his professional career and heads into Tuesday’s bout on a three-fight winning streak, all of which have come under the Ring of Combat banner. The East Coast organization has a long history of producing high level talent, including the man whose name adorns the gym where Buzukja trains, Chris Weidman.

Is the upstart from the land of the Wu-Tang Clan the next to matriculate to the UFC and make an impact? Not if Baghdasaryan has anything to say about it.

Like his opponent on Tuesday night, the 28-year-old fighting out of Glendale, California is a talented prospect whose true upside is little difficult to gauge as he’s made extremely quick work of a quartet of opponents since losing his professional debut a number of years ago. Though he doesn’t have a great deal of MMA experience, Baghdasaryan is a combat sports veteran with a technical striking game and a ton of upside; it’s just a question of if and when he’ll reach his full potential.

These are the types of fights that are perfect for the Contender Series — early pairings between prospects with undefined ceilings needing a stern test — and it should be all kinds of fun.

A pro for a little more than a decade, Flick has faced a handful of familiar names during his tour of the regional circuit, including UFC vets Will Campuzano and “Brutal” Johnny Bedford, as well as current bantamweight riser Chris Gutierrez. He enters this week’s showdown with Smith on a two-fight winning streak and will look to rely on his sizable edge in experience as he takes on the emerging Elevation Fight Team product.

The 25-year-old Smith is six-for-six in his professional career, including a victory over recent contract winner Jeff Molina in his debut. Like many of the young talents competing this season, finding quality opposition to face has been a difficult task for “The Savage,” but he’s shown his upside by quickly and efficiently dispatching the last four opponents to step into the cage with him.

Will the veteran get the high-profile victory that has thus far eluded him, or can Smith keep it rolling and join his numerous teammates on the UFC roster?

A teammate of last week’s headliner Jhonoven Pati, Johnson arrives in Las Vegas on a five-fight winning streak, having needed less than four minutes to dispatch each of those opponents. He’s taken a step up in competition in his last two outings and his performances haven’t waned, as Johnson wrecked Rafael Costa in two minutes last time out at LFA 78 to close out a 4-0 campaign in 2019.

Lawrence returned from a two-year hiatus last year, registering a pair of victories to push his record to 5-1 heading into his bout with Johnson. The lone blemish on his resume came against Contender Series alum and current UFC fighter Steve Garcia by decision, so he’s already shown he’s capable of hanging with quality competition.

The second fight of the evening takes place in the light heavyweight division as developmental contract recipient William Knight returns looking to turn a second Contender Series victory into a UFC contract with a win over unbeaten Michigan upstart Cody Brundage.

Knight impressed UFC President Dana White enough with his come-from-behind, third-round stoppage win over Herdem Alacebk last season to merit a developmental deal, and after adding a pair of stoppage victories to his resume over the last 12 months, he’s back at the Apex looking to take the next step forward in his career. While Knight did catch the first loss of his career towards the end of 2019, it’s worth noting that he lost to Tafon Nchukwi, an undefeated prospect slated to compete on the Contender Series later this season.

The 26-year-old Brundage enters Tuesday’s contest with a 5-0 record and has only been a pro since April 2019. He’s mauled middling competition on the regional circuit and is taking a considerable step up in competition here, but works with a quality team with a lot of top tier experience that includes recent contract winner Josh Parisian, Invicta FC standout Alesha Zappitella, and Brundage’s wife, former TUF finalist and six-time UFC competitor Amanda Cooper.

Only two other fighters have garnered developmental deals in the past, and both have subsequently made their way to the UFC. Will Knight make it three-for-three or can Brundage keep his momentum rolling and collect the biggest win of his career? 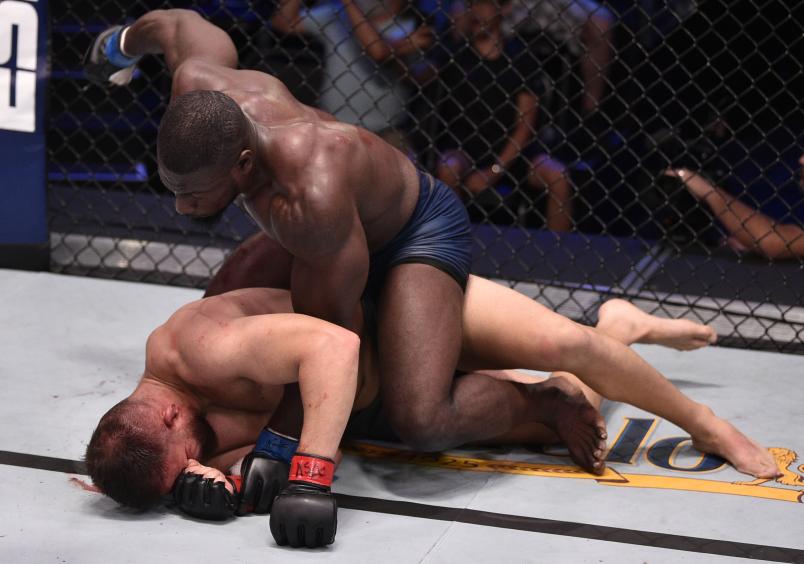 Lutz lost his professional debut in the fall of 2015 and hasn’t looked back since, registering nine consecutive victories and taking care of business every time out, posting eight finishes over his nine-fight run of success to land a spot competing on the Contender Series

The 30-year-old Gibson has been steadily churning out a couple appearances a year since turning pro at the end of 2014, posting an 8-2 record over his last 10 fights, and carrying a two-fight winning streak in Tuesday’s opener. He’s trained with a collection of quality pros in the past and faced two-time UFC vet Horacio Gutierrez last September, so he should be more than ready to deal with whatever Lutz brings to the table this week in Las Vegas.