One week after history was made inside the UFC Apex, where Dana White handed out contracts to all five victorious fighters, the action returns to the Octagon for the fourth week of Season 3 of the Contender Series. 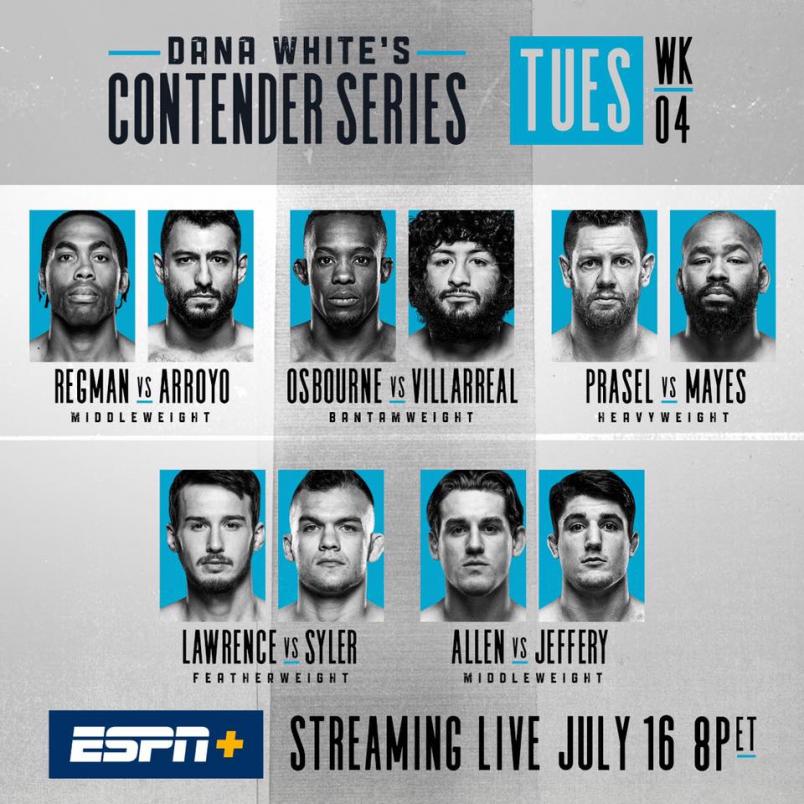 Here’s a look at the five pairs of competitors looking to join the nine athletes who have heard the call to the Octagon already this season.

Hailing from Brick, New Jersey, Regman is a veteran of the tough East Coast regional scene, having made appearances in both Ring of Combat and CFFC over the years. Last time out, “The Predator” stayed close to home, but made his debut under the LFA banner, registering a first-round stoppage win over Contender Series alum Will Santiago in Atlantic City.

Now riding a four-fight winning streak built entirely of finishes, the 27-year-old middleweight has seen matches with the likes of Maki Pitolo and Eric Spicely fall by the wayside in recent years and he’s eager to perhaps reset those matchups on the biggest stage in the sport.

Looking to derail those plans and earn a place for himself in the UFC is Arroyo, who scored a unanimous decision win on the all-Brazilian edition of the Contender Series last summer. That victory pushed his own winning streak to four and he was scheduled to face recent UFC debutant Wellington Turman earlier this year, so he too has a familiar name to target right out of the chute if he’s able to get through Regman and hear Dana White call his name at the end of the night.

Three straight victories in the LFA cage have earned Villarreal a look this week on the Contender Series. The 29-year-old, fighting out of Waco, Texas, followed up a 2-0 year in 2018 with a third-round stoppage win over Devin Miller last time out that has put the Blitz Sport MMA product on the radar as a potential addition to the talented featherweight ranks.

Fighting out of the Pura Vida BJJ/MMA team that produced current UFC competitors Montel Jackson and Leah Letson, as well as two-time Contender Series competitor Alton Cunningham, Osbourne similarly looks to push his winning streak to four by turning back his toughest challenger to date. Osbourne has made quick work of his last three opponents, finishing each inside the opening five minutes, and if he’s able to do the same to Villarreal, there is a very real chance that he joins his teammates on the UFC roster.

Mayes becomes the first competitor to appear on all three seasons of the Contender Series and looks to finally deliver the kind of effort that will land him a place on the UFC’s heavyweight roster.

The towering Mayes arrived with a lot of hype, but lost his first appearance in Las Vegas to Allen Crowder. Since then, the 27-year-old has registered a decision win over Mohammed Usman, a second-round finish in his Contender Series return last summer and a subsequent finish in his last outing. If he can push his winning streak to four and show continued improvements, the third time could be the charm for the six-foot-six prospect.

While size is usually an advantage for Mayes, he’ll actually be the shorter of the two men in the cage on Tuesday, as Prasel is an inch taller than his American adversary. The Brazilian has a more impressive record on paper, boasting 10 wins in 11 starts, including a series of early finishes. It will be interesting to see how he responds to fighting in the United States for the first time and taking a step up in competition against the powerhouse Mayes. 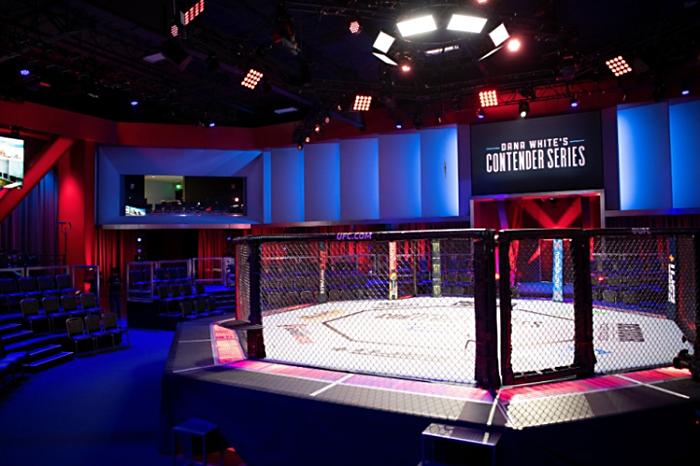 This week’s entry in the “Someone’s 0 has got to go” series comes at featherweight, where the unbeaten Kentucky native Lawrence squares off with the Bolivian-born American Top Team product Syler.

Not only is Lawrence perfect through five starts, but he’s finished each of those outings as well, including earning a 24-second submission win over one of last week’s victors, Jonathan “JSP” Pearce. Fighting primarily in South America, Syler has racked up eight straight wins and five straight finishes heading into his Contender Series appearance, setting the stage for what should be a spirited battle in the 145-pound ranks.

Featherweight is flush with talent, which makes cracking the roster a little more difficult, but if these guys perform the way they have thus far on Tuesday night, they’re bound to get a good, long look from the UFC brass.

The opening bout of the week is easily the pairing between the most UFC-ready competitors on the card.

Allen is the latest LFA middleweight champion looking to make the move to the Octagon, as he hopes to follow the same path that carried Ian Heinisch and Anthony Hernandez to the UFC, where they joined fellow titleholders Eryk Anders and Markus Perez. The 23-year-old Roufusport product has earned three straight wins since dropping a decision to Hernandez and has been considered one of the best middleweight prospects outside the UFC for the last couple years.

Fighting out of Tillsonburg, Ontario, Jeffery has rattled off four straight wins since suffering the lone loss of his career at the end of 2015. The Brock University alum scored a fourth-round stoppage win over Jo Vallee in March to claim the vacant BTC Fight Promotions middleweight strap and with a win over the reigning LFA champ to his resume in Tuesday’s opener, the 26-year-old could become the latest Canadian to join the UFC roster.