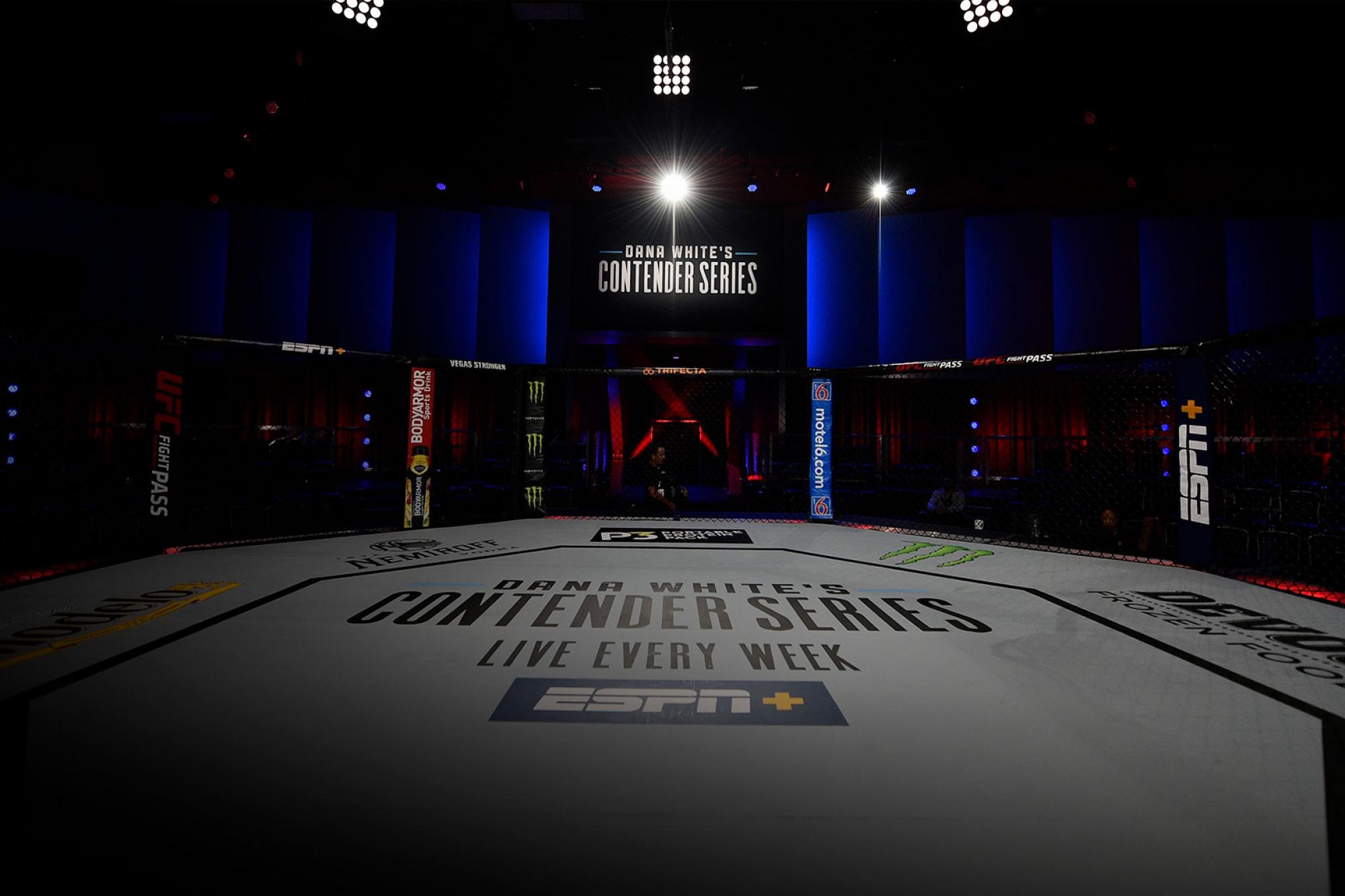 Tuesday night action returned to the UFC Apex this evening as Season 4 of Dana White’s Contender Series got underway in Las Vegas.

Over the past three seasons, the summer talent search has seen 68 fighters garner UFC contracts and numerous more eventually make their way into the Octagon after introducing themselves to Dana White, Sean Shelby, and Mick Maynard via the early week auditions.

As with seemingly everything in 2020, this week’s debut episode faced some challenges over the last week that shifted opening night from a five-fight card to a four-fight affair, but the reduced number of contests hitting the cage didn’t mean a reduction in action.

Two fighters earned finishes on Tuesday night’s Season 4 debut and both collected contracts as lightweights Jordan Leavitt and Uros Medic parlayed their impressive first-round stoppage wins into the opportunity to compete inside the UFC Octagon.

Veteran light heavyweight Dustin Jacoby also secured a return to the UFC after delivering a dominant performance against Ty Flores in the main event.

Here’s a look at how everything went down on the first week of Season 4 of the Contender Series.

Luke Flores looked to become the latest returning Contender Series alum to make the most of his second opportunity to compete in Las Vegas as he took on unbeaten local lightweight prospect Jordan Leavitt in the opening bout of the season.

It took Leavitt just over 10 seconds to change levels and attack a single leg as he looked to put Flores on the canvas. Following a minute of cat-and-mouse as Flores looked for openings with Leavitt defending and trying to assert control, the Syndicate MMA product took charge on the ground, staying one step ahead of the Diego Ferreira protege Flores, landing sporadic shots and searching for openings.

With just under a minute remaining in the round, Leavitt quickly cinched up an arm-triangle choke, squeezing out a tap from Flores. This was a smooth, effortless performance from the unbeaten lightweight and an impressive way to kick off Season 4 of the Contender Series.

Young flyweights eager to impress Dana White and the UFC matchmakers met in this one as 21-year-old Luis “Lazy Boy” Rodriguez and 25-year-old Jerome “The Renegade” Rivera collided in hopes of collecting a UFC contract.

An early slip from Rodriguez created a massive opportunity for Rivera, as the LFA veteran quickly followed his Mexican opponent to the floor, taking his back and locked up a body triangle, but Rodriguez was eventually able to turn into Rivera, break free, and get back to his feet. The remainder of the round was a give-and-take, with Rodriguez landing the heavier shots and Rivera looking for takedowns and to entice Rodriguez to engage on the ground.

It was more of the same early in the second, with Rodriguez throwing smoke and Rivera closing the distance and initiating the clinch. While Rivera continued to press forward and score with inside kicks, Rodriguez did well to respond with solid strikes and countered with a high amplitude takedown of his own.

Just past the midway point of the round, Rodriguez locked up a combination triangle choke and armbar attempt while stuck in tight along the fence, adding in a series of solid elbows as Rivera was stuck in an unfavorable position.

Rivera came out connecting with kicks to begin the third, but Rodriguez seemed to pay them no mind, closing the distance to look for a takedown. Rivera fought it off well, countering with elbows and a triangle attempt. Rodriguez worked free and stayed sticky, continuing to control the action on the canvas.

With just over two minutes remaining in the fight, the flyweight hopefuls got back to their feet, but only for a moment, as Rivera shot for another takedown, only to have Rodriguez stuff the shot and land in top position before getting overzealous with a back-take attempt and sliding off. They continued to battle tooth and nail on the ground through the final 45 seconds, with neither man gaining a discernible advantage.

When the scores were tallied, the judges were unanimous, awarding the decision to Rivera.

Prospects looking to join the UFC’s ultra-competitive 155-pound ranks lined up across the cage from one another in this one as the undefeated Uros Medic faced California regional circuit veteran Mikey Gonzalez.

These two started trading kicks right out of the chute, but it was Medic who connected with the heavier shots, folding Rodriguez up with a kick to the liver early in the frame. While Rodriguez recovered and got back to his feet, it wasn’t for long, as Medic continued to press forward and punish Rodriguez, dropping him with a left hand/low kick combination that proved to be the beginning of the end.

“That’s why they call me ‘The Doctor,’” Medic said as he waited for the scores to be read, “because I make them bring in the nurse.”

The experience disparity and difference in fluidity between these two was apparent immediately, as Jacoby pressed forward with measured, powerful shots as Flores looked to counter with somewhat labored, less effective strikes of his own. Surprisingly it was Jacoby who brought the fight to the floor first, briefly locking up a D’Arce choke and dragging Flores to his knees with it before releasing the hold and continuing to unload on the feet through to the horn.

Flores came out a little more aggressively to start the second, looking to press the action and close the distance, only for Jacoby to stuff his level change and start unloading with varied attacks that again sent Flores searching for a takedown. Back in space, the game, but busted up Flores got backed into the fence and beaten up some more. A straight left hand from Jacoby wobbled Flores and sent Jacoby in search of the finish, but referee Herb Dean allowed them to continue.

Late in the round with Jacoby showing signs of fatigue, it was Flores who landed a heavy knee up the middle to create some intrigue heading into the third frame.

After a profanity-laced pep talk from Sean Madden in his corner, Flores again came out swinging, bringing the fight to Jacoby to start the third. A minute into the round, the tired light heavyweights landed in the clinch along the fence, trading knees and short punches inside before separating into space. Jacoby once again looked at a D’Arce choke on the canvas before abandoning the hold, leading to the duo getting back to their feet and battling in close on the fence.

With just over a minute left in the round, Flores finally dumped Jacoby to the canvas, but he wasn’t able to keep him there, as the veteran got back to his feet, backing out in front along the cage, and out of danger.

The torrid pace of the first two rounds turned this into a slog down the stretch, but Jacoby showed his impressive striking early, while Flores’ toughness was on display throughout.

When the judges added up the eights, nines, and tens, the scores came out unanimously in favor of the UFC veteran Jacoby.