Preview all the fights from Week 4 of Dana White's Contender Series
By E. Spencer Kyte, on Twitter @SpencerKyte • Aug. 24, 2020

A dozen contracts and a handful of initial assignments have already been doled out through the first three weeks on the fourth season of Dana White’s Contender Series and there is no reason to believe that the torrid clip will slow any time soon given the quality of action slated to hit the Octagon over the next several weeks in Las Vegas.

Last week, history was made as the brother tandem of Louis and Orion Cosce both competed, both won, and both earned contracts, with the former scoring a first-round stoppage win over Victor Reyna in the main event, and the latter grinding out a third-round finish against the previously unbeaten Matt Dixon.

Joining “The Fighting Cosce Brothers” in graduating from the Tuesday night talent search to the UFC roster were heavyweight Josh Parisian, who scored his second first-round finish on the Contender Series by thumping Chad Johnson, and strawweight prospect Cheyanne Buys, who pushed her record to 5-1 by beating up Hilarie Rose for 15 minutes, impressing Dana White with her performance and her swagger.

This week’s collection of fights is headlined by the second fighter to make three Contender Series appearances returning in search of his first victory against a proven finisher coming off a first-round stoppage win over a previous Season 4 headliner, plus a lightweight matchup featuring a pair of seasoned competitors, a clash of flyweight upstarts and more.

Here’s a closer look at this week’s slate.

The 29-year-old Pati is just 6-3 in his professional mixed martial arts career, but a closer inspection of his record shows finishes in each of those six victories, including a second-round submission win over Week 2 headliner Joe Pyfer, and losses coming to a trio of talented fighters, including current UFC competitors Punahele Soriano and Ryan Spann.

Pickett is hoping that the third time is, in fact, the charm as he returns to Las Vegas still searching for his first Contender Series triumph. He lost to Charles Byrd on Season 1, earned two stoppage victories, and then lost to the aforementioned Soriano on last season’s opening episode, meaning that half of his professional losses have come in front of Dana White.

Pickett showed flashes in each of his first two trips into the Octagon, but has yet to put together a complete performance on the show, and Pati profiles as the kind of fighter who is going to make you pay for your mistakes and has a nose for finishing. 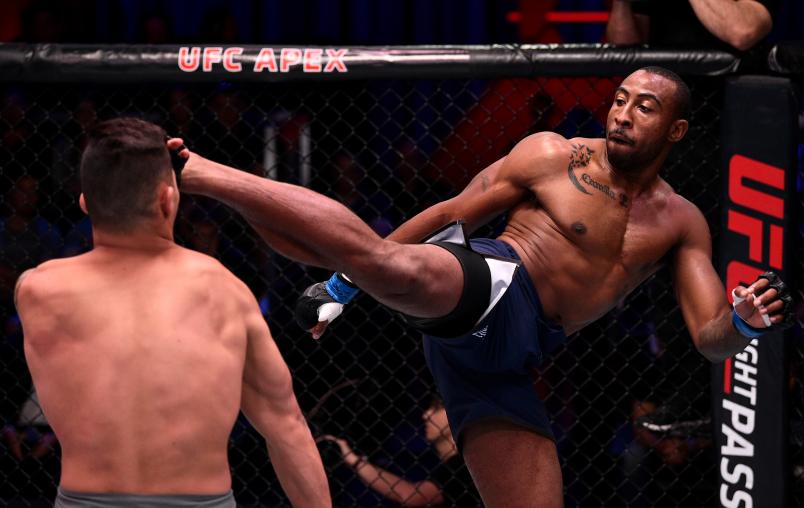 Two of the more seasoned competitors to grace the Octagon so far this season, Rafael Alves and Alejandro Flores go head-to-head in this meeting of experienced lightweights.

Alves arrives in Las Vegas on a four-fight winning streak, having picked up the Titan FC interim lightweight title last time out. Training out of MMA Masters in South Florida, the Brazilian has watched teammate Miguel Baeza turn a quality performance on the Contender Series into immediate success in the UFC and is hoping to begin his efforts to replicate that journey with a victory on Tuesday.

A staple under the Combate banner for the last several years, Flores trains in the Chicago area under striking coach Mike Valle and is 9-1 over his last 10 outings. The 29-year-old has gone the distance in seven of his last nine victories and has faced solid competition on his way to competing on the summer talent search.

The lightweight division is loaded with talent, so it’s going to take something special out of Alves or Flores in order to stand out and secure a contract.

Silva lost the first two bouts of his career, but hasn’t looked back since, rattling off six consecutive victories to earn a look on the Contender Series. Splitting time between LFA and Fury FC, the 32-year-old Texan earned a finish in each of those triumphs, including a first-round stoppage win last time out against Christian Lira in February.

A 23-year-old prospect representing Kansas City who trains under UFC veterans Jason High and James Krause, Molina also stumbled out of the gate, dropping two of his first three appearances before finding a groove and posting six straight victories. Like Silva, he maintained his winning ways with a submission victory in February.

Lightweights looking to take the next step forward in their careers meet at the Apex as “Money” Mike Breeden faces “The Genius,” Anthony Romero.

Another member of the Glory MMA and Fitness crew helmed by James Krause, Breeden has posted three straight victories heading into Tuesday’s fight card, bouncing back from a 1-2 year in 2018 with a trio of stoppage wins in 2019. This is a step up in competition for the 31-year-old but fighting alongside a teammate and with a seasoned coach like Krause in his corner, Breeden should be fully prepared to put on a show come Tuesday night.

Boasting a perfect 7-0 record, the 23-year-old Romero has actually won 15 consecutive fights dating back to his amateur days and arrives in Las Vegas off a 58-second knockout win in early March. The Brock University alum has never faced an opponent with a losing record and handled every assignment he’s been presented thus far, but Breeden is the most experienced fighter he’s faced to date, so it will be interesting to see how he does with a step up in competition this week on the Contender Series.

The opening bout of the evening takes place in the middleweight division, where streaking Kyron Bowen squares off with promising upstart Collin Huckbody.

Bowen touches down on the Contender Series riding a seven-fight winning streak, earning each of those victories inside the distance and four of those wins in the opening round. The 26-year-old’s ability to handle business swiftly and without the judges needing to be involved is a major plus as he steps into the Octagon on Tuesday night.

Huckbody has won four straight since dropping a unanimous decision to Contender Series graduate Bevon Lewis at LFA 38, finishing each of his last two victories via arm triangle choke. This will be an opportunity to see how he matches up against a proven finisher riding a wave of momentum.