As The Fifth Season Of Dana White's Contender Series Quickly Approaches, Take A Look Back At A Breakdown Of The Entire Third Season
By McKenzie Pavacich, on Twitter @mpavacich_ • Aug. 12, 2021

The third season of Dana White’s Contender Series helped usher in the ESPN era in 2019, expanding the show from eight to ten episodes, nearly doubling the number of contracts awarded compared to the first season.

As we gear up for the fifth season of hopefuls from around the world vying for their shot at a UFC contract, let’s take a look back at the third season, where we heard some of the biggest up-and-coming names for the very first time.

Undefeated with all wins coming by way of finish, Punahele Soriano first stepped into the Octagon on June 18, 2019, in his Dana White’s Contender Series bout against Jamie Pickett at middleweight. The dominant decision victory earned Soriano his UFC contract, with his opponent earning a contract of his own the following season.

Heavyweight Yorgan de Castro earned his fourth professional knockout and a UFC contract of his own with a first-round finish over Alton Meeks. While Hannah Goldy and Bill Algeo didn’t leave the UFC APEX with UFC contract that night, they would both go on to make UFC debuts in 2019 and 2020, respectively. 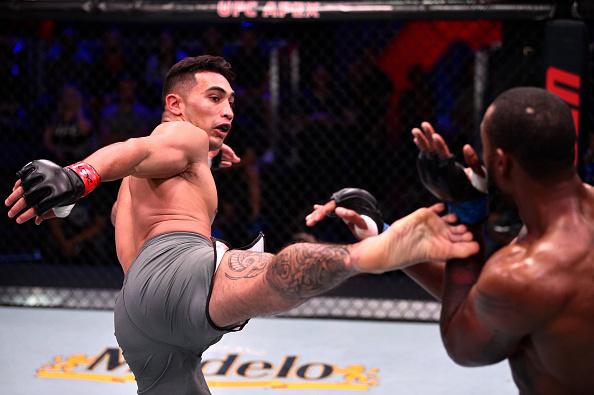 Miles Johns and Miguel Baeza started off a night defined by unanimous decisions with strong enough statement wins to both earn UFC contracts. Both extended undefeated streaks with their wins inside the UFC APEX, and in their UFC debuts, and have since racked up three wins and just one loss inside the Octagon.

While middleweight Kyle Daukaus wasn’t awarded a contract on Contender Series, he was called up a year later to make his debut against Brendan Allen at UFC Fight Night: Poirier vs Hooker. 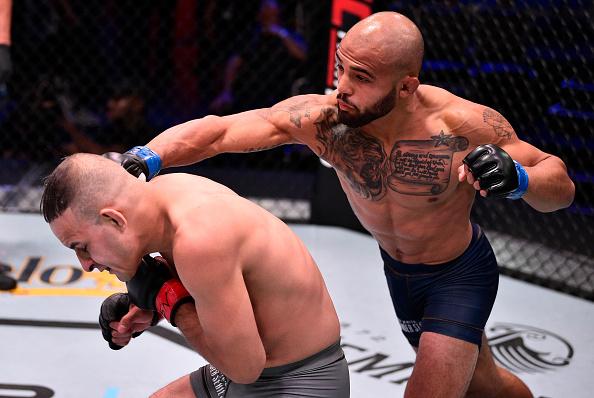 Something must’ve been in the air on July 9, 2019, as all five winners of their bouts were awarded UFC contracts before leaving the UFC APEX. Lightweight Joe Solecki has since strung together three wins, bringing his professional win streak to six.

**Antonio Trocoli’s submission victory was overturned to a no contest and his contract revoked after a failed drug test. 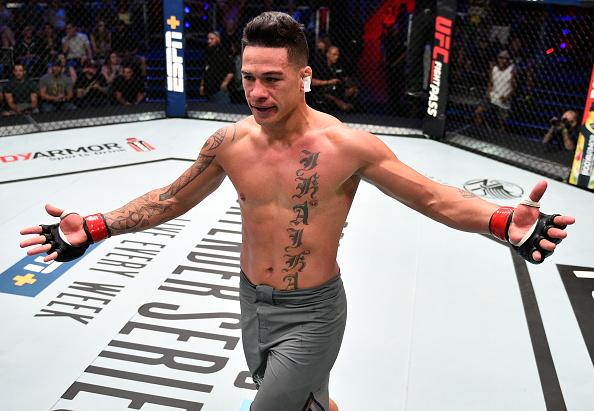 Maki Pitolo celebrates after his TKO victory over Justin Sumter in their middleweight bout during Dana White's Contender Series at the UFC Apex on July 9, 2019 in Las Vegas, Nevada. (Photo by Chris Unger/DWCS LLC)

Following in the wake of a generous third episode, episode four gave way to four more UFC contracts in a night filled with finishes. Three submissions by three different methods and a TKO left Dana with no choice but to award the most entertaining performers with contracts of their own.

Middleweight Brendan Allen, who had an extensive professional career prior to landing inside the Octagon, has made the most of his time since earning his contract on Contender Series, going 5-1 since he first joined the UFC roster two years ago. 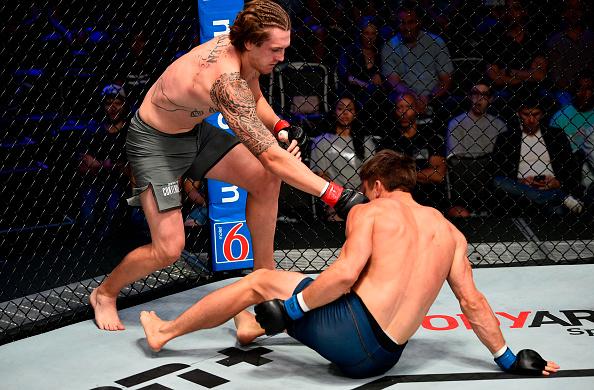 While just three contracts were awarded on episode five, three more athletes who fought on this night would go on to earn UFC contracts on their own. Knockouts were the secret ingredient for success, as Sean Woodson’s flying knee and Jamahal Hill and Billy Quarantillo’s TKOs by way of punches spoke louder than any words could have, and all three winners by finish left the UFC APEX with contracts in hand.

Welterweight Jordan Williams and featherweight Kamuela Kirk made their debuts in 2020 and 2021, respectively, and who can forget Terrance McKinney stepping in on short notice to take on Matt Frevola in his UFC debut at UFC 263, which he managed to end in just seven seconds with a single combination? 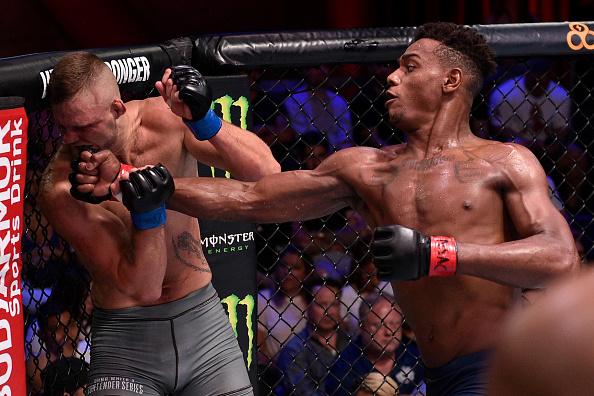 Seven of the ten athletes competing on episode six made their way to the UFC, either by winning a contract thanks to their standout performances, or a little further down the line. Heavyweight Rodrigo Nascimento opened the night with a first-round submission and while Daniel Rodriguez’s unanimous decision victory wasn’t enough to get it done in the APEX, he’d join the UFC six months later, submitting Tim Means in his debut.

The final three fights of the night delivered in big ways, with flyweight Tracy Cortez, featherweight Aalon Cruz and light heavyweight Aleksa Camur all coming away from their performances with UFC contracts. Fabio Cherant and Mariya Agapova also went on to break into the UFC following their appearances on Contender Series. 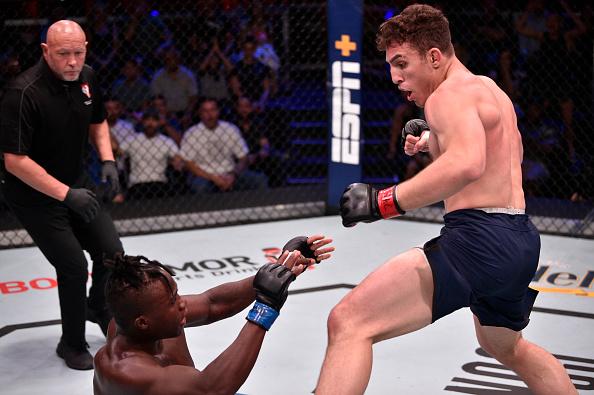 In episode seven, finishes once again dictated whose laps the contracts landed in, as middleweight André Muniz, featherweight Herbert Burns and lightweight Omar Morales all managed to get it done inside the distance. 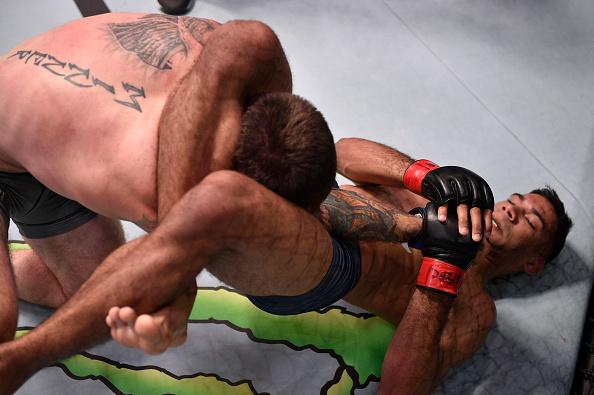 Episode eight gave way for four more UFC contracts, with William Knight earning a developmental contract with his finish over Herdem Alacabek with just 26 seconds remaining in the fight, and Brok Weaver, Sarah Alpar and Tony Gravely all walked away from the UFC APEX with contracts of their own.

Bantamweight Shanna Young went on to make her UFC debut in February 2020 against Macy Chiasson. 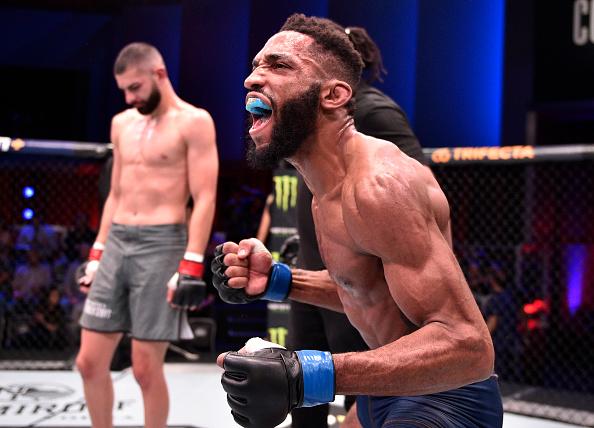 Only one performance in episode nine did enough for Dana to award a contract, and it was Phil Rowe who got to sign his name on the dotted line to secure his spot in the UFC. Rowe’s third-round TKO over Leon Shahbazyan was followed by a year-and-a-half layoff before making a proper debut in February of 2021.

Strawweight Mallory Martin and now-featherweight Steve Garcia each eventually made their UFC debuts following their performances on Contender Series. Martin stepped in to take on Virna Jandiroba less than four months after first fighting in the APEX, while it would be a year and a half before Garcia had the opportunity to grace the Octagon. 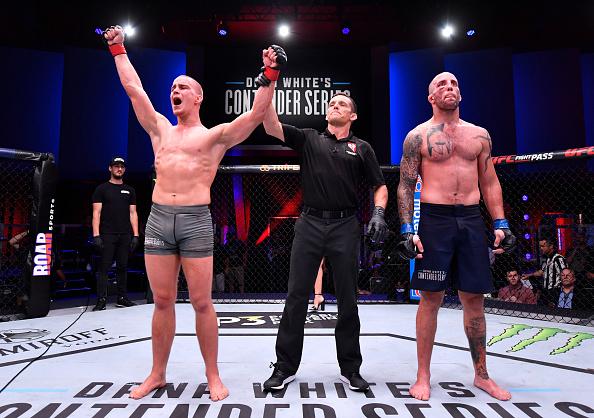 While Impa Kasanganay’s unanimous decision victory over Kailan Hill wasn’t enough to get the job done in the APEX the first time around, he made a return the following year to secure his contract on the fourth season of Contender Series before making his debut, all inside two weeks in August of 2020.