Get ready for season five by looking back at the previous seasons of DWCS, starting with the show’s wild first season back in 2017.
By Gavin Porter, On Twitter @PorterUFCNews • Aug. 10, 2021

After four seasons of stunning moments, crazy fights and UFC contracts, Dana White’s Contender Series is back. On August 31, season five gets underway, as hopefuls from around the world get their chance to compete in front of the UFC President at the UFC APEX.

With only a small crowd that consists of friends, family and few spectators, the intimate setting was perfect to get to know the athletes and give them the platform to succeed. If you look back at the talent that came from the show’s first season, it’s rather remarkable to see just how many contenders came from season one.

Watch Season One Of DWCS On UFC Fight Pass

This was the first opportunity to be introduced to fighters such as Sean O’Malley, Dan Ige, Geoff Neal, Alex Perez, Ricky Simon, Kennedy Nzechukwu and plenty more.

Get ready for season five by looking back at the previous seasons of DWCS, starting with the show’s wild first season back in 2017. 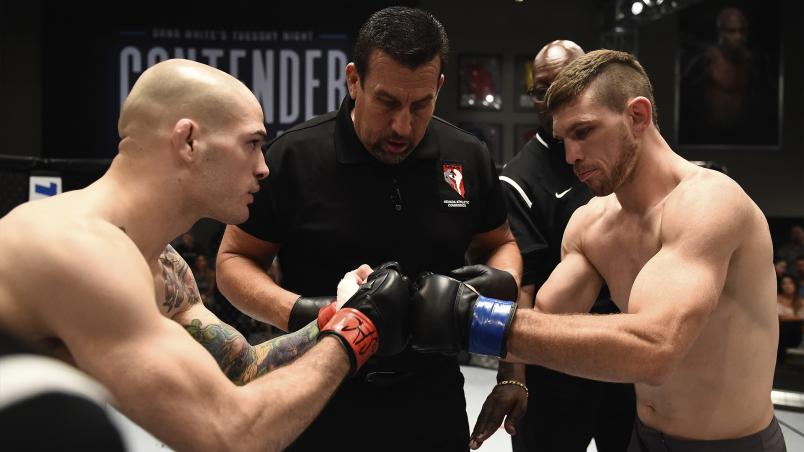 Heading into the first episode of DWCS, fans and fighters alike didn’t know what to expect from the show. But as the fights started going down in the old Ultimate Fighter gym, it was clear that the pressure of the show brought out the best of the contestants.

Kurt Holobaugh impressed in the main event by knocking out Matt Bessette early in the first round and Boston Salmon taking out future Return of The Ultimate Fighter semifinalist Ricky Turcios in a Fight of the Night-quality scrap. Only Holobaugh and Salmon were awarded contracts after the event.

Kurt Holobaugh vs Matt Bessette – No Contest (Overturned) round 1 at 2:59

Charles Byrd def. Jamie Pickett – Submission due to an Arm Triangle Choke in round 1 at 4:55

At one point or another, seven of the ten contestants (Holobaugh, Bessette, Anyanwu, Salmon, Byrd, Pickett and Sanchez) from the inaugural episode of DWCS would go on to fight in the UFC.

The second episode of DWCS arguably produced its biggest star in current UFC bantamweight Sean O’Malley. With Urijah Faber and Snoop Dogg adding extra commentary, the “Sugar Show” was in full force as O’Malley put on a striking clinic in his bout against Alfred Khashakyan and earned a contract after his walk-off KO win.

Watch Season 5 Of DWCS On ESPN+

O’Malley was the only fighter from the episode to earn a UFC contract, and thanks to his charisma and fighting style, he became one of the hottest newcomers in the UFC.

Daniel Spohn def. Angel DeAnda – Submission due to an Arm Triangle Choke in round 1 at 3:10

Although he didn’t earn a contract in his first DWCS appearance, Casey Kenney never gave up on his UFC dream. He would go on to fight on DWCS episode 8 just six weeks later… 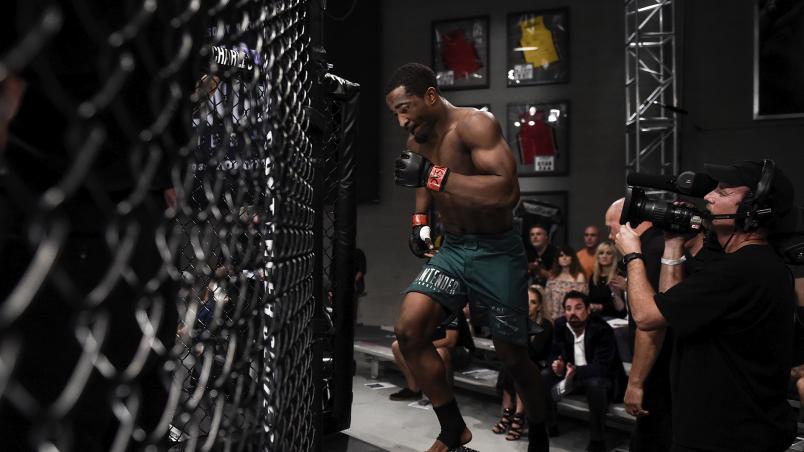 Geoff Neal enters the Octagon prior to his middleweight bout with Chase Walden during Dana White's Tuesday Night Contender Series at the TUF Gym on July 25, 2017 in Las Vegas, Nevada. (Photo by Brandon Magnus/DWTNCS)

The third episode of DWCS featured big-time action as all five fights were stopped prior to reaching the judges’ scorecards. It was the most exciting episode of the series yet and featured multiple names that UFC fans would become familiar with.

White decided to award Roberson and Neal with UFC contracts for their performances.

Dan Ige def. Luis Gomez – Submission due to a Rear Naked-Choke in round 3 at 3:23

Although Ige, Menifield, and Spann didn’t earn contracts in their first DWCS bout, they would all be in the UFC soon enough. 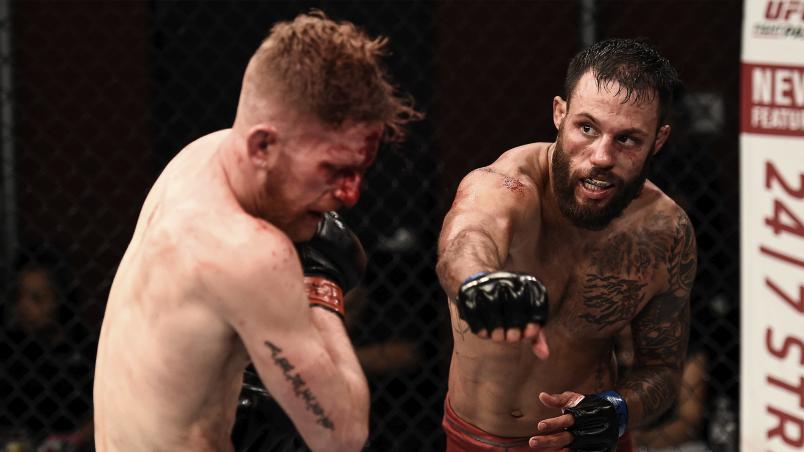 Episode four featured one of the most entertaining fights of the season, as Brandon Davis and Austin Arnett engaged in a three-round war that left every person inside the TUF gym cheering. Davis’ impressive performance earned him a contract.

Phillips would later go on to be a contestant on season 28 of The Ultimate Fighter before fighting in the UFC in 2020. Hawes has not lost since that bout with Marquez, and he would eventually go on to earn a contract on season four of DWCS. Castenada made his UFC debut on short notice in 2020 and recently got a TKO victory over Eddie Wineland in his latest UFC bout. 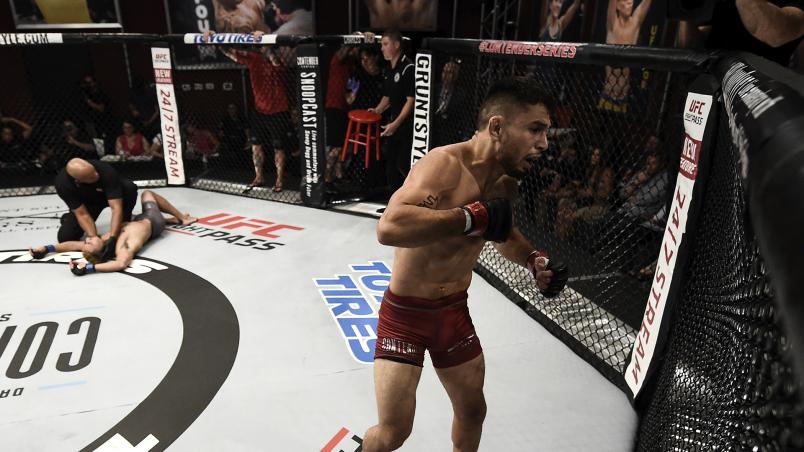 Alex Perez reacts to his submission victory over Kevin Gray in their flyweight bout during Dana White's Tuesday Night Contender Series at the TUF Gym on August 8, 2017 in Las Vegas, Nevada. (Photo by Brandon Magnus/DWTNCS)

After an awesome episode four, the fighters on the fifth week of DWCS absolutely brought it. The four finishes made it tough on White and company to pick which fighters to sign to the big show but, in the end, only two fighters were selected.

Alex Perez def. Kevin Gray – Submission due to an Anaconda Choke in round 1 at 2:54

Even though they didn’t receive contracts, Arce and Simon would eventually make it into the UFC in 2018. 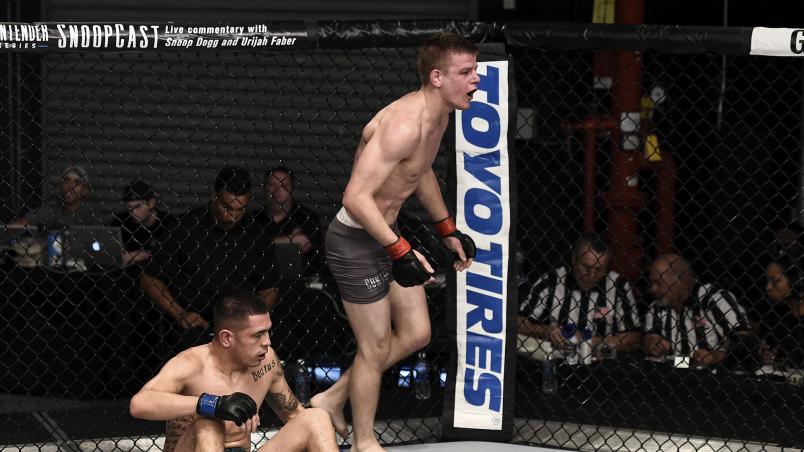 Grant Dawson reacts to his submission victory over Adrian Diaz in their featherweight bout during Dana White's Tuesday Night Contender Series at the TUF Gym on August 15, 2017 in Las Vegas, Nevada. (Photo by Brandon Magnus/DWTNCS)

The sixth week of DWCS belonged to the submission specialists, as Charles Byrd and Grant Dawson both earned contracts by securing second-round rear naked choke wins. It was Byrd’s second submission win on DWCS in just five weeks.

Charles Byrd def. Buddy Wallace – Submission due to a Rear-Naked Choke in round 2 at 2:03

Grant Dawson def. Adrian Diaz – Submission due to a Rear-Naked Choke in round 2 at 1:15

Jamie Colleen def. Tiffany Masters – Submission due to an Armbar in round 3 at 4:43 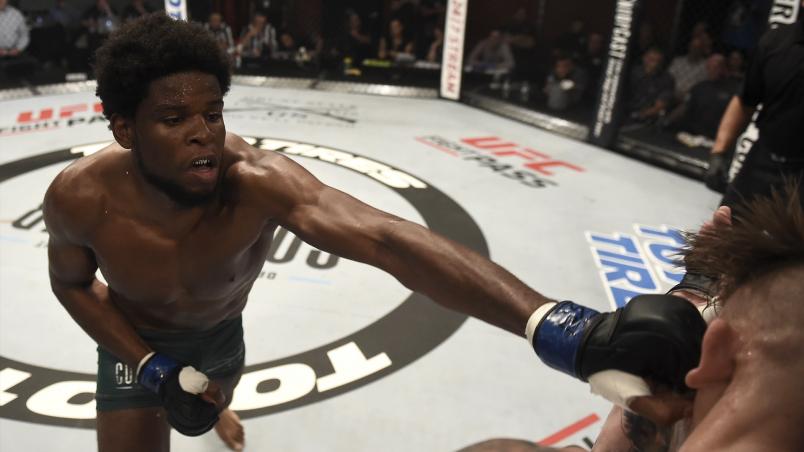 After leaving episode one with a win but without a contract, Joby Sanchez’s TKO victory over JP Buys earned the flyweight one of two contracts handed out by White. The other contract belonged to Team Alpha Male’s Benito Lopez after his split decision win over Steven Peterson.

Jordan Espinosa def. Nick Urso – Submission due to a D’Arce Choke in round 1 at 1:23

Nzechukwu, Peterson, Buys, Santiago and Espinosa would all eventually fight in the UFC despite missing out on contracts in the episode. Nzechukwu, Espinosa and Buys took advantage of second chances on DWCS by finishing their opponents and getting that elusive UFC contract. 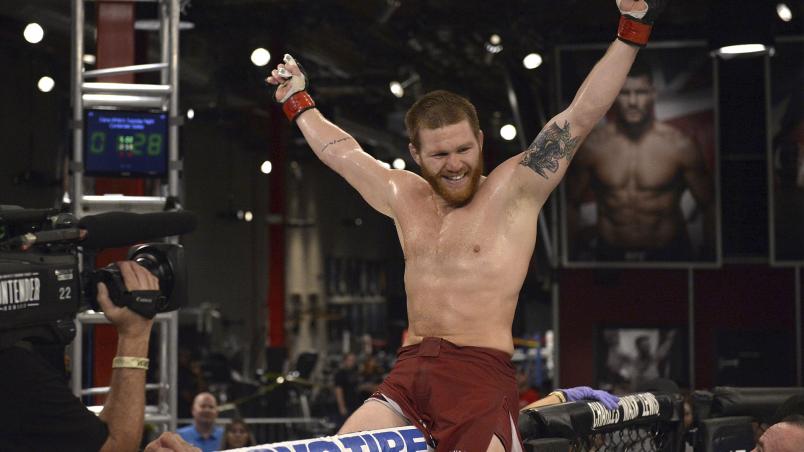 The final episode of the season was also the episode where White handed out the most contracts. Matt Frevola, Lauren Mueller and Allen Crowder all made it to the UFC with their dominant performances. In addition, Bevon Lewis was given a developmental contract.

Matt Frevola def. Jose Flores – Submission due to an Arm-Triangle Choke in round 2 at 3:32

Despite losing in his second DWCS appearance of the season, Kenney would get signed into the UFC in 2019. Just a few months later, Mayes would make his UFC heavyweight debut.