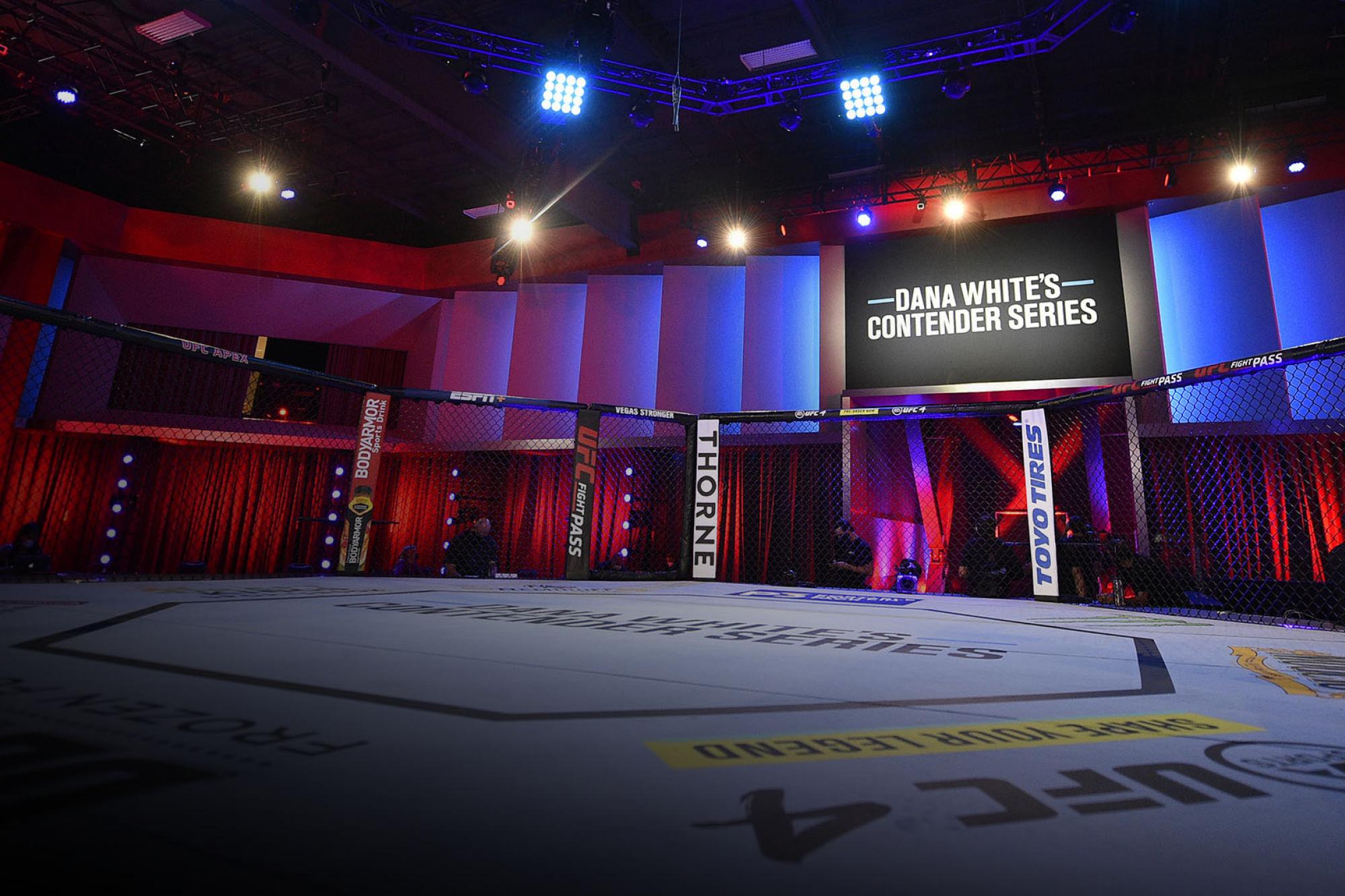 This week, a full slate of five bouts hit the cage, bringing 10 more hopefuls into the Octagon looking to earn a victory and impress UFC President Dana White and matchmakers Sean Shelby and Mick Maynard enough to follow Dustin Jacoby, Uros Medic, and Jordan Leavitt in turning a Contender Series showcase into a chance to compete on the UFC stage.

Dana had plenty to consider on Tuesday night as three bouts ended in five minutes or less and the two bouts that went the distance featured competitors who have the potential to be fixtures in the UFC down the line.

After talking it over with the matchmakers and consulting his notes, the UFC President passed out contracts to all five winners, including announcing that Impa Kasanganay will make his promotional debut on the August 22nd card in Las Vegas.

Dustin Stoltzfus, Adrian Yanez, Cory McKenna and TJ Laramie will join Kasanganay in graduating to the UFC, and while they don’t have fights booked yet, they will.

A pair of fighters returning to the Contender Series kicked off the second week of Season 4 as Anthony Adams looked to rebound from his Season 2 loss, while Impa Kasanganay aimed for a second straight victory inside the UFC Apex in this week’s opener.

The diversity of Adams’ striking attack was on display in the opening round as the Muay Thai stylist fired off kicks to every level, slipped in clean punches and hunted for heavy knees up the middle while Kasanganay countered with a handful of heavy low kicks of his own and a collection of heavy hooks that never quite found a home.

Kasanganay came out with a greater sense of urgency to start the second, landing with low kicks and combinations in close while Adams looked to settle in. Though the 32-year-old Adams found some success with single shots and the knee he’d been hunting in the first, Kasanganay remained the aggressor, landing far more powerful shots throughout the middle stanza and punctuating the frame with a high impact double leg takedown in the center of the Octagon with 90 seconds remaining in the round, controlling Adams and landing knees to the body through to the horn.

Early in the third, Kasanganay connected up the middle with a front kick to the face, prompting Adams to try to chase down a takedown, only to have Kasanganay reverse position along the fence and secure a takedown himself. Once they hit the canvas, the unbeaten second-year fighter went to work, driving home right hands as Adams failed to navigate his way back up and got stuck in a defensive posture.

Though Adams got back to his feet, Kasanganay quickly put his back to the fence, connecting with an elbow before an errant knee brought the round to a halt momentarily. Adams took his full allotment of time, referee Mark Smith restarted them in a neutral position, but Kasanganay went right back on the offensive, closing the distance and putting Adams back on the canvas one more time before the final horn.

When the scores were tallied, the judges awarded Kasanganay his second straight unanimous decision victory on the Contender Series.

Long considered one of the top prospects in Canada, featherweight TJ Laramie faced his most experienced opponent to date on Tuesday night as he squared off with 30-fight veteran Daniel Swain.

Laramie closed the distance early, but it was Swain who scored inside, landing a pair of powerful knees. After resetting into space, Laramie again closed the distance, catching a kick and using it to put Swain on his back. As the Canadian looked to land ground-and-pound, Swain began hunting submissions, threatening with multiple armbar setups to no avail.

Back in top position inside Swain’s guard, Laramie began to rain down strikes, working body-head while stepping over to half-guard, mixing between punches and elbows and generally staying busy as the American recaptured guard, but showed little urgency when it came to getting back to his feet.

Between rounds, Swain was complaining to his corner about a rib injury that was limiting his ability to move and breathe, leading to the bout being waved off and Laramie securing a stoppage victory.

While it was an anticlimactic ending, the effort Laramie showed in the first against the highly seasoned veteran was impressive and the way this one unfolded shouldn’t take away from his performance.

Demopoulos came out aggressively firing kicks, but McKenna was unfazed, snapping home a clean right hand and chasing Demopoulos to the canvas when she slipped. Demopoulos worked a high rubber guard, but McKenna stacked her up and smashed home an elbow, forcing the LFA champ to reset to full guard.

While McKenna worked from top position, Demopoulos continued to search for openings, climbing her rubber guard up high and threatening with an odd straight armbar from the bottom, only to have McKenna break free and finish the round landing a smattering of strikes.

Both women came out firing to start the second, with each landing a couple sharp blows in the center of the cage. Demopoulos continued to throw a number of kicks, and once again, she fell off balance, with McKenna again following her to the ground and assuming top position. The American immediately went back to rubber guard, looking to set up a triangle choke, eventually connecting the hold loosely. McKenna defended well, but Demopoulos switched to an armbar in the ongoing cat-and-mouse on the ground.

As McKenna popped free, she took the back, driving home a number of heavy rights, sinking in a hook and forcing Demopolous to defend through to the horn.

Demopolous again came out throwing, offering a cartwheel that earned a snide look from McKenna, who responded by landing a pair of high kicks of her own. After 90 seconds of striking, Demopoulos dove in for a takedown, but McKenna sniffed it out, again landing in top position and peppering the LFA titleholder with short, effective left hands.

Working in front of her corner, McKenna listened to Urijah Faber’s direction, keeping Demopoulos from hanging out in rubber guard positions and stuffing left hands in her face. With just over a minute left in the fight, Demopoulos again worked her legs high, chasing an armbar, but McKenna wisely stacked her up, avoiding the pressure and keeping the American from extending the hold.

With 25 seconds left, Demopoulos shifted her hips and appeared to have the armbar secured as she went belly-down, drawing an audible groan from McKenna, but the Welsh prospect wiggled free and closed out the round with a few more heavy punches.

Tasked with determining the victor, the judges tallied their tens and nines and awarded the win to McKenna by unanimous decision.

It was a battle of bantamweights with strong records and a smattering of experience against UFC competition in the penultimate bout of the evening as Adrain Yanez took on Brady Huang.

This one ended quickly as Yanez and Huang met in the center of the cage, happy to trade punches, with Yanez connecting with a swift left hand that sat Huang down. When he popped back to his feet, Yanez hit him with another one, prompting referee Jason Herzog to step in and halt the fight.

Official Result: Adrian Yanez def. Brady Huang by TKO (punches) at 0:39 of Round 1

Middleweights with a single professional loss each clashed in the main event as Joe Pyfer and Dustin Stoltzfus went toe-to-toe to close out the second week of Season 4.

Pyfer spent the opening minute stalking Stoltzfus, attacking with low kicks and sharp right hands, but Stoltzfus was poised, countering with calf kicks of his own. The size and power difference between these two was clear, as Pyfer looked a weight class bigger than Stoltzfus, but that only made the cat-and-mouse between the two more intriguing.

Midway through the round, Pyfer ran through a takedown, landing in Stoltzfus’ guard and scoring with a handful of strikes while being careful to avoid any submissions attempts.

As Stoltzfus attacked a leg lock, Pyfer pulled free, leading to a scramble where Stoltzfus scooped Pyfer into the air when disaster struck. Stoltzfus went to drive Pyfer into the canvas and when he posted to break his fall, Pyfer’s elbow dislocated, bringing the fight to an immediate halt.

This was a tough way for this one to end as it was shaping up to be an entertaining back-and-forth battle.

Official Result: Dustin Stoltzfus def. Joe Pyfer by TKO (Injury) at 4:21 of Round 1