Six weeks after Jordan Williams wrapped up Episode 7 of the fourth season on Dana White’s Contender Series with a first-round stoppage win that finally earned him a UFC contract, the festivities resumed this evening in Las Vegas as another collection of hopefuls crossed the threshold into the Octagon in hopes of joining Williams and the 25 other athletes who have gotten the call to join the UFC roster already this season.

Initially slated to be a full complement of five fights, this week’s return is down to four with the news on Monday that the strawweight bout between Pauline Macias and Gloria de Paula had to be rescheduled.

Despite being down a bout, this evening’s matchups remained an intriguing collection of hopefuls spread across four divisions and, as always on the Contender Series, the action was electric.

Dana White didn’t have much to mull over on Wednesday night, as all four fights ended inside the distance, each one drawing a reaction from the UFC President in the moment and each victor securing a contract.

Jared Vanderaa joins the heavyweight ranks, Luis Saldana jumps into the talent-rich featherweight waters, Ignacio Bahamondes matriculates to the welterweight division, and Carlos Ulberg claims a place in the light heavyweight division, bringing the total number of contracts handed out this season to an even 30. 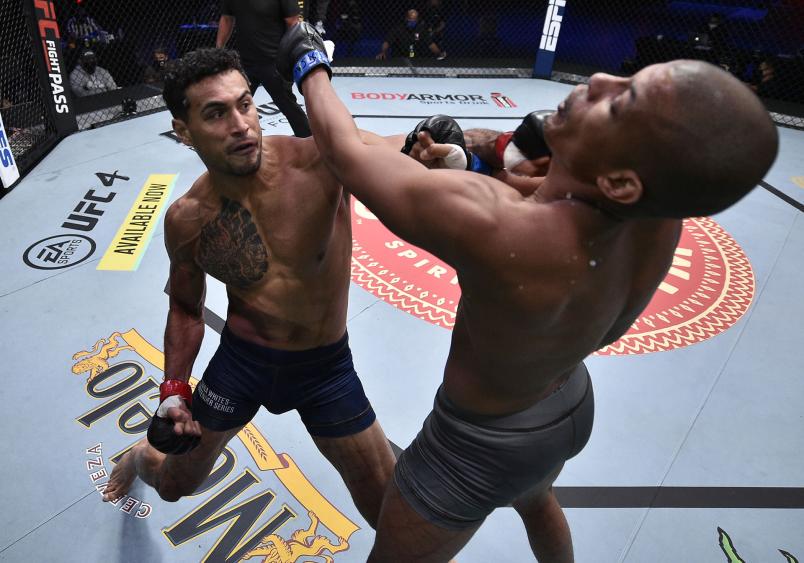 Light heavyweights manned the main event slate on this special Wednesday night edition of the Contender Series, as Carlos Ulberg looked to become the latest member of the City Kickboxing crew to join the UFC roster as he squared off against American Top Team’s Bruno Oliveira.

Oliveira raced across the cage quickly to start the fight, looking to crowd the kickboxer Ulberg, who looked for opportunities to connect while happily circling on the outside. The duo traded kicks at range, neither finding a home for their punches, but as Oliveira pressed forward, Ulberg cracked him with a counter left that straightened him up. A second left hook and a right behind it sent the Brazilian falling to the canvas and there was no need for Ulberg to follow-up as the result was clear.

Official Result: Carlos Ulberg def. Bruno Oliveira by KO (punches) at 2:02 of Round 1 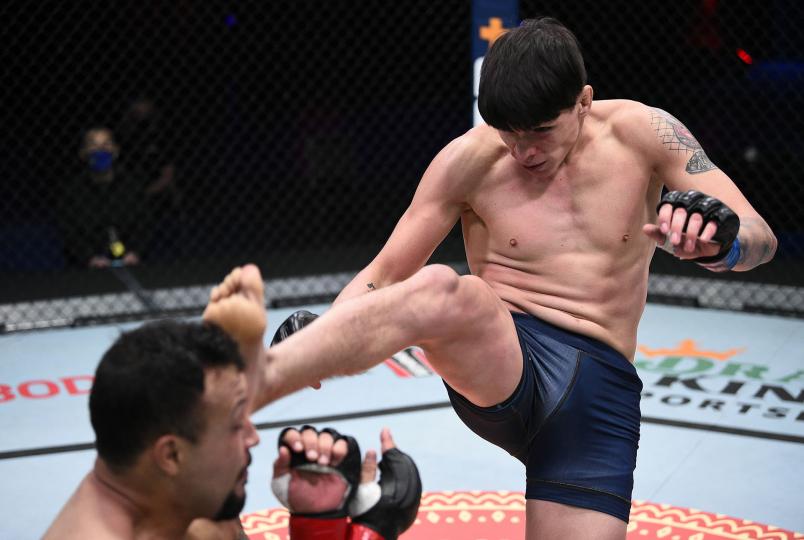 Welterweights still in the formative stages of their careers clashed in the penultimate pairing of the evening as King of the Cage standout Edson Gomez locked up with Valle Flow Striking representative Ignacio Bahamondes.

Bahamondes began the fight working from range, sniping at Gomez with long punches and kicks before the California-based King of the Cage champ found a little success by closing the distance and letting his hands go. Bahamondes denied Gomez’s first takedown attempt and returned to working from space, taking out his legs with a low kick midway through the opening round.

Bahamondes’ understanding of range was evident throughout, as he cracked Gomez with long, quality punches, stinging him on several occasions, though Gomez was undeterred. He again closed the distance and tried to take the fight to the canvas, but Bahamondes was able to defend and circle out, finishing the round by landing a spinning back kick to the midsection.

It was more of the same to start the second, with Bahamondes landing multiple quality shots from range, forcing Gomez to cover up. When he did return fire, it was single shots from the 29-year-old Gomez, who missed weight on Monday and was clearly fading by the midway point of the middle round.

With Bahamondes backing Gomez up at the halfway point of the fight, the promising Chilean prospect put his opponent to sleep in a hurry, channeling Anderson Silva with a front kick up the middle that sent Gomez crashing to the canvas in a heap, landing a la Mirko Cro Cop when he was “Cro Cop’ed” by Gabriel Gonzaga. 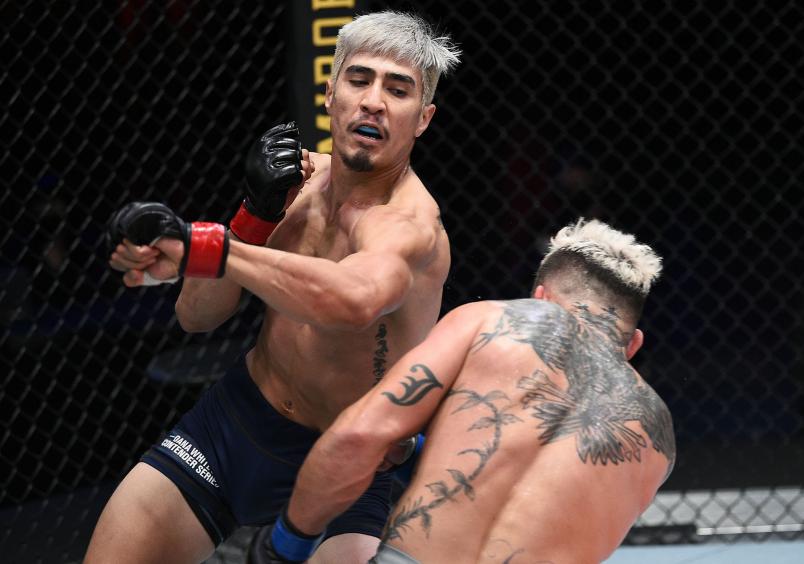 Featherweights looking to take the next step forward in their respective careers clashed in Las Vegas as Luis Saldana faced off against Vince Murdock.

Saldana put his considerable reach advantage to use right out of the chute, chopping at Murdock’s lead leg from range and sticking him with the jab while sliding away from the return fire. The output was sporadic on both sides through the first half of the opening round, with Murdock trying to find his range and find a home for heavy overhand rights, while Saldana continued to mix his strikes and pick away at range.

Saldana pressed in with a flying knee attempt with 90 seconds left in the round, but missed, allowing Murdock to secure the clinch for the first time, only to have Saldana break free with ease. Late in the frame, Saldana put together a string of strikes that found a home, connecting with a spinning back kick, multiple jabs, and a kick to the body before the horn.

Murdock took his corner’s advice to start the middle stanza, attempting to press the action and command the center, only to have Saldana back him up and continue to score from range. Each time the Team Alpha Male representative tried to close the distance, Saldana would connect with something that slowed his advance — a low kick, a jab, a sidekick to the body.

Murdock continued to struggle with pulling the trigger and getting inside as the round wore on, missing opportunities to close the distance while Saldana was off balance or along the fence. Just when he appeared ready to fire, the Fight Ready fighter would offer quickly, stifling his approach and widening his lead on the scorecards.

Saldana came out hunting to start the third, pressing forward and putting it on Murdock immediately. A series of long punches backed him into the fence, a front kick to the face forced him to cover up, and a right hand put him on the canvas, where Saldana immediately climbed into mount and pounded out the finish.

Official Result: Luis Saldana def. Vince Murdock by TKO (Punches) at 0:44 of Round 3 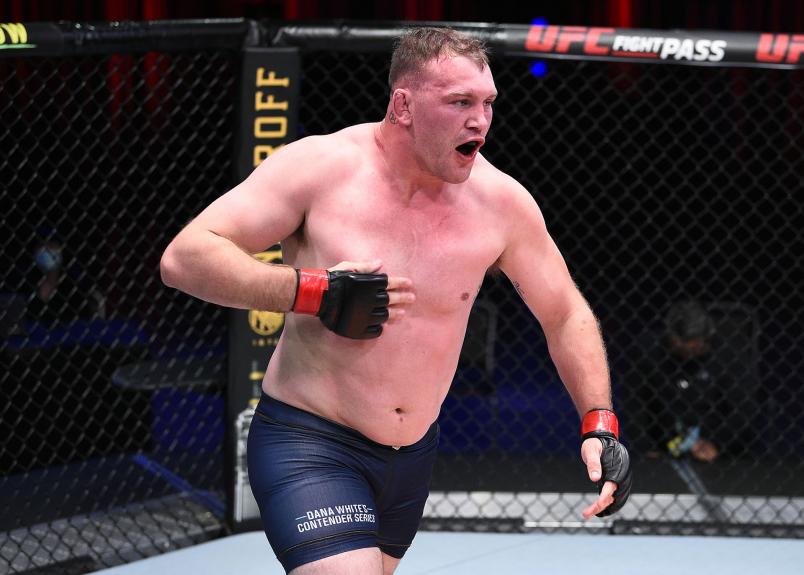 The action got underway in the heavyweight division as Jared Vanderaa and Harry Hunsucker looked to punch each other and their ticket to the Octagon in the opening bout of the evening.

Vanderaa initiated the clinch early, but Hunsucker was able to avoid getting taken down and he pressed the action off the break, rushing in with wide hooks, a couple of which found a home and made Vanderaa a little less eager to engage. Hunsucker continued to get the better of things in space during the middle portion of the first, changing in to close the distance and catch Vanderaa with quality shots, but the Team Quest representative was able to take the shots without much trouble.

Just after the midway point of the round, Vanderaa was again able to initiate the clinch, but this time, he dumped Hunsucker to the mat and that proved to be the beginning of the end. Heavy shots from top position followed, prompting Hunsucker to cover up and referee Jason Herzog to ultimately step in and call a stop to the bout.

Official Result: Jared Vanderaa def. Harry Hunsucker by TKO (Punches) at 3:34 of Round 1