Highlighting UFC’s Biggest Stars Who Made Their Initial Marks On Dana White’s Contender Series And Has Continued To Impress Throughout Their UFC Careers
By Kevin Schuster, On Twitter @KevinESchuster • Jul. 12, 2022 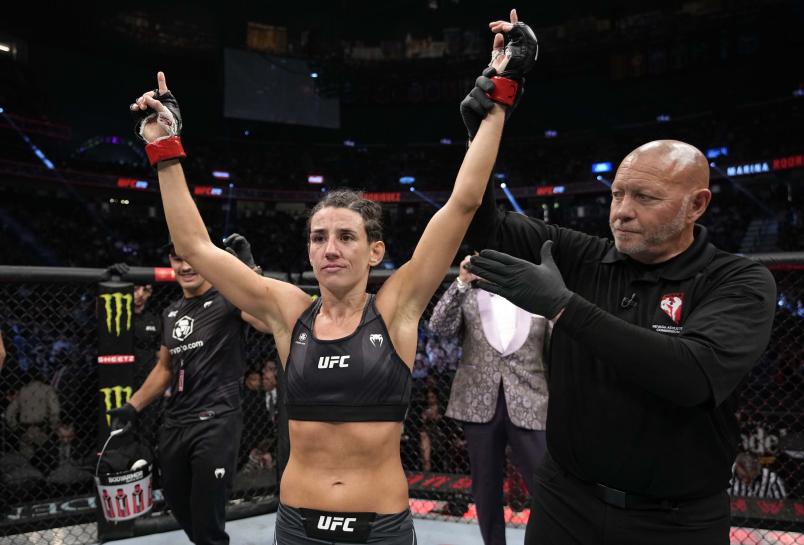 LAS VEGAS, NEVADA - MARCH 05: Marina Rodriguez of Brazil reacts after her victory over Yan Xiaonan of China in their strawweight fight during the UFC 272 event on March 05, 2022 in Las Vegas, Nevada. (Photo by Jeff Bottari/Zuffa LLC)

On August 11, 2018, Marina Rodriguez made a statement in her Dana White’s Contender Series Brazil bout against Maria Oliveira. Dominant on the feet and landing relentless ground-and-pound when the fight hit the mat, it only took three minutes for Rodriguez to show UFC President Dana White her exceptional striking skills.

Rodriguez had an unfortunate start to her UFC career, however, earning just two wins in her first five fights in the promotion. In that same stretch, Rodriguez fought to a majority draw against Randa Markos and Cynthia Calvillo.

Then came her hardest test to date against current strawweight champion Carla Esparza. Finding success on the feet, it was the near nine minutes of ground control time for Esparza that afforded her two of the three judges’ decisions.

Despite a rocky start, the experience Rodriguez was getting and the talent of fighters she was competing against helped her sharpen her skills before putting together a four-fight win streak against some of the division’s best.

Her only loss coming to a dominant wrestler, Rodriguez was matched up against three grapplers with 20 combined submissions to their names. Her first test was against fan-favorite Amanda Ribas at UFC 257: Poirier vs McGregor 2. 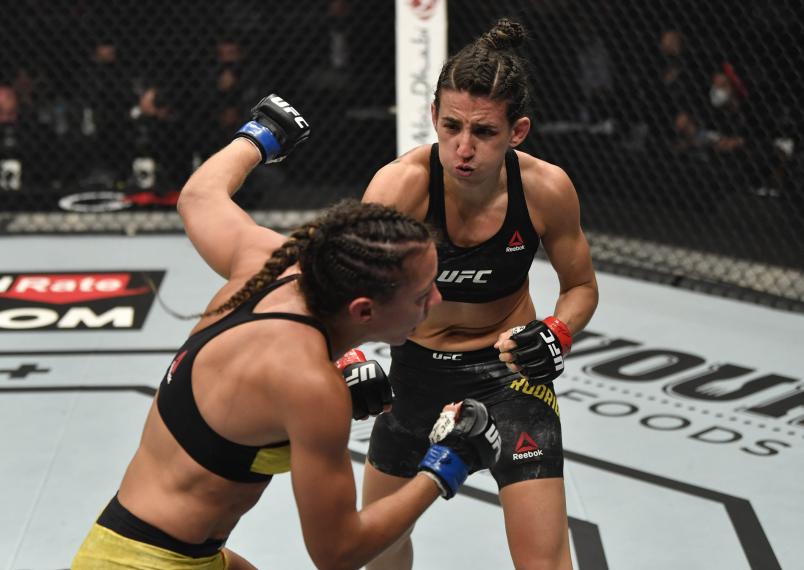 In the first round, Rodriguez was being controlled on the mat, with Ribas working in her guard for most of the round. But as is the case for all UFC fights, every round starts on the feet, and the second round gave Rodriguez another chance to keep the fight upright and showcase her striking.

And that’s exactly what she did.

Unloading a vicious right hand, Rodriguez dropped Ribas, who appeared to be almost completely out. Thinking referee Herb Dean stopped the fight, Rodriguez began walking to her corner before realizing Ribas has momentarily recovered and was back to her feet. Rodriguez immediately began throwing heavy combinations and shortly had Ribas nearly out on her feet before Herb Dean stepped in.

Her next bout wasn’t any easier, this time facing plenty of pre-fight challenges before ever stepping foot in the Octagon. Challenging Michelle Waterson, both fighters agreed to fight at flyweight due to the timing of the bout being rescheduled and weight cutting implications.

Rodriguez also spent 20 hours traveling on the Wednesday and Thursday prior to the event because of visa related restrictions getting into the U.S. during the COVID-19 pandemic.

Capping off a strenuous fight week, competing in a new weight class, Rodriguez delivered. Showcasing her well-rounded striking game that had steadily improved in both accuracy and power since her debut, Rodriguez was able to get the better of most exchanges through three rounds. But in her first UFC main event, Rodriguez had to dig deep as the fight entered the fourth and fifth rounds. 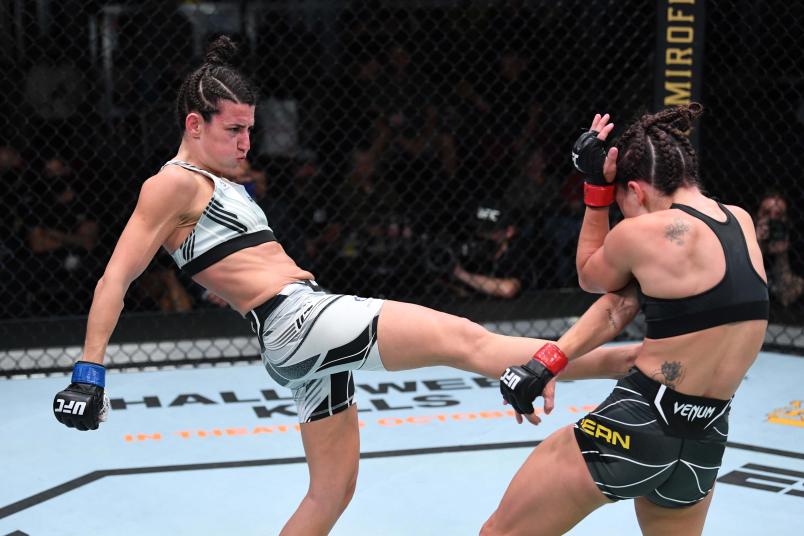 The final 10 minutes saw Waterson pick up the pace, secure a takedown and land a head kick that wobbled Rodriguez. But she weathered the storm, and made it to the scorecards, earning a unanimous decision victory.

Mackenzie Dern was her next challenge. One of the most feared grapplers in UFC, let alone the strawweight division, Dern had nothing to offer Rodriguez. Out striking Dern 144-49 in significant strikes, Rodriguez’s standup game continued to show improvement despite already having some of the best in the division.

Rodriguez’s closest win in her career so far was last time out against Yan Xiaonan at UFC 272: Covington vs Masvidal. Earning a close win that saw each fighter have plenty of moments, fans reacted unconvincingly to the decision. But in front of those who matter, the three judges scoring the fight cageside, Rodriguez did enough to extend her win streak to four and stake her claim as one of the best fighters in the division and to come out of Dana White’s Contender Series.

Currently ranked No. 3 in the division, Rodriguez is potentially only one win away from earning a rematch and shot at the title against Esparza.