"The Download" with Dana White is a UFC.com exclusive interview with the boss, covering everything that's in the news. This week Dana talks Fight Night: Silva vs. Bisping and the anticipation for a fight years in the making. 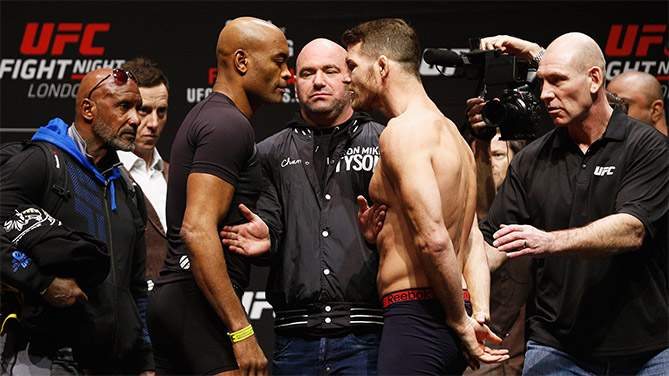 Michael Bisping has certainly done his part to get everybody excited for his long-awaited crack at the legendary Anderson Silva.

Bisping has been poking at Silva ever since the fight was announced, and he’s stepped up his game to another level this week in London.

A lot is on the line for both Bisping and Silva, who meet in the five-round main event as part of the biggest event in the history of UFC FIGHT PASS in London Saturday at 4pm/1pm ETPT.

UFC president Dana White told UFC.com that the winner of this fight will put himself in very good position in the race for the next title shot after Luke Rockhold and Chris Weidman settle their differences in what is expected to be the next middleweight title bout.

White said Bisping has impressed him in the lead up to the fight.

“Bisping looks like he’s in phenomenal shape,” White said. “Bisping’s never lost in England. The O2’s sold out, it’s gonna be f**king rocking. We haven’t been to London in a while and I’m real excited to be here.”

On the other side, Silva is on a mission to reclaim the title he held for so long. He still loves to fight and wants to do so for as long as he’s able to compete.

White was able to see Silva train in Los Angeles on a recent trip and said the former champ looked amazing.

“Anderson’s been out and he’s only fought one time the last two years,” White said. “But he’s one of the best to ever step into the Octagon. It’s going to be so fun.”

As far as the feud goes, it shouldn’t surprise anybody to see Bisping trying to get under Silva’s skin. He’s been an expert tactician in the fight game for years and the added bonus of wanting this fight for a long time likely adds fuel to his fire.

“They’ve always wanted to fight each other. Bisping has wanted this fight forever,” White said.