Dana White: Nobody in the game is like Conor McGregor

"The Download" with Dana White is a UFC.com exclusive interview with the boss, covering everything that's in the news. This week Dana talks UFC 196 and about the main event between Conor McGregor-Nate Diaz and Holly Holm vs. Miesha Tate. 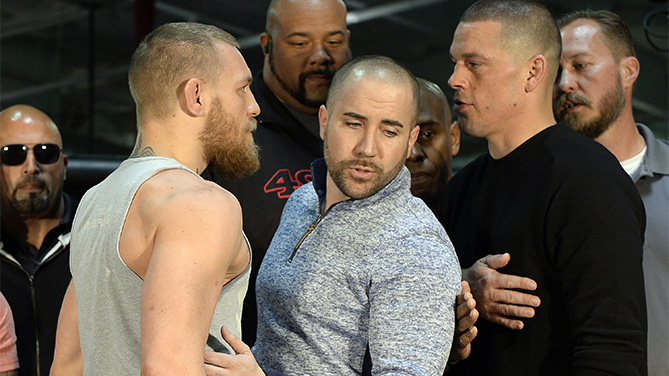 UFC president Dana White remembers sitting at dinner for the first time with Conor McGregor, thinking to himself that if the Irishman could fight as well as he could talk he would be a superstar.

White was absolutely right. That’s because McGregor, who takes on Nate Diaz in the main event of UFC 196 live on Pay-Per-View from the MGM Grand Garden Arena in Las Vegas, makes the fight game fun because he does his talking inside and outside the Octagon, White said.

“A lot of guys turn f**king goofy as soon as they get big,” White told UFC.com. “They start saying, “I don’t know about this fight or that fight.” Conor doesn’t turn down f**king anybody.”

Not even Diaz, at 170 pounds on 10 days’ notice. As White said, McGregor will fight any man at any time.

“I called that kid and told him that Dos Anjos broke his foot and Conor was like, ‘I’m going to the f**king gym, call me tomorrow when you know who I’m fighting. I don’t give a sh*t, I’ll fight any of them.’” White said. “Nobody f**king does that. I don’t care who you are, how good you are, what f**king belt you’ve held in the UFC – nobody does that. And that shit is fun.”

UFC 196 marks the fourth time in eight UFC fights that McGregor has embraced a late opponent change. This time, it’s Diaz who steps in, just over a year removed from being an afterthought in the UFC following a lengthy holdout.

But since Diaz re-focused his efforts and dedicated himself once again to training, he’s looked like the best version of Nate Diaz that there’s ever been. White said that what makes the Diaz brothers so special is they command respect and people love them both of them.

“The thing is, at the end of the day we’re in the business of making fights that people want to see. And timing is everything in this business,” White said. “When opportunity knocks in this business, you better jump on it. The timing and everything was there for Nate. Plus people are mesmerized by the Diaz brothers.”

Holm became a star and turned the MMA world on its head.

“The Ronda fight was shocking to everybody; the unbeatable being beaten is always such a huge shock,” White said. “The world and the Internet went crazy that night. The thing is though, styles make fights. And stylistically this is a really tough fight.” 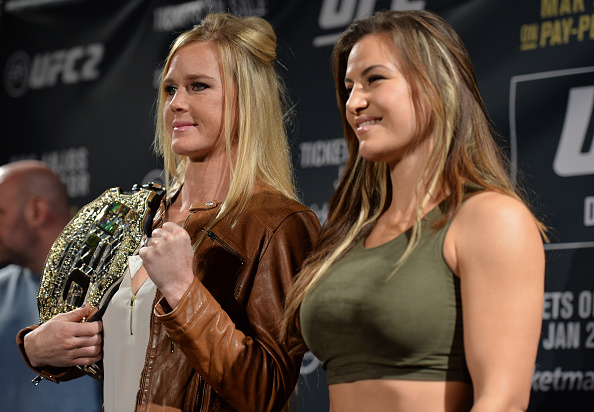 White is referring to Holm’s first title defense against veteran Miesha Tate in the co-main event. Tate has seen everything inside the Octagon over the course of her career and she knows what she’s good at.

Tate won’t rush Holm like Rousey did, and with a smart game plan “Cupcake” has a shot to pull the upset.

“There was a guaranteed rematch with Ronda, but Holly wanted this Miesha fight, so here we go,” White said. “So it’s one of those ‘Be careful what you wish for’ (scenarios) because Miesha Tate is a very tough fight.”

This will be Tate’s second UFC title shot, and an opportunity White said she must take advantage of.

“A loss on Saturday will definitely – if Miesha should lose I’m sure it’s definitely going to have her questioning what’s next,” White said.