Dana White: McGregor will return to 145; Woodley to face Wonderboy 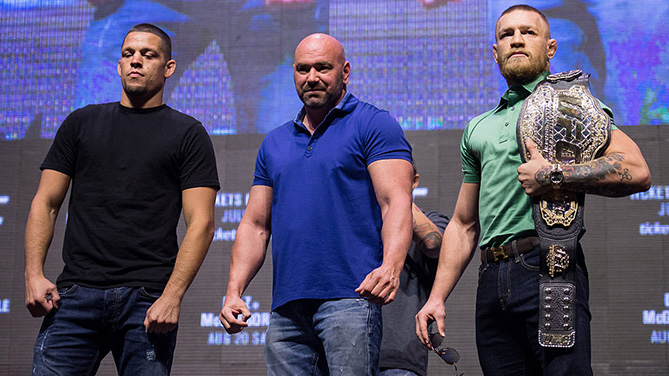 “I fully expect Conor to come back and defend his 145-pound title,” White told UFC.com in an exclusive interview. “I think that Nate feels his brother should have the fight at 170, but Nick is not going to come back and fight for the title right away.

“There are other guys deserving of a title shot. Stephen ‘Wonderboy’ Thompson is going to fight for the 170-pound title and then we’ll see what happens with Nick and Nate.”

The polarizing McGregor has cast his shadow over three separate divisions, living up to the name “Mystic Mac” in his steady proclamation that he’s taken over the entire fight game.

McGregor and Diaz meet again at 170 pounds at UFC 202 on Aug. 20 in the biggest rematch in company history, a sequel to their Fight of the Year contender last March before returning to their lighter domains.

UFC lightweight champion Eddie Alvarez isn’t shy about who he wants next following his championship victory in July over Rafael Dos Anjos. Alvarez embarked on a Philadelphia victory press tour this week and said he wants the winner of McGregor-Diaz next at 155.

“I know Nate Diaz is fighting Conor McGregor and I would like to try and get the winner of that fight,” Alvarez said on CSN Philly’s Breakfast on Broad morning show on Wednesday. “Hopefully somebody comes out on top there and they sign on the dotted line.”

But McGregor is going to be busy with interim featherweight champion Jose Aldo, and Diaz is ranked No. 4 in the lightweight division, potentially one more win within his division away from the title shot.

Here’s what we know: Diaz-McGregor 2 is trending to be the biggest fight in UFC history and White expects it to be just as good, if not better, than the first fight.

“If you look at how big Manny Pacquiao-Floyd Mayweather was and how big Diaz-McGregor 1 was – Diaz-McGregor delivered,” White said. “That fight delivered on all the hype and all the excitement and energy, and this one will, too.”

Boxing fans waited more than half a decade for the biggest boxing matchup of all time and by most accounts it was a flop.

McGregor destroyed Diaz in the first round at UFC 196, and Diaz took every punch and came back swinging in the second. It was a fight that lived up to its billing and more. Round 2 is virtually a slam dunk to be another memorable throwdown.

“Just stylistically and the way these guys fight, it’s impossible for Diaz-McGregor not to be a ridiculous fight,” White said. “If you look at the first fight, Conor was absolutely just dominating and then gassed out. Diaz took every ounce of punishment and then as soon as he saw Conor started to slow down and was tired, he jumped right on him. It’s everything you love as a fight fan.”