"The Download" with Dana White is a UFC.com exclusive interview with the boss, covering everything that's in the news. This week Dana talks about Sage Northcutt, Randy Brown, and his new show "Lookin' for a Fight." 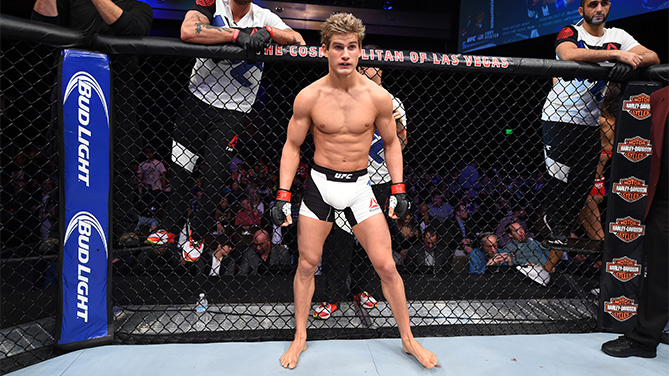 Burgeoning UFC superstar Sage Northcutt is up again at Fight Night Newark, ready to compete in his third fight in less than four months

“Super” Sage, known for his athleticism and freakish athletic ability (check out the insane flip skills), wants to be active as he continues to develop as a professional martial artist.

UFC president Dana White, who discovered Northcutt on his show “Lookin’ For a Fight,” said that the 19-year-old’s attitude is what he likes the most.

“Sage is a beast and he wants to fight like every other month,” White told UFC.com. “I love kids like that - who are hungry and fired up and love to be active.”

Northcutt is always smiling and has become known for his positive attitude inside and out of the Octagon. Some have questioned Northcutt’s persona and whether he’ll be able to maintain the star power he’s showcased early on in his run.

White isn’t too concerned. In fact, the boss said that Northcutt’s personality is unique and that is what makes the star.

Speaking of “Lookin’ For a Fight,” the newest episode hit UFC.com recently and it features Randy Brown.

White found Brown in Atlantic City, and the undefeated Queens, NY welterweight put on a show, finishing one of Matt Serra’s fighters by TKO.

Brown makes his UFC debut in Newark in the main event of the UFC FIGHT PASS prelims, where Northcutt first fought in the UFC. White is excited about what Brown brings to the table.

“He’s really tall for the weight class and he’s a killer,” White said. “This guy goes for finishes. Him and Serra’s guy that night fought their asses off, and Brown ended up finishing him. So I think the guy’s got potential. I like his attitude, his style of fighting, and I’m excited to see how he does in his first UFC fight.”

“Lookin’ For A Fight” has taken off as the newest UFC reality show. It features White, Serra and Nick “The Tooth” – a longtime friend of White’s.

It’s main purpose is to help White find new and exciting fighters for the UFC, but there are plenty of laughs along the way, as the three friends travel from city to city, eating food and going to fights.

White said it’s been hard work but a fun project.

“It’s been fun,” White said. “It’s a really hard show to film because we start at 7 in the morning and go until midnight. And then if we’re doing another city we jump on the plane, sleep on the plane, and then we land and film again going 7 to midnight. So it’s been a lot of fun, though.”

Matt Parrino is a digital producer and writer for UFC.com. Find him on Twitter at @MattParrinoUFC