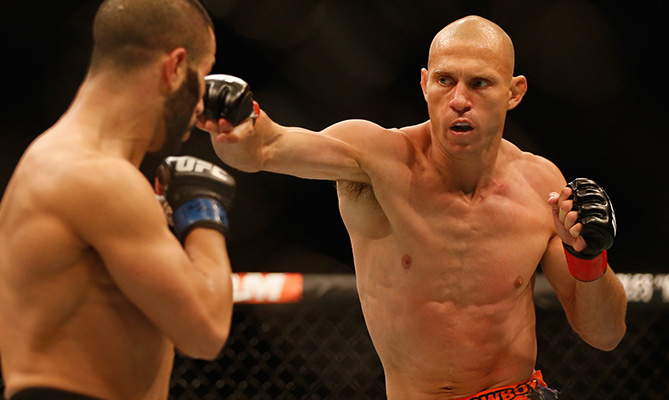 “Cowboy” Cerrone is a lot of things, but maybe most of all he is reliable.

When his fight with Tim Means was cancelled, it was basically a guarantee Cerrone would be game for whoever was up next.

UFC president Dana White said that when guys like Cerrone are involved – true fighters – fans usually end up with a matchup that is at just as engaging.

“It’s funny because sometimes when a fight falls off it sucks. But there has been so many times where we’ve actually been able to make a better fight. This is one of those times,” White said.

Oliveira has been doing his best Cerrone impression at 155 pounds. Riding a three-fight win streak, the Brazilian cowboy is finishing fights much like Cerrone, who held an eight-fight win streak recently which included five finishes.

But 155 pounds seems to be in the past for both fighters. They meet at 170 in Pittsburgh live and free on FS1 Sunday night.

White said that Cerrone was an animal at 155, and thinks he could be even better without the rigors of a hard weight cut.

“Look at Conor McGregor’s situation – he would drain himself so much to make 145 that maybe he’s better at 155. And that’s scary, if Conor’s better at 155,” White said. “Cowboy Cerrone goes out there to entertain and put on amazing fights.”

White is amped up for the main event, but another fighter on the card has his full attention.
Team Alpha Male’s Cody Garbrandt makes his third UFC appearance at Fight Night Pittsburgh, and White said he loves everything about the way Garbrandt fights inside the Octagon.

“I love Cody. I love everything about him. I love the way he fights; I love his attitude, his personality – just everything,” White said.

Fight Night Pittsburgh kicks off on UFC FIGHT PASS Sunday night at 5:30 pm ET/2:30 pm PT before moving to FS1 at 7 pm ET for the duration of the card.