"The Download" with Dana White is a UFC.com exclusive interview with the boss, covering everything that's in the news. But this week Dana spoke to Matt Serra and Jim Norton on the UFC Unfiltered podcast about Brock Lesnar. Here's a recap. 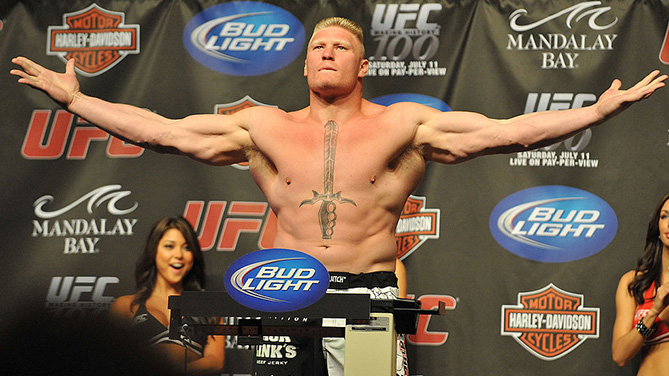 The return of Brock Lesnar shocked the MMA world when it was announced at UFC 199.

Lesnar, the iconic former UFC heavyweight champion and NCAA wrestling national champion, is one of the most decorated UFC champions in history. His rise to the top of the sport happened in the most dangerous and popular division in the sport.

UFC president Dana White got a call from Lesnar earlier this year and “The Beast” was considering a comeback. As White told Jim Norton and Matt Serra in the first episode of the UFC Unfiltered podcast, Lesnar is simply one of those guys with a serious competitive fire burning inside.

“He was a wrestler and a lot of wrestlers migrate to the UFC and he loves it,” White said. “He’s so pumped to be back here and he’s so happy that Vince (McMahon) and the WWE let him do this. He’s fired up and really excited for this fight. He just has that competitive spirit in him.”

Lesnar has been a busy man since leaving the UFC back in 2011, leading the way for the WWE as one of its most popular names.

But the UFC Lesnar is returning to isn’t quite the same animal he walked away from four years ago. It’s deeper and arguably more talented, with more sophisticated training methods and performance coaching. He takes on No. 8-ranked heavyweight Mark Hunt in the co-main event of UFC 200.

“The Super Samoan” is one of the most feared strikers on the planet and he presents one of the toughest challenges Lesnar could find inside the Octagon.

“(Hunt’s) takedown defense is a lot better these days. He’s a lot tougher to take down than he used to be,” White said. “If Brock doesn’t get this thing to the ground he’s in for a bad night.

“Mark Hunt knocks guys out that have never been knocked out. He goes in there and knocks out Roy Nelson with one of those one-shot, walk-away punches. Nobody does that to Roy Nelson.”

But Lesnar has been defying naysayers ever since he decided to compete in MMA. Not many people would have predicted he’d become champion and defend his title.

And now Lesnar finds himself as the underdog once again (+150) against Hunt.

White is expecting an amazing fight and thinks the always-evolving Hunt is the perfect foe for Lesnar in his return.

“Mark Hunt has fought guys who are phenomenal wrestlers, great grapplers, and when he stops that shot I think it makes these guys go, ‘Oh sh*t. I’m in big trouble now,’” White said.

Make sure to visit UFC.com every Tuesday and Thursday to listen to the latest new episode of UFC Unfiltered with Matt Serra and Jim Norton. Listen to episode #3 with Daniel Cormier and Mike Judge now on iTunes and Google Play.