"The Download" with Dana White is a UFC.com exclusive interview with the boss, covering everything that's in the news. This week Dana talks about the main event of Fight Night Boston on Jan. 17 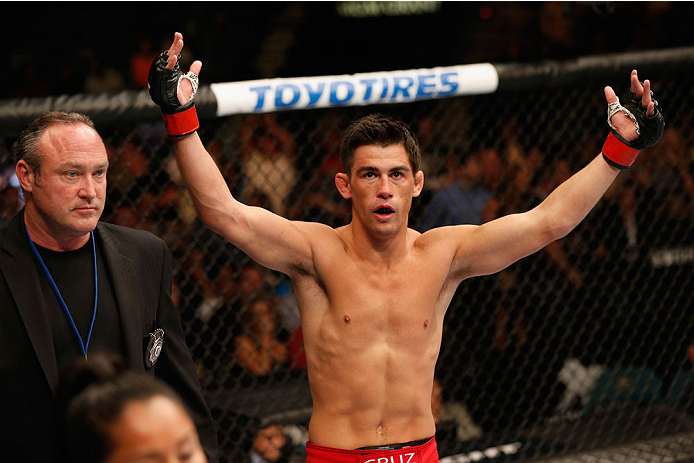 It may be more than two months away and there may be six scheduled title fights between now and Jan. 17, but Fight Night Boston is headlined by one of the most intriguing championship bouts in recent memory.

UFC bantamweight champion TJ Dillashaw takes on former title holder Dominick Cruz in a fight that has been gaining steam ever since Dillashaw shocked the world at UFC 173, finishing former champion Renan Barao in dominant fashion.

If you don’t remember Dominick Cruz, here is a quick crash course:

Cruz has a 20-1 career record with four UFC/WEC bantamweight title defenses. He is one of only two fighters to beat current UFC flyweight champion and No. 2-ranked pound-for-pound fighter in the world, Demetrious Johnson. He has never lost at bantamweight, putting together a 10-0 career mark capped by his most recent win, which came over Takeya Mizugaki in jaw-dropping fashion.

UFC president Dana White thinks this fight matches two guys who have dominated their era in the bantamweight division.

“It’s a great fight because Dominick looked so damn good in his last fight it was unbelievable,” White said. “This is actually a really good fight.”

Cruz and Dillashaw’s former teammate Urijah Faber have a storied rivalry going back several years. The two coached against each other during Season 15 of The Ultimate Fighter.

So Dillashaw’s ties made his upcoming bout with Cruz extra intense. But the Sacramento-based champion recently left Team Alpha Male to train with Team Elevation in Colorado.

Dillashaw has received some blowback from his decision, specifically from Faber and other members of Team Alpha Male. But White thinks that every fighter has the right to make the best decision for the good of his or her career.

“I think that TJ made a move that he felt was right for him and you can’t fault a guy for that,” White said.

As far as Cruz-Dillashaw goes, White is counting the seconds until this awesome title fight.

“If Dominick had been here the whole time he probably would have been the champ. And now TJ has come in and TJ looks real good,” White said. “This is going to be an unbelievable title fight.”