Dana Is Back; Weighs in on Jones-Cormier-Gus

"The Download" with Dana White is a weekly UFC.com exclusive interview with the boss, providing fans with a look inside the UFC universe with the man himself. This week Dana talks about Jon Jones, Daniel Cormier, Alexander Gustafsson and more. Make sure to respond in the comment section below with your thoughts! 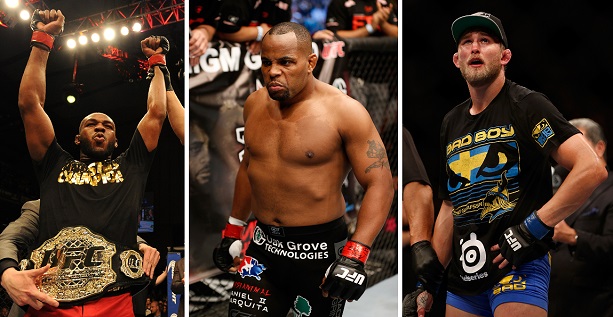 The moment Alexander Gustafsson heard the news that Jon Jones vs. Daniel Cormier was off after Jones suffered a leg injury, the former light heavyweight No. 1 contender took immediately to social media to express his interest in fighting Jones.

"I just heard the news that Jones is injured and the fight is rescheduled to January 3," Gustafsson wrote on Facebook. "Until then, I will be more than ready, it was MY fight to begin with and I WANT the fight as the number 1 contender. End of story!"

The disappointed Swede tried to make a case for why he should get to step back into the top spot behind Jones, but UFC CEO Lorenzo Fertitta quickly guaranteed Cormier the shot he had been given when Gustafsson, who was originally set to face Jones at UFC 178, suffered an injury of his own.

UFC President Dana White sat down with UFC.com in his exclusive weekly interview to discuss the light heavyweight title picture.

"Gustafsson is upset, but it's not like we took Gustafsson out of the fight. Gustafsson got hurt and he's out," White said. "Cormier stepped in and accepted the fight and this is the fight that is going to happen now."

The feud between Jones and Cormier has only intensified since the two brawled on stage at a UFC 178 Media Day event in the lobby of the MGM Grand on Aug. 4. But White said the interest in the Jones-Cormier fight has nothing to do with the decision to keep that matchup for UFC 182.

"The reality is we had Gustafsson versus Jones, he was the number one contender, that was the fight. He got hurt," White said. "He fell out of the fight. Well, people can say, 'Now Jones is hurt.' Well yeah, but this is the fight that's happening now."

Gustafsson's manager Manos Terzitane appeared on "UFC Tonight” on FOX Sports 1 and said that "The Mauler" will not accept any other fight than to be the next in line for the title against Jones.

White said he may have other plans for Gustafsson.

Next up for Gustafsson could be the dangerous rising 205-pound star Anthony "Rumble" Johnson. White confirmed that Gustafsson vs. Johnson would probably be the fight that would make the most sense.

White's first comments on "The Brawl"…

If you've been wondering where White has been the past few weeks as chaos ensued during the UFC 178 media tour, you're not alone.

Many fans have reached out to White on social media to ask him why he has yet to comment on the brawl between Jones and Cormier, unaware that he just returned from an extended vacation in Bora Bora on Wednesday.

As usual, White had quite a bit to say about what unfolded last week.

White said the altercation is neither good nor bad for the sport - it's just what happened. The UFC president has been front and center for thousands of stare downs over the years, and he's become an expert on what to expect and how to handle things when the fighters get really amped up.

"[UFC Sr. Director of Public Relations] Dave Sholler doesn't really have any experience out there between the guys," White said. "There's times when you know something is going on and you're ready and you jump in there and get that thing defused. That's why I stand there. I don't stand there because I want to be in f**king pictures, I'm there to make sure that kind of sh*t doesn't happen. You got two guys, who are going to fight, and there is definitely a ton of mind warfare going on between [Cormier and Jones], no doubt about it."

Two of White's favorites parts of MMA and boxing are the weigh-ins and the fights themselves.

"When those guys get up there and you have the mentality of a fighter, and not everybody is the same," White said. "There are some guys who can go up there and can stare at each other and it's all good, and then there are guys where there can be any little thing that can be off, or something that was said leading up to them being face to face, and anything can happen. These guys are fighters, man, they're ready to go. And that's what makes the weigh-ins so amazing and why I love it so much. Those staredowns, there's nothing f**king like it."

> Watch: Cormier and Jones talk about the brawl

The spot in between the fighters is the best position in sports, White said.

"The position that I get to stand in during those staredowns is the greatest position in all of f**king sports," White said. "Nothing like being there when two guys are cutting weight, they're fighting the next day, they're away from their families for eight f**king weeks, and they get to square off."

At the end of the day, the two men or women in the staredown are fighters. It's what they do, and White said that it's only natural that things get aggressive at times.

"One little thing can trigger two guys, who are the baddest dudes on the planet, who are face to face," White said of Jones and Cormier. "That's what they do, period. People can try to sugar coat it or try to spin any way that they want, that's the reality. That's who they are, that's what they're paid to do and that's what you show up to watch. These guys, that's who they are to the core. And when you get two guys like that and you don't handle the situation the right way to defuse it, that's what happens. The difference is that Sholler has never been in that position before.”

"It's an important fight for that division. Saint Preux is ranked number 10 in the world and Bader is number eight," White said. "Bader is a guy that started to work his way up the ladder and right when he got to the top he had a couple of mishaps. This is a very important fight for him. If he loses to Saint Preux, who knows, he could drop out of the top 10. This fight means everything to Bader.

"For Saint Preux, if you come in and beat Bader, now you're looking down the pike at Dan Henderson, Phil Davis, Anthony Johnson, Glover Teixeira. You're looking at the top six, seven guys in the world, and you're on your way. It's a big fight."

"All he has to do is keep knocking people out, man. He doesn't need to be outspoken. He's been an absolute professional since he's been back," White said. "He's a completely different person, and it's just so amazing to see a guy who used to fight at welterweight move up to 205 and knock out the best 205-pounders in the world."