“It’s all business in there for me no matter who I fight. I never have to hate my opponent and I’m never looking to go in and hurt anybody." - Dan Miller 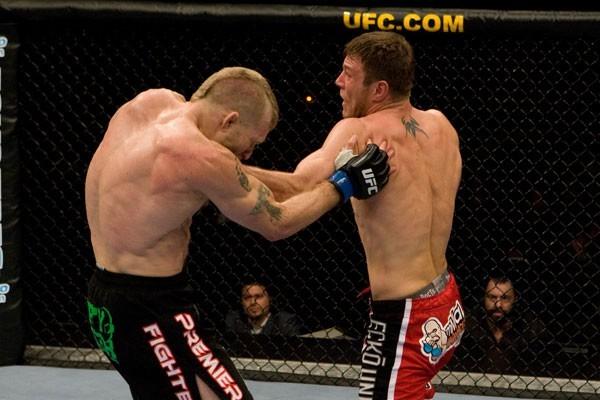 Editor's Note - after press time, it was revealed that Dan Miller will now be replacing Yoshihiro Akiyama in a UFC 128 main card bout against Nate Marquardt.

Middleweight Dan Miller (13-4, 1 NC) is used to punching his friends in the face. He trains daily with his younger brother, lightweight contender Jim Miller, and while most big brothers beat up their siblings just for the fun of it, for Dan, it’s his job.

That’s why when he steps into the Octagon on March 19 at the Prudential Center in his home state of New Jersey against friend and former training partner Nick Catone (8-2), Dan won’t have any problem trying to knock his New Jersey neighbor out.

“It’s all business in there for me no matter who I fight,” says Miller. “I never have to hate my opponent and I’m never looking to go in and hurt anybody. This is a sport and I’m in it for the competition. I’ve known Nick for a long, long time, but we’re both professionals and we’ll be friends after the fight, but I’m going out to win.”

Miller is riding a two fight win streak – with his last victory coming against the always tough Canadian Joe Doerksen at UFC 124 in Montreal. The fight went the distance, and Miller took the better end of a split decision.

“I’m never happy with a decision victory,” says Miller. “That’s why I’m going to be looking to finish Catone with a submission or knockout. I always put pressure on myself to win in the most decisive way possible, and I’m not going to be happy with another judges’ decision.”

If preparing for his own fight weren’t enough to worry about, his brother Jim will be fighting on the main card against undefeated WEC import Kamal Shalorus, who is making his UFC debut.

“I’ll be cornering Jim as long as the fights stay in the order they’re in now, and it’s always nerve wracking when Jim’s on the same card as me, but we’ve done it plenty of times before and we lean on each for support,” he said. “But I think Jim feeds off of me. He works and gets amped up when I fight, so I think it’s good for Jim when he fights after me.”

But having Jim in his corner has some unforeseen advantages, like providing some much needed comic relief when Dan least expects it.

During an interview on HDNet’s “Fighting Words” a few weeks ago, Jim said that once while putting Vaseline on Dan’s face cageside before a fight, the Lionel Richie video for the 1980’s ballad “Hello” popped into his head, leading to a moment of levity that had both brothers in hysterics right before a fight.

“I was putting the Vaseline on his face and I felt like the blind chick who sculpted Lionel Richie’s face in the video,” said Jim. “So as I’m sculpting the grease on his face I start singing, ‘Hello, is it me you’re looking for,’ and we both cracked up and we were laughing our asses off.”

The two brothers have enough stories about their fighting lives to fill a book, like the time they were both about to fight in championship bouts for the local promotion Cage Fury in Atlantic City, NJ – and were working for their father’s contracting company the day before weigh-ins.

“We were closing this roof,” says Dan, “And we were both cutting weight and we were feeling really tepid, to say the least, but we had to close this roof because it was going to rain, so my father is down on the ground yelling at us to finish the job before it rained, and we were up there for like 12 hours. This is two days before championship bouts. We were NOT happy. (Laughs)”

Despite the roof, the Miller brothers both won, which is what they’re expecting come Saturday night.

“Nick’s a great fighter. He poses a lot of threats to me. I definitely have the advantage because of those fights and he’s going to be rusty,” says Miller. “He’s got a lot more credentials in wrestling than me. He’s got a big double leg takedown, so I’m going to work to avoid his shots by punching him in the face, and if he takes me down I think I have a better ground game and I’ll look for the submission. I love submitting people but I’d love to get a knockout too.”

Training at AMA under Mike Constantino, Dan has the advantage of wrestling with his brother Jim and with welterweight up and comer Charlie Brenneman, an accomplished wrestler in his own right, but being from Jersey does have its advantages in the wrestling department.

“We always have very high level wrestlers from local colleges come in to train with us so I’ve been getting a lot of good mat time in,” says Miller.

Catone has nursed a shoulder and back injury over the past year and half and hasn’t fought since taking a split decision victory against Jesse Forbes in January 2010, while at the same time, Miller has faced some of the stiffest competition in the middleweight division, in the form of Michael Bisping,  Demian Maia, John Salter and Doerksen.

Miller says he spoke with Bisping after he dropped a unanimous decision to him at UFC 114 and has no problems with The Count, but thinks he may have gone a little too far with his antics after his fight with Jorge Rivera at UFC 127.

“He’ll definitely have to pay in some form for what he did and what he said,” said Miller. “But I have no issues with Bisping. I’m good with him.”

And while both Catone and Miller being from New Jersey will nullify any home field advantage they both usually enjoy when fighting at The Rock, Miller says he’ll still feel pretty good about fighting close to home.

“There’s no traveling, no time change, I get to be home, sleep in my bed and go in and fight and it is always a little more relaxing when I fight here,” he said.

As long as little brother Jim keeps pulling out the 1980’s Lionel Richie love tunes, Dan should be pretty calm, cool and collected at fight time. Or maybe Jim will step it up with a little All Night Long.