Dan Miller: At Home at Welterweight

"There are still going to be tough fights at 170 pounds, but I'm pretty sure I can hang with every single one of them." - Dan Miller 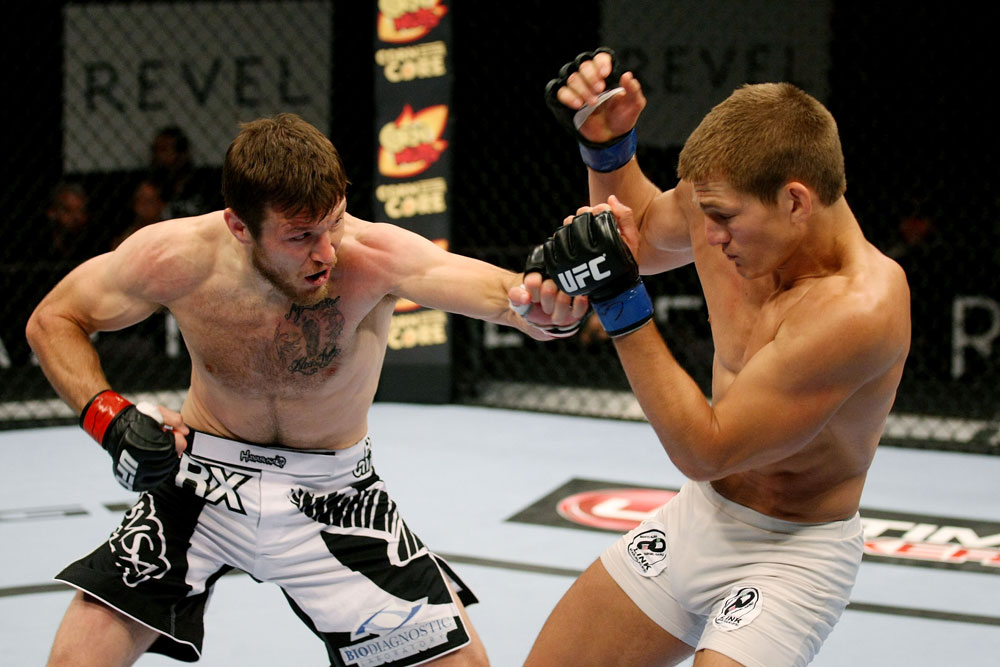 Cutting weight is never easy. Dieting down 15 pounds while training full-time as a professional fighter with one’s home gym next door to the Original Pancake House is probably Hell.

That was the calorie-pinching task set in front of Dan Miller for his welterweight debut last June. The svelte, 170-pound Miller was successful in not only making the cut, but he earned a hard fought Submission of the Night victory via third round guillotine choke. It’s a new weight class, but it’s the same granite chin and the same fight-ending chokes UFC fans have come to expect from him.

The Pine Plaza on route 10 in Whippany, New Jersey unassumingly holds two hidden gems in its strip mall: one of the best MMA gyms in AMA Fight Club and, arguably, the best bacon this writer has ever eaten at the Original Pancake House. While one is busy deliciously fattening up America, the other is creating lean and mean fighting machines like the 14-6, 1 NC Dan Miller and his younger brother, UFC lightweight Jim. After a 5-5 record as an undersized middleweight inside the Octagon, with the losses only coming by way of decision, Miller’s negative attitude about dropping divisions finally changed after being physically outmatched by the incredibly muscular Rousimar Palhares at UFC 134.

“The guy is just a beast,” remembers Miller. “It was hard for me to compete in that fight because I physically couldn't keep up with him. Mentally and far as talent goes, I think I matched him well. Physically, there was one time when I shot in to take him down and he, literally, just took me with one hand and threw me against the cage. I fell back and he just jumped on top of me and was pounding my head. It was just one of those things where I was like I either need to get a lot stronger or I need to cut. I think it was a pretty clear path that it was time for me to move. It was probably a little late. I probably should've made the move earlier in my career, but I was stubborn. I wanted to avenge those losses and I feel like I was in pretty much every single one of those fights.”

At UFC on FX in Atlantic City, there didn’t appear to be an ounce of ring rust on Miller following a 10 month layoff when battling Brazilian “Golden Boy” Ricardo Funch. “When I was walking in, it felt like it was yesterday, it felt like there was no time off,” tells Miller, who took the fight to the Team Link prospect for two full rounds before dropping Funch in the third with punches and capitalizing with a submission. The guillotine finisher has become Miller’s trademark with his nearly decapitating, highlight reel standing guillotine on Dave Phillips in the IFL as well as his lightning fast 63 second choke of Jake Rosholt and his power guillotine, aka “ninja choke,” of John Salter at UFC 118.

“If you're going to put your head there, then I'm going to try and choke you,” affirms Miller. “He kept putting his head down, so I kept reaching for it. It really wasn't until the third round because I kept trying to do a standing guillotine. I kept trying to wrap him up, and Jim actually yelled at me in between rounds to stop going for a standing guillotine and to commit to it, commit to the guillotine because I had it. A couple times, I had it under the neck and if I had committed to it earlier maybe I would have been able to finish him earlier, you never know. I had it under his chin and Jim yelled at me in between rounds and when I locked it up in the third he said, 'Commit to it!' And I did in the third. I jumped into the guillotine and I finished him.”

The 31-year-old Brazilian jiu-jitsu black belt has put his grappling skills to good use, with nine of his 14 wins via submission finish. With a background in wrestling at Sparta High School, Miller and his brother began training BJJ in June 2005 with their eyes set on fighting professionally, which they started doing six months later. Brothers who learn armbars together get black belts together, and the Millers got theirs under Jamie Cruz, who is a black belt under Renzo Gracie; specifically, Dan received his in January 2010. Recently, the Millers have continued their ground training inside the Gracie tree of black belts with Brian McLaughlin of Precision MMA, a black belt under Rob Kahn who is UFC Hall of Famer Royce Gracie’s first black belt.

“I wasn't a standout wrestler,” says Miller. “I was a good local Jersey wrestler. I was a district champ. I took second in regionals, but I never made it to states, so I was ok. I probably had better wrestling than most guys at the time when I started training, but now we have a lot of Division I wrestlers we're training with and I can't even compete with. But Jim and I from the beginning, we wanted to learn Brazilian jiu-jitsu. I didn't want to use my wrestling to beat up Brazilian jiu-jitsu guys; I wanted to be a black belt. I wanted to learn this sport. Right from the beginning, I always started on my back. In the beginning, I thought I was going to be able to knock everyone out (laughs). I was going to be a sprawl and brawl, Chuck Liddell. After training and doing it, I have a knack for grabbing a hold of somebody's neck. I have a good scramble, and I usually catch guys in a scramble. I can wrap up their neck and I'm just able to beat guys in that way.”

A win against a game opponent, a W in a new division, a SOTN bonus, and a third round stoppage (the first of his career) are all well and good, but Miller’s noticeable tears of joy in the cage weren’t entirely about his solid performance. Outside of the cage, Miller has received a lot of attention and support concerning the health issues of his son Daniel Jr. After a successful living donor kidney transplant from his Aunt Kathy in September, Miller tweeted, “Surgery went well today, never thought I’d be so happy to see some pee!” Danny is making great strides physically, urinating like a champ to his father’s delight, and is providing tons of positive motivation to his happy dad.

“He's been doing awesome,” gushes Miller. “He's been making leaps and bounds in physical strength. Just everything. Before the transplant, it was tough on him and he wasn't walking. But basically before he got sick in January he was scooting around, he had just learned that, but he kind of lost that with him having the stroke. But now, he's standing and he's this close to walking. He said 'mama' and 'dada' before, and now he's talking in sentences. Everything is just kind of exploding. I can't wait to see what the next year holds and see what he's going to be able to physically do. It's awesome.”

Up next for Miller is a Montreal melee at UFC 158 against former Strikeforce standout Jordan Mein. At only 23 years old, “Young Gun” has a tremendous amount of cagefighting experience with 34 fights and a record of 26-8. The Canadian, trained by his father Lee Mein, captured MMA fans’ attention with his vicious TKO by elbows win over Evangelista “Cyborg” Santos in the Strikeforce cage. Mein is a known for his aggression and the majority of his wins are due to KO/TKO (14).

In preparation for the bout, Miller is busy training with head coach Mike Constantino and the bevy of pro fighters at Constantino’s AMA Fight Club. Besides the previously mentioned McLaughlin, Miller has been working on his ground game with Penn State University wrestler Jared Platt, who will be making his MMA debut in April. As far as the standup game, Miller has had a slew of coaches who have helped in that area, but it wasn’t until he met John Fagan of Final Round Boxing and Fitness that Miller’s development as a striker really hit its stride.

“I want to evolve into a fantastic striker,” reveals Miller. “I want to be able to choose where I want to go. I want to be able to beat people up on their feet and when they feel threatened and they can't handle that anymore, then take it to the ground and submit them. I want to be great at every aspect. Jim and I didn't train much striking when we first started and I didn't really have a coach that I ever clicked with. I have had fantastic striking coaches, but I never really clicked with any of them. Now, I have a striking coach I click with. When John and I hit pads, we don't really have to say anything and we hit pads and we go through it. Finally, it's clicking for me. My striking is improving a lot. Not that I didn't have good coaches in the past, it was just never that connection that you need to learn it. I obviously got better before, but it was never at the speed that it needed to be.”

The final piece of the puzzle that every fighter needs is a solid chin, and Miller’s famed iron jaw is all thanks to good genetics. “Our father has probably the hardest head out of anyone and I have the exact same shaped head,” says Miller, who then provided an amusing anecdote about his dad getting walloped on the back of the skull on a construction job by two 2x6’s. “It looked like he had another head growing out of his head, but no concussion or nothing. It knocked him completely out of the forklift, onto the ground, and he got right up with this huge thing on his head and his eyes were bloodshot, but he got right up. He just has this hard head and everyone says I look exactly like him, so I kind of knew I was going to have a hard head.”

With a win over Mein, someone needs to throw Miller a pancakes and bacon after party.