Dan Ige Has A Point To Prove

Fighting On The Same Card As His Childhood Friend, Dan Ige Hopes He And Puna Soriano Steal The Show At UFC Fight Night: Strickland vs Imavov
By Zac Pacleb, on Twitter @ZacPacleb • Jan. 12, 2023

Dan Ige and Punahele Soriano have been linked since adolescence. On the hour-long bus ride to Kahuku High School on Oahu’s North Shore, the high school wrestlers talked about dreams of competing in the UFC. After a journey that included a stop in Iowa wrestling for Division-III Wartburg College and 17 fights in the Octagon between them, they are set to fight on the same card for the first time, completing a childhood goal.

“We just took that dream and put it to work and believed in it, and here we are,” Ige told UFC.com. “It's literally a dream come true for both of us.”

It’s also a huge moment for their friends and family back in Hawaii. Ige said people are “a wreck” in anticipation of their fight, and the local news publications have picked up their coverage of the event as well. In short, Ige said things back home will “be poppin’.”

A long journey led he and Soriano from the North Shore to the world’s stage. Ige was the first to make it to the Octagon back in 2018, and a couple years later, Soriano followed suit.

Training together in Las Vegas at Xtreme Couture for several years now, Ige and Soriano relished the opportunity to go through the exact same training camp schedule together. For Ige, the extra boost comes at a critical point in his career. After climbing the featherweight ladder to the tune of a six-fight winning streak from mid-2018 to mid-2020, he has fallen on hard times having lost four of his last five, including three straight decision losses.

“The main focus was just going out there and sharpening my sword and getting better, and to be in camp together with Puna, it's kind of nice because we'd feed off each other,” he said. “If maybe I didn't feel like it that day or had a little lower energy, he'd come in high energy, it would boost me up and vice versa. If he was feeling low, I would go in there (and) be like, ‘Come on, we got to get through this together.’ It was nice to have a brother that's going through this with you.”

Life hasn’t been all bad for Ige during this rough patch. His son, Bam, was born in 2021. Ige also provided perhaps the best highlight of his career against Gavin Tucker in March 2021, scoring a one-punch knockout just 22 seconds into their anticipated bout.

That punch might have set the wrong precedent for Ige, however. With hindsight, he believes his last three losses (to Chan Sung Jung, Josh Emmett and Movsar Evloev) were in part due to the fact that he sat back waiting to throw another perfect shot. As he looks ahead to UFC Fight Night: Strickland vs Imavov, where he’ll face surging veteran Damon Jackson, Ige knows he can’t just rely on finding the knockout shot.

“Because those are fight-finishing shots and people like to see knockouts and sometimes you hunt for the knockout too much, you don't get it and then you end up losing the fight because you were sitting and waiting. I can't sit and wait anymore. This is do-or-die for me, and I have to just go out there and be loose in our fight. Put a clinic on this guy.”

Ige takes care to not underestimate his opponent, which is something he believes Jackson’s previous opponents did.

Jackson, a 28-fight veteran, has made the most of his second stint in the UFC.  The Fortis MMA product rides a four-fight winning streak into his date with Ige, most recently picking up an impressive first-round knockout win over Pat Sabatini at UFC Fight Night: Sandhagen vs Song. 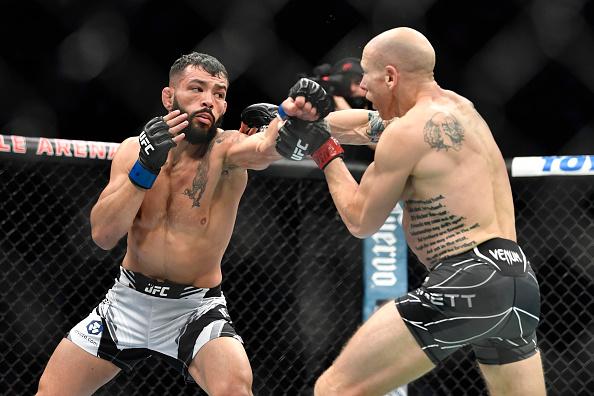 All that in mind, Ige plans to “not give him an inch” once they step across from each other in the Octagon. He’ll fight right after Soriano, but he’ll watch his childhood friend keenly while keeping his emotions in check. With his back against the wall, Ige has every intention of making a clear statement on January 14.

“I'm just trying to prove to myself that I'm still a potential threat in this division, and in this deep, deep division of sharks, that I'm still one of the main guys, and I'm still a dominant, forceful guy,” Ige said. “I'm just looking to go out there and have some fun and make a big statement, hopefully walk out with the bonus.

“I'm hoping we (he and Soriano) both steal the show, steal the bonuses, steal the media, steal the news, and walk out happy with three checks each. That’s the best-case scenario for sure.”