Dan Ige Has A 'Greedy' Mindset

Set to square off with Mirsad Bektic on the main card of UFC 247 this weekend at Houston’s Toyota Center, the talented featherweight has a plethora of options

“The hunger I have to succeed and achieve is far greater than anyone,” said Ige, who carries a four-fight winning streak into what is the first main card fight of his UFC career. “I feel like I’m fighting for respect, for freedom…”

His voice trails off. He searches for the words, but there are none that adequately explain the insatiable feeling that propels him into the cage this weekend and always.

“I just can’t wait to go out there and show it.”

The 28-year-old Hawaiian admits he steps into the cage with a sizable chip on his shoulder, but when you know the details of the road he’s taken to arrive opposite Bektic this weekend, you can understand why Ige heads into the cage feeling slighted.

He won seven of his first eight appearances, collecting six finishes along the way. One of those victories came at an event featured in Dana White’s Lookin’ for a Fight’ series, though his impressive showing didn’t garner him a call from the UFC.

Neither did his third-round submission win over Luis Gomez early in the first season of the Contender Series. Competing on the first event, where all five bouts ended inside the distance, Ige sat in the back while Karl Roberson and Geoff Neal were awarded contracts, filled with emotions.

“I showed everything possible in that fight and when I walked out of there with my hand raised, I was so emotional because in my heart, I truly felt like I was going to get picked and my dream was going to come true. To see those guys get chosen before me was devastating.”

Although he didn’t leave Las Vegas that night with a contract, he had made an impression with the UFC brass, and six months later, Ige crossed the threshold into the UFC Octagon for the first time, subbing in for Charles Rosa opposite fellow newcomer and Contender Series alum Julio Arce at UFC 220 in Boston.

After coming away from his debut on the wrong side of a unanimous decision loss, Ige turned the frustrations of not getting selected on the Contender Series and stumbling out of the gate in his first UFC bout into a catalyst for the impressive run of success he carries into this weekend’s showdown with Bektic at the home of the Houston Rockets.

“That lit a fire in me that I came out in my next fight, starched the guy in 50 seconds and was like, ‘What’s up? I’m here now,’ and that’s the way I’ve been fighting ever since,” said Ige, who made quick work of Mike Santiago at UFC 225 and hasn’t looked back, adding impressive wins over Jordan Griffin, Danny Henry, and Kevin Aguilar to his resume. “I want to show that I can be the champion and they should have picked me.”

He also wants to force people — fans, media, fellow fighters — to broaden their perspectives when it comes to recognizing talent and paying attention to fighters.

“It’s not that I feel disrespected, but that sometimes my name gets brushed under the rug,” explained Ige. “I’m going out there, I’m on a four-fight winning streak, I’m stopping guys or out-working guys, dominating guys, and I feel like I don’t have the respect that I deserve.

“I know I have to go out there and earn it — and I feel I’ve been doing so — but it’s just kind of the way I’ve formed my fighting style now: I go out there with a chip on my shoulder that I want to prove that I belong.”

Saturday’s matchup presents an interesting contrast in terms of the attention a fighter can receive as they’re climbing the ranks, as Bektic was tabbed as a future contender long before he arrived in the Octagon and held out as a potential champion after maintaining his undefeated record through his first four UFC appearances.

But the competitors Bektic beat during his initial four-fight winning streak in the UFC — Chas Skelly, Paul Redmond, Lucas Martins, and Russell Doane — were no more accomplished or acclaimed than the group Ige has beaten in advance of their showdown on Saturday; Bektic just had more buzz and an unbeaten record.

And while he’s complimentary of his opponent’s skills and knows Bektic won’t go away easily, Ige believes he’s already faced and beaten tougher competition and is bent on proving it this weekend.

“Every guy I’ve fought was a tough guy,” he said. “Their combined record is 80-21 and maybe they didn’t have the names, but these guys were legit. They were all champions in their former organizations and they never lost their belts; they were champions and they went to the UFC.

“Personally, I claim those titles — I went out there and beat those guys, so I feel like I claimed all those titles,” Ige added. “I’m a big believer that the guys I fight, I gain their experience, so I just gained 100 pro fights of experience. I’ve fought the best.

“Mirsad is definitely really good — he’s talented, he’s skilled — but he’s no Kevin Aguilar; that dude is a friggin’ monster! That dude is so tough. I hit him so hard and I know if I hit Mirsad with the same shots, he’s not going to be there.” 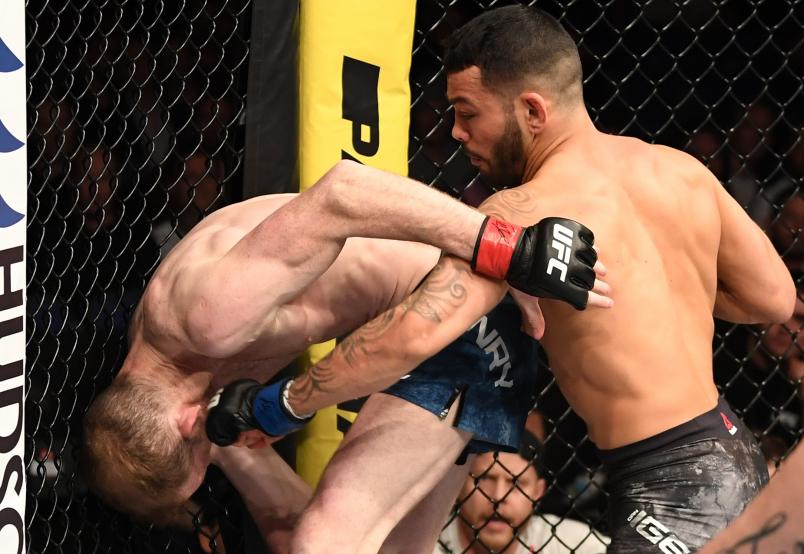 Ige’s belief that he has everything it takes to compete at the highest level and wear championship gold isn’t just the same confidence and “speak it into existence” approach every athlete who competes in the UFC takes.

That’s certainly part of it, but he also spends countless hours around some of the top fighters in the sport in his role with Dominance MMA Management, including lightweight champ Khabib Nurmagomedov and welterweight kingpin Kamaru Usman. Being surrounded by those types of athletes — working with them, training with them, seeing how they prepare and conduct themselves — has helped shape Ige’s own approach and given him a blueprint for charting his own path the top of the featherweight division.

And that’s what he hungers for the most.

“I watch how these guys prepare at the highest level — Khabib, Kamaru Usman, Henry Cejudo, Justin Gaethje, Frankie Edgar — and everyone is a little different, but they’re all human and I recognize that I can do this too,” said Ige. “I’m in the shadows, but I know I belong. I know I have that greatness in me, too. I have everything it takes to be the champ, too.

“I want it all; I want everything,” he added, acknowledging what he calls his “greedy mindset” when it comes to his career. “I want the belt. I want the glory. I want the money.

“I’m the definition of a hungry fighter and that’s the difference in this fight.”