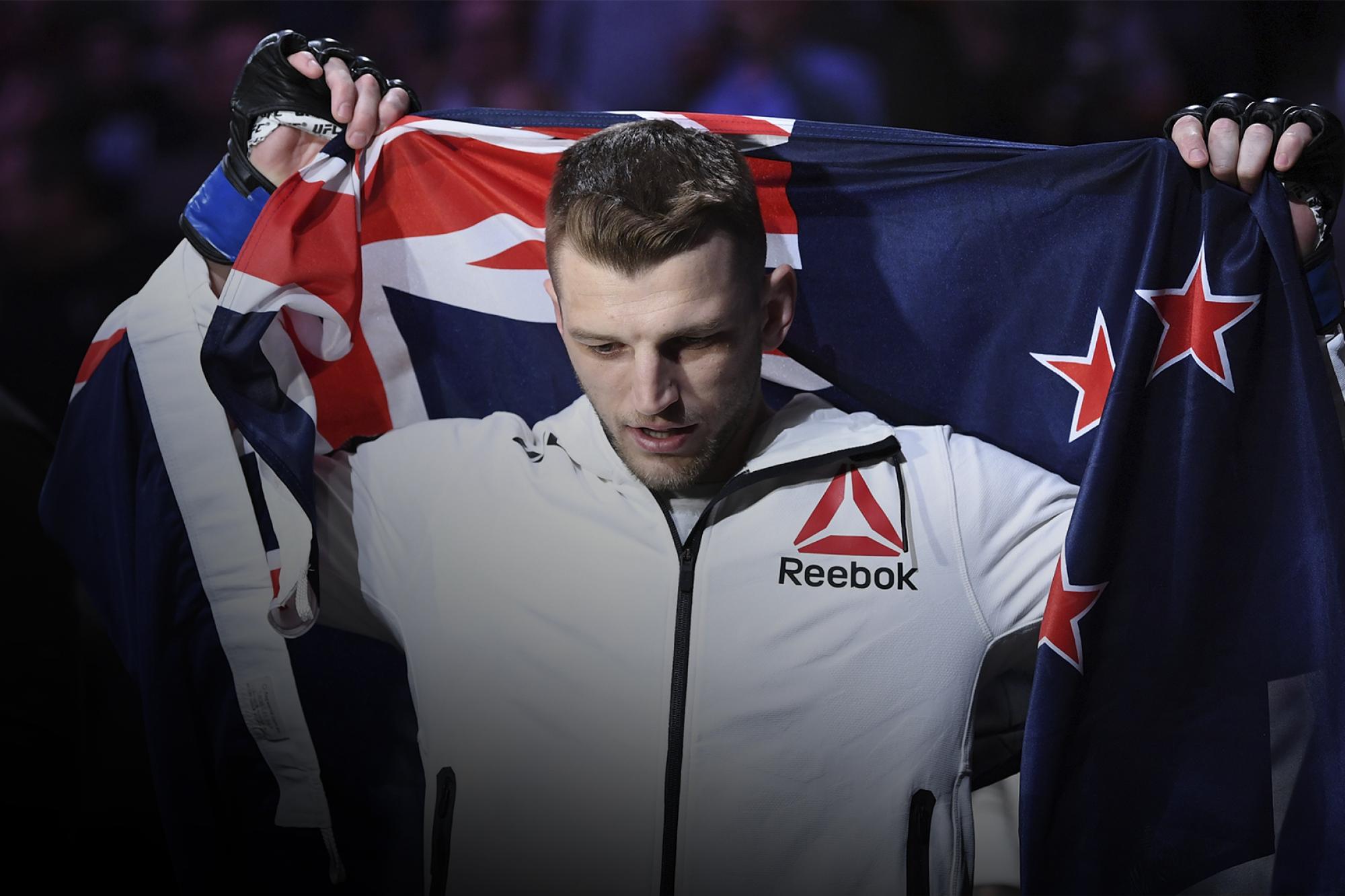 Prior to the days of text messages, SnapChat and sliding into someone’s DMs, and even before the precursors to those mechanisms like AIM and ICQ were prominent, the way you gauged another person’s interest in you romantically was actually quite simple.

On a sheet of paper — white, ruled, graph paper; doesn’t matter — and wrote something to the effect of “Do you like me?” or “Do you want to go out with me?” and you drew three boxes: one marked “Yes,” one marked “No,” and one marked “Maybe,” because letting someone hedge was better than the cold, hard slap of grade school rejection.

You would entrust a friend or maybe reach out to a member of that person’s circle, have your written inquiry delivered and then wait in agony while Karen McKinley spent the whole of lunch hour deciding which box she was going to tick.

Dan Hooker has adopted that retired grade school approach to dating and applied it to the fight game, using his post-fight interviews and occasionally social media to politely ask other lightweights if they’d like to share the Octagon with him in the not too distant future.

“If I feel like I deserve something, I’m not shy to go out there and ask,” said Hooker, who squares off with Al Iaquinta in the co-main event of UFC 243 on Saturday night at Marvel Stadium in Melbourne, Australia. “It’s a simple yes or no answer. ‘Do you want to fight?’ Tick the box ‘yes’ or tick the box ‘no’ and if you write no, I’ve got nothing bad to say about you and I’ll move on to the next guy.

“I’m not looking to get in arguments; I’m just looking to fight,” continued the 29-year-old, who enters this weekend’s contest off a first-round knockout win over James Vick in July. “I always feel like I just have to be straightforward with it and I don’t have to build a persona or a character because my fights are very entertaining and people want to see me fight; they know what my fights entail and they’re excited to watch my matches. I don’t need to do the Colby Covington, ‘make up some fake persona, talk a bunch of trash’ because my fights aren’t boring as hell.”

No one could possibly argue otherwise.

Over the course of his 10-year, 27-fight career, the rangy Hooker has only gone the distance a handful of times. All eight of UFC wins to date have come by way of stoppage, including each of his five bouts since he stopped “shooting himself in the foot” by competing in the featherweight division.

The move back to lightweight followed a 3-3 run in the Octagon where he alternated wins and losses, offering glimpses of the dynamic talent that has become his calling card as a member of the 155-pound ranks while struggling to find consistency inside the cage. It also coincided with a move home to Auckland and making the shift to train full-time with Eugene Bareman and the team at City Kickboxing.

“I knew Eugene as a training partner initially and I came to him for a camp but it was very last minute and there was not much he could do to my skill set and my game,” said Hooker, who worked with Bareman and company in advance of his UFC 192 loss to Yair Rodriguez. “He encouraged me to travel and he encouraged me to go and train other places and he did the same with Brad Riddell — encouraging us to go and experience it for ourselves so we could see what’s out there and what the level of coaching was around the world.

“He pretty much gave us the boot and we came crawling back at the end of the day.”

While Hooker said he and Riddell explored their options abroad before realizing what they had available at home, the surging contender contrasts his training odyssey with the deep roots established by his teammate, training partner, and self-described “frenemy,” interim middleweight champion Israel Adesanya, who will follow Hooker into the Octagon on Saturday evening as he takes on Robert Whittaker in a title unification bout to close out the show.

“A guy like Israel is very strange because for the last 10 years, he’s been in the gym; he’s not gone out and looked for other coaches,” said Hooker. “He always knew within himself that he was in the best place he could possibly be in the world, so that’s a lot of faith and a lot of trust and I can see what he means now.

“Working with a new coach is like learning a new language and it has taken me this long to get familiar with the language we speak at City Kickboxing,” he added. “Now that I see it, now that I’ve put it all together, I guess that’s where the confidence comes from and it’s only building.”

With each passing fight, Hooker has continued to show fans and observers what he’s believed all along — that he’s capable of competing with the best lightweights in the world — and this weekend, he gets his biggest opportunity to date when he shares the cage with Iaquinta in the penultimate bout of the evening.

Iaquinta is one of those fighters whose place in the division and standing amongst both his peers and the people who watch the action on television can’t truly be defined by his record.

For a couple years, he was the unknown commodity in the lightweight division — a talented fighter who took a two-year sabbatical after scoring his fourth straight victory only to come back, clobber Diego Sanchez and spend another year on the sidelines. When he did return, Iaquinta went the distance with Khabib Nurmagomedov at UFC 223, stepping up to face the current lightweight champion on a day’s notice.

He then rebounded with a unanimous decision win over Kevin Lee on the same night Hooker lost to Barboza last December in Milwaukee, and then followed it up with a gutsy, five-round battle against Donald Cerrone earlier this spring that cemented Iaquinta as one of the best fighters in the 155-pound weight class.

And that’s precisely why Hooker was keen on securing this matchup.

“(My intention is to finish him) and there is no secret about it,” he said. “Whether it be by submission or by knockout, my intention, without a doubt, is to get him out of there before the 15 minutes are up and doing so sends a very strong message to the Top 5 because he has done five rounds with Cowboy and he has done five rounds with the champ.

“That sends a very strong message to the rest of the division that I’m a very serious guy and I have a point to prove.

“To be in this position, to be honest, it feels deserved; I feel like I’ve earned my place,” Hooker said of the opportunity to face the sixth-ranked Iaquinta on one of the biggest pay-per-view events of the year. “I don’t want anything handed to me in this sport or in life — I want to earn everything — and the position I’m in now feels very earned.

“I feel like I earned this position and I’ve earned this opportunity to fight Al and I’m very capable of beating these guys in the Top 10 and the Top 5. I know what I’m capable of and the last piece of the puzzle is showing the world and showing everyone else and proving it to everyone else.”

Just as he passed a note to Iaquinta asking him if he’d like to fight, Hooker politely requested an opportunity to compete on this card following his win over Vick in San Antonio, wanting nothing more than to be a part of this historic event.

How it has all come together is beyond wildest dreams and something he has to keep himself from thinking about too much as he readies to get back into battle on Saturday night.

“This is one for the legacy and I definitely know that,” he added. “This is one that you can look back on in 10 years, 20 years and people in New Zealand will still be talking about it as one of the biggest moments in New Zealand combat sports history and I’m grateful to be a part of it.

“I’m getting a bit excited just talking about it and I just can’t wait to get in there and show people how badly I want this.”