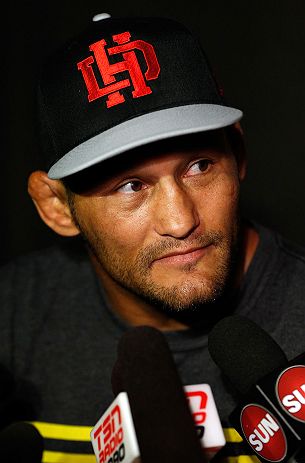 As far as Dan Henderson is concerned, the sooner everyone forgets his UFC 157 split decision loss to Lyoto Machida in February, the better. It is a constant reminder though, even as he gets ready for a UFC 161 main event clash with Rashad Evans in Winnipeg.

“Why is everybody always talking about that fight?” said Henderson of the Machida bout. “I thought I’m promoting Rashad Evans.”

He is, but after three rounds of less than scintillating action against “The Dragon” warning flags went up that a) Hendo wasn’t fully recovered from the knee injury that scrapped his UFC 151 title fight with Jon Jones, or b) Father Time had finally caught up to the 42-year-old.

He says neither assessment would be correct, simply putting the result down to a stylistic nightmare for him.

“It didn’t feel like a fight,” he said. “And it’s not what I’m known for. I’m not known for boring fights. It was very frustrating to be in there with somebody that didn’t want to fight.”

After years of epic battles and highlight reel knockouts, Henderson could be excused for one bad night, and even with the Machida bout still a sore spot, he doesn’t expect a repeat against Evans.

“I’m not real concerned at all with that,” he said. “Rashad and Machida are two totally different fighters with different styles. Nobody runs like Machida does.”

That’s not to say Henderson has an easy task in front of him, someone who will stand in front of him and see if he can take Hendo’s near mythical right hand known as the H-Bomb. Evans is a former light heavyweight champ with the speed, power, and wrestling to give anyone fits, and after dropping back-to-back decisions to Jones and Rogerio Nogueira, “Suga” is hungry for a statement making win.

As for Henderson’s side of the equation, “I’ve just gotta be real patient with him. I don’t want him to take me down and control me for three rounds, so I’ve got to make sure that I’m patient and don’t open myself up to get taken down real easy. But at the same time I’ve got to be aggressive and put my hands on him. So it will be a fine line right there to be aggressive, but not overly aggressive to allow him to take me down. And obviously, he’s got some knockout power and some good striking, and I’ve got to be aware of that as well.”

All valid points to be sure, but the one that sticks out the most is Henderson’s assertion that he has to be concerned about the Michigan State alum’s takedowns. This is coming from a two-time US Olympian, so you have to wonder where this statement comes from, simply because no one takes Dan Henderson down easy.

“It’s not a wrestling match,” he explains. “If it was, it would probably be a lot tougher for him to take me down, but when you’re out there throwing strikes and you put a little power behind your strikes, it’s a lot easier to get taken down. I just need to be aware of that and make sure I don’t get stuck trying to just knock him out and allow him to take me down easier.”

Words of wisdom from one of the most respected veterans in the sport, and one whose accolades and big wins could go on for days. He’s even one half of what many consider to be the best MMA fight of all-time, his 2011 win over Mauricio “Shogun” Rua. But without flash, headline making comments, or anything of that sort, do the younger mainstream fans appreciate what the former two division PRIDE champion has done in the sport?

“Who knows,” he chuckles. “I just kinda pay attention to what I’m doing and what I need to be doing to prove myself, jump up the ladder, and be the top guy in the world. Obviously my style is fairly aggressive and I try to be offensive and aggressive to be more entertaining for the fans as well, and hopefully they’ve liked me over the years, even the new fans that watch me for the first time. Hopefully they weren’t turned off by the last fight. (Laughs) But I’m pretty comfortable in my own skin and who I am, and what type of fighter I am.”

And despite turning 43 in August, he doesn’t see the finish line just yet.

“I love the challenge and it’s just a fun sport to be in,” he said. “It’s fun for me to go out and learn new moves and do things that I can try and do, and it’s fun to beat people up sometimes.”

He wouldn’t mind getting a third crack at UFC gold either, something that could get closer with a big win over Evans.

“It’s definitely something that I’ve put as one of my goals to achieve,” said Henderson, who lost UFC title fights to Anderson Silva and Quinton Jackson. “So yeah, it’s something I’m striving to achieve, but it’s not something that if it never happens I’ll lose sleep over.”

That's Hendo - no nonsense to the core.