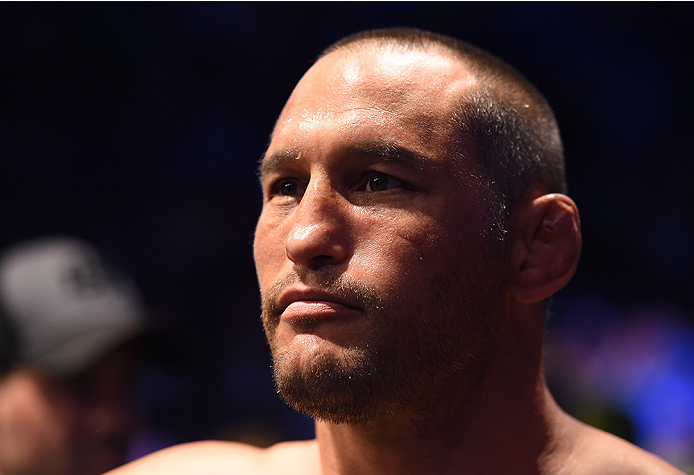 Dan Henderson isn’t one for labels.

The former Olympian turned mixed martial artist turned multi-divisional knockout artist shrugs off words like “legend” and “pioneer,” choosing rather to focus on things in the here and now. Granted, the California-based middleweight can’t fully escape acknowledging how much of an impact he’s had on the sport he loves and the generations of hungry fighters that have come up in his wake, but even in doing so he cops to influence with a tremendous amount of modesty in tow.

Henderson simply loves to what he does and would rather leave all the chit chat about who is this and that to other folks. And that’s far from the attitude an athlete with his resume and credentials could boast, but the 45-year-old former two-division PRIDE champion doesn’t concern himself with what has come and gone. Henderson knows he’s one of the last men standing from a time long since passed, and he’s grateful his body has held up to allow him to sling leather at the highest level in the sport for as long as he has.

That’s enough for him it seems.

“I’ve been a part of this sport for a long time and was in this sport while it evolved into what it is now. I’d like to think I’ve had a positive impact on making that happen but I don’t really know how far that reaches. Hopefully I can continue to help grow this sport and live up to that status, I guess.”

When you consider how short most MMA careers actually are, Henderson’s time amongst the elite becomes truly impressive, but yet again the overall journey isn’t something the former Strikeforce light heavyweight champion gives much thought to. The only thing on his mind at the current time is settling the score with longtime rival Vitor Belfort, as the two legendary sluggers will fight for the third time this weekend in Sao Paulo, Brazil.

Both have found victory on previous occasions, but it’s their last meeting that eats at Henderson a bit, as “The Phenom” put him away with strikes in the first round of their second tilt. That’s a memory the brick-handed middleweight is eager to erase and that’s what he plans to do inside the Octagon on Saturday night.

“It’s just another fight, but the goal in every fight is to make sure I win. With my performance in the last fight against him I really wanted to make sure I got the chance to get in there with him again. I can’t remember the last time I asked for a particular fight and this is one that I asked for. I want to make sure I end this trilogy winning.”

When fighters who carry the reputation for settling the opposition like Henderson and Belfort do step into the Octagon, there is practically a guarantee for a shootout when things get underway. Just knowing Belfort is going to stand toe-to-toe and let the chips fall where they may presents a situation Henderson finds appealing, and he’s excited to dish out what he was on the receiving end of last time they scrapped.

“It’s nice to go in there with someone that wants to fight and doesn’t want to take me down the entire time,” Henderson said. “But at the same time, Vitor is very dangerous and he’s someone I have to make sure I’m careful with on my feet. That’s kind of what happened last time. I made a mistake, got caught and Vitor came out on top. I’m not going to let that happen again.”

Making that walk through the raucous crowd in Brazil on Saturday night, Henderson will be looking to build off a dynamite performance the last time he battled it out under the bright lights. Back in June, one of the gamest men to ever put on the four-ounce gloves returned to form as he drubbed middleweight powerhouse Tim Boetsch in a main event bout in New Orleans.

Having lost back-to-back showings prior to his bout with “The Barbarian,” Henderson knew the pressure was on and that the critics were calling for his demise on the proverbial hillside.

Nevertheless, the ageless wonder put Boetsch on the canvas in a fashion that signaled he wasn’t going to be riding off into the sunset anytime soon.

“It felt pretty good to get a win considering the last couple of years I’ve had,” Henderson said. “It felt good to be able to perform the way I know I’m capable of and the way I train for. It was probably a little bit more special than most wins in that regard.”

Just how far Henderson’s journey through the sport will go is anyone’s guess at the current time, but one thing he can take a tremendous amount of pride in is how much his career - and those who are also cut from the grinder’s cloth - has impacted the world of wrestling. Long before Henderson made his name as one of the best middleweight fighters on the planet, his work on wrestling mats around the world had already made his name one to remember.

His eventual transition into MMA came at a time when the options to make a living for wrestlers were few and far between, and he’s happy to see how things have changed since his early days in the sport. Every year, more and more former collegiate wrestlers are finding a home in MMA and it’s something Henderson believes will continue to have a trickle-down effect in the years to come.

“The growth of MMA into what it is now is great for the sport of wrestling,” Henderson said. “It’s even great at the youth level because these kids see a wrestler do well and then they become interested in wrestling, and take up wrestling at a young age. I think MMA has helped wrestling stay in the limelight a little bit and helped to show the value of it.”