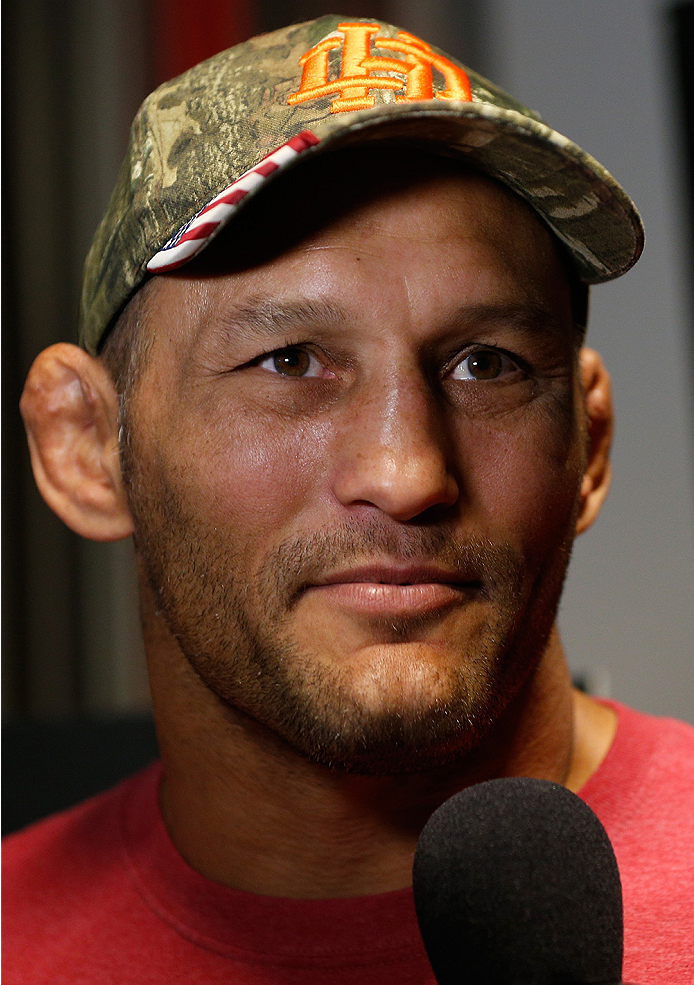 There is an ease to Dan Henderson you wouldn’t expect to see in a fighter of his caliber and status. Almost a nonchalance if you will, as Hendo’s laid-back persona outside of the Octagon is a stark contrast to the hovering violence that is one “H Bomb” away from being unleashed when things go live on fight night. Henderson is a man whose “been there, done that,” approach to the fight game is backed up with a rock solid resume lined with some of the greatest names to ever compete in the sport.

Where fighters with a quarter of the stock Henderson has proven to have under the bright lights are constantly hitting the self-promotion button, the Temecula-based MMA legend prefers to let his track record do the talking. And for good reason because that track record is arguably one of the greatest in the 21-year history of mixed martial arts.

Yet, such is the former two-divisional PRIDE champion’s modesty that he isn’t content with looking back at the past or dwelling on things like legacy and the like. For the better part of two decades, the Team Quest founder has been wrecking shop against the toughest competition on the biggest stages around the globe, and with more work yet to be done there is no time to put his focus on the rear view mirror.

That’s just how the former Olympic wrestler sees things and that isn’t likely to be changing anytime soon.

“I’m certainly not ashamed about it,” Henderson replied in regard to his impressive resume. “I still feel like I’m able to achieve more so I don’t want to stop and reflect on what I’ve done when I’m not done yet.”

Throughout his 18 years as a professional mixed martial artist, the 44-year-old knockout artist has competed in - and championed - a wide variety of weight classes. And while much of Henderson’s second stint in the UFC was as a perennial contender in the ranks of the 185-pound division, he made his return in 2013 as a light heavyweight.

As soon as Henderson stepped foot into the Octagon again he was heralded as a potential title contender at 205, and after defeating Mauricio “Shogun” Rua at UFC 139 in November of 2011, his shot at Jon Jones’ light heavyweight strap was set to materialize. Yet, injury and circumstance would prevent that bout from ever coming to fruition, and a rough patch where Henderson dropped four of his next five showings pushed him out of potential title contention in 205-pound waters for the foreseeable future.

That said, a fighter doesn’t forge a career over the course of two decades without having the ability to adjust and adapt, and that’s precisely what the heavy-handed slugger did following his loss to Daniel Cormier at UFC 173 back in May. He’d been juggling the decision to return to the middleweight ranks in the lead-up to the bout, and getting out-muscled in the contest provided the proof and the decided factor in making that jump a reality.

“I wasn’t hesitant about going back to 185 and I was pretty much saying before my last fight that I was going to go back down to that weight,” Henderson said. “I fought one more time at 205 and then this fight came up so I made the drop back down to middleweight. I’m fine with either weight class, but after my last fight at light heavyweight, they seemed to be awfully big for me in that weight class. I’m comfortable fighting in either weight class though.”

The last time the former Strikeforce light heavyweight champion competed inside the Octagon as a middleweight, his right hand ensured Michael Bisping would forever be a highlight when he starched “The Count” at UFC 100. This Saturday night in Stockholm, he will once again return to the 185-pound fold when he squares off with another fighter who has championed numerous promotions throughout his career in Gegard Mousasi at UFC on FOX: Gustafsson vs. Johnson in Sweden.

While both fighters have been under the same promotional banner at numerous times throughout their respective careers, their meeting will finally come under the bright lights of the sport’s biggest stage. Henderson always assumed they would collide at some point and is excited for his chance to finally mix it up with “The Armenian Assassin.”

“[Mousasi] was in Strikeforce when I was there and in PRIDE for a little bit during the time I was fighting there as well,” Henderson said. “This fight is something that was probably going to happen eventually anyway. He is a tough opponent and he represents the sport well. It will be fun to get in there and fight him.

“He’s had trouble with guys who put him on his back and pressure him. I think the biggest thing with any fight, and not just this one, is making sure I fight my fight and stick to my game plan. I can’t let him do what he wants to do and I need to dictate the fight.”

With a victory over the talented striker this weekend in Stockholm, Henderson would remain relevant in a title picture that has gotten increasingly more competitive over the past two years. That said, should he suffer a setback against his Dutch opponent on Saturday, the critics will come out in mass to say that his time as an elite-level fighter has passed.

Yet, where fellow legends of the sport and fighters who also helped push MMA to the level of recognition it now enjoys have long since retired, Henderson is still hammering away and holding his own against wave after wave of fighters from a different generation than the one he ushered into existence back in the early 2000s.

But that’s just who Dan Henderson is. There have only been a handful of men who have proven to be better on a given night over the course of his 18-year run, and Father Time has yet to be one of them. Henderson plans to keep it that way and believes there are still plenty of miles to travel before he finally sits back and looks at what has been a remarkable career.

“I can’t imagine not being able to compete with the top guys,” Henderson said. “If that is the case then I shouldn’t be competing anymore. I know I’m able to beat these guys and that’s why I’m doing it.”