A gift from Damon Jackson's daughter personifies everything the 32-year-old Texan is fighting for
By Thomas Gerbasi, on Twitter: @TGerbasi • Sep. 30, 2020

After nearly five years, Damon Jackson was back in the UFC, but he only had three days to get to Las Vegas and make it work. So it was time to hustle for the 32-year-old Texan, something he’s been accustomed to.

Seems he’s taught that work ethic to his four daughters too, as his 11-year old came home from soccer practice, found out her dad was going to be fighting Mirsad Bektic in the UFC, and got to work on a painting for him.

“She sets her alarm, wakes up when I was going to leave at 4:30 in the morning and shows me this painting she stayed up all night to paint,” said Jackson. “She painted the letters ‘UFC’ and on the bottom she put quotes that said, 'follow your dreams,' 'dream chaser,' 'number one dad.' That was the coolest thing.”

The featherweight veteran had to get to his garage fast to hang the painting, not because he was in a rush, but because it was getting a little dusty in the Jackson home. Looking back, he realized that his daughters (11, 8, 6 and 3) didn’t know anything else but their dad as a fighter. That involved a lot of sacrifice, a lot of missed family gatherings, but they all understood what it meant to him. 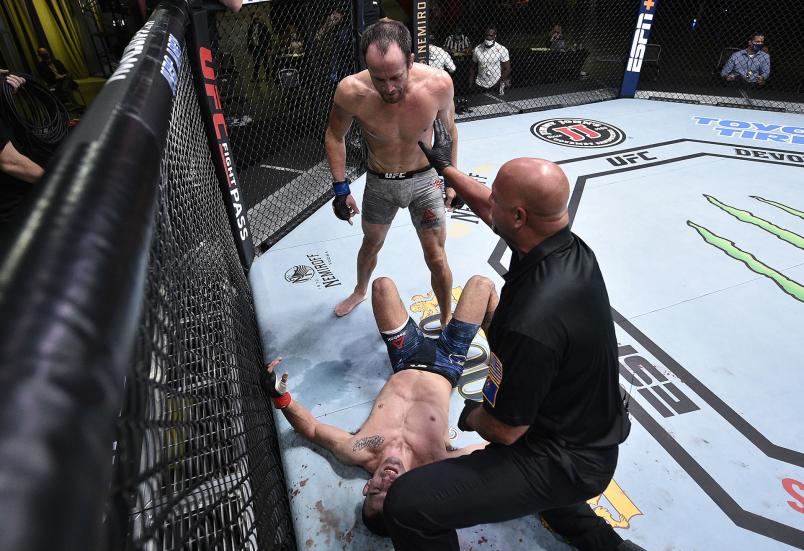 Damon Jackson reacts after his submission victory over Mirsad Bektic in their featherweight bout during the UFC Fight Night event at UFC APEX on September 19, 2020 in Las Vegas, NV (Photo by Chris Unger/Zuffa LLC)

All he had to do now was go to Vegas and win the fight, a task easier said than done against a talent like Bektic, but Jackson, a pro since 2012 with 22 bouts under his belt, wasn’t fazed in the slightest.

“I was not scared of him, not even a little bit,” said Jackson. “And when he got in my face at weigh-ins, it really pissed me off.”

Jackson kept his cool, knowing that while his gas tank wasn’t going to be full, he had the experience edge on his foe and Sayif Saud and the Fortis MMA squad in his corner. That’s all he needed. That, and a few submissions that he liberally applied to Bektic throughout the fight until he finished him with a guillotine choke at 1:21 of the third round.

“Obviously, I took the fight on three days' notice so I'm not gonna be my perfect self and be able to go hard all three rounds,” said Jackson. “But he was going so hard for the takedown and going so hard just trying to hold me down, I was like, this guy is gonna burn his ass out and it's gonna be me in the second and third for sure.”

In the third, it was Jackson, and he knew it before the round even began.

“I thought, this guy's got nothing left and I'm starting to feel like I'm warming up. It was good.”

It was, and Jackson’s 18th pro win was likely his biggest. He had his first UFC victory after going 0-1-1, 1 NC in his first stint in the promotion in 2014-16, he got a Performance of the Night bonus, and he now has a fresh start in the place he always wanted to return to.

“It was refreshing to get a shot again,” he said. “I know I can compete with the best and I think I proved that on three days' notice. But I don't want to sit here and throw my name in everybody's face and be all arrogant; I just want to compete. I want to take the momentum and run with it.”

Jackson is hoping to be back in action in November, but he has left his phone on if the UFC wants to call a little earlier.

“I want any fight they're gonna hand me,” he said. “I'm not gonna complain about anything. I'm just here to fight and here to take whatever they give me. And that's still where I'm at right now. I think I got a big win, and that's great and everything and I have a lot of momentum, but I'm still in a position where I'm gonna accept the next fight they give me, whoever it is and whatever day it is. I'm hoping for November, but I'll fight in Abu Dhabi next week. I'm ready to go whenever.”

“This is a real short-lived career, and there's only so much s**t talking you can do and only so much calling out and so much nonsense you can do,” he said. “At the end of the day, you gotta step it up and you gotta win your fights. I have 18 wins, I have 17 finishes, and I'm begging for a fight. With the UFC, they need fighters every week, they need someone to step up or step in and put on a show, and I'm the guy. With this sport you only get a handful of opportunities to really make a big name for yourself and I've been doing this for so long and I just want to go as hard as I can for the next few years and be happy with it. Being back in the UFC is a huge part of that being happy. I'm just blown away that I made it back and that I got that first win.”

The Bektic win was Jackson’s 14th by submission. You would assume that it’s time for him to get that BJJ purple belt upgraded, right?

“I have a purple belt, I've had it for going on my ninth or tenth year,” he laughs. “I don't do all the ceremony stuff that everybody does to get their belt, so once that day comes, I'll just skip the gym. (Laughs) I feel like you should be ranked off toughness, not how many classes you go to.”

In that case, call him a black belt in toughness.

“It's kind of weird,” Jackson admits. “It's like if I sit there like a grown-ass man waiting on another man to give me a belt and tell me how tough I am, I'd rather just go compete.”

He laughs again, happy to be where he’s always known he belonged. His daughters knew, too.

“It's not a waste of time,” he said of his fight career. “I missed their games, I've missed baby showers, their friends' birthday parties. I've missed so much stuff, and they see that it's not all a waste of time. It means a lot to me and it's cool to see that they respect that.”