Damon Jackson: Back to 145, Back to Work 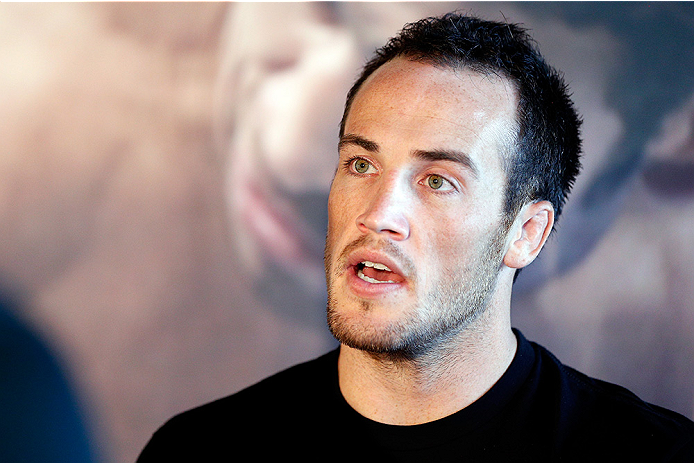 Come Saturday night in Goiania, Brazil, UFC featherweight Rony Jason may not have to worry just about his opponent, Damon Jackson, but Jackson’s uncle as well.

“He keeps up with everything,” Jackson laughs when discussing his uncle. “He knows everything about whoever I’m fighting and he keeps me up to date. So I don’t really have to go fishing around for anything. He’ll send me stuff once a week or so.”

Call it a built-in scouting service for the 26-year-old Jackson, who was introduced to the sport by the same uncle 16 years ago, something that didn’t sit too well with his parents.

“He knew everything about it, kept up with all of it, and studied a little bit of taekwondo and Muay Thai,” Jackson recalls. “Whenever I would go and visit them, that’s all he would watch. He would just sit in his room all day and watch this stuff. But then, my parents didn’t see any sport in it. It was a little too gruesome for a ten-year-old kid to watch, so they didn’t let me watch it.”

With MMA off the board in the Jackson house, the youngster stuck to the wrestling room, eventually going on to become an NAIA All-American for Missouri Valley College. In the meantime, he started watching the UFC during his high school years, and after seeing the first Forrest Griffin-Stephan Bonnar fight, he was hooked, though he didn’t know at the time his enjoyment of the sport would lead him to the UFC. But competitive fires don’t go out that easily, and once college was over, Jackson’s die was cast.

“It brings out a lot of good in me as far as competing,” he said of MMA. “It’s something you can’t get from any other sport.”

That doesn’t mean his parents were on board early on.

“Dad would throw up two hours before the fight and just pace back and forth the whole time while I’m warming up,” Jackson chuckles. “I think they’re okay with it now, just because they know how much I enjoy it and how much good it’s brought out of me.”

These days, they don’t have much to argue about. Dallas’ Jackson is 9-1 as a pro, he’s on the UFC roster, and he’s getting a business trip to Brazil this week. Not bad work if you can get it, and Jackson is happy with where he’s at, but not content, because there’s work to be done.

First step – get that UFC win out of the way, something that eluded him last August when he was submitted by Yancy Medeiros at UFC 177. In Jackson’s defense, he took the fight on short notice outside of his usual 145-pound weight class, but the Texan isn’t looking for excuses. He won’t even blame the first-time UFC jitters because apparently he didn’t have any.

“I felt so clear and everything was perfect,” he said of the Medeiros bout, which was fought at lightweight. “It couldn’t be better. That might have been what the jitters are. (Laughs) I’m usually really nervous and kind of going through the fight and doing the whole thing over and over in my head. In that fight, I was really calm and nothing really bothered me about any of it. I was enjoying everything about it.”

Except the end result, which saw Medeiros pick up a Performance of the Night bonus and Jackson suffer the first loss of his pro career. He’s had a long time to think about it too.

“That loss has been in my head every single day because it just takes that one little slip up and the fight’s over,” he said. “That’s something I’ve definitely taken into my training as far as really breaking down my own technique. I’ve had so much time to sit back and really work on a lot of the things that I haven’t put a lot of focus on.”

That’s the positive aspect of a nine-month layoff. The negative part? Jackson just wants to fight.

“From when I started my amateur career, I would fight in the summer and then wrestle all year and go back into jiu-jitsu and MMA for the summer,” he said. “This has been the longest gap I’ve had in competing in anything.”

But does he have those necessary nerves back?

At least by facing Brazil’s Jason, he’ll be in with an opponent that he won’t have to look for on fight night. The first TUF Brazil winner always brings the heat, and after losing his last bout to Robbie Peralta a year ago, he’s another fighter eager to throw hands once again.

“He’s got an exciting style,” Jackson said of Jason. “He’s got a lot to look out for on the feet, and obviously on the ground he’s a strong competitor. So going into the fight, it’s a great matchup and it’s going to be an exciting fight. I’m there to fight and I want to be in their face, whoever it is, and take the fight to them, and he’s the exact same way.”

“I hope everybody can see that I’m ready to fight and I just want to fight as much as I can and go out there and fight as hard as I can,” Jackson said. “If that means getting a finish ten seconds into a fight or if it’s a three or five-round fight, I want to get the most out of it, and if that gives the fans what they want, that’s great. But I’m always looking for that finish.”