Having Literally Grown As A Mixed Martial Artist Alongside The UFC And The Rise Of MMA, Damon Jackson Has Almost Seen It All — But That Doesn't Stop Him From Adapting
By Thomas Gerbasi, on Twitter @TGerbasi • Mar. 11, 2022

When we last checked in with Damon Jackson before his October fight against Charles Rosa, the featherweight veteran had just jumped in (reluctantly) to the world of social media. And it worked, as his request for a fight through Twitter ended with him facing (and beating) “Boston Strong.”

Since then, well, he’s not tweeting three times a day, but he is embracing the platform a little, and he’s even added Instagram and Facebook accounts to the mix, though those haven’t been as active.

“I'm trying to think of something to say that's worth saying, I just don't know what to tell people,” he laughs. “I don't know if I could help anyone out.” 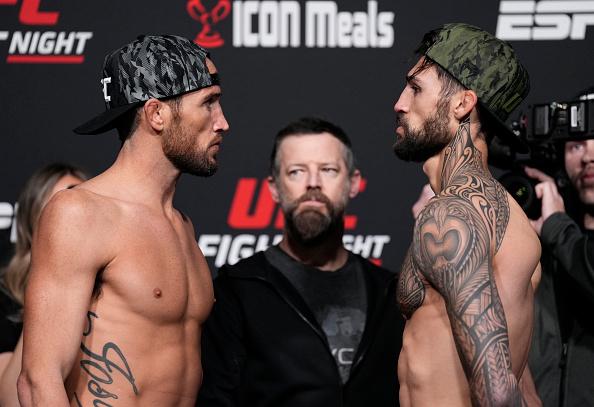 Who would have guessed it – 33 years old and embracing 2022 with both hands.

“I thought about getting a tattoo, also,” Jackson laughs. “It seems like a lot of the guys that have tattoos get good fights or have good fights. I've got one - my daughter's name - but I gotta get something hardcore.”

It’s a new world out there for Jackson, a pro since 2012 who has been competing in one combat sports form or another since he was in the seventh grade. That’s a lot of experience to be taking into a fight, and “The Leech” will do it again on Saturday against Kamuela Kirk, secure in the reality that he’s seen a lot more than most of his peers.

“It's insane what the UFC does and how they do it,” Jackson said. “I started watching UFC in fifth grade or so, maybe a little bit older, and in seventh grade, I was like, ‘You know what, I'm gonna wrestle because I know the wrestlers win in the UFC.’ And there weren't any of my friends that really watched UFC at the time. My uncle watched it, so I watched it with him, and I really got into it.

"You see it now, and it doesn't matter what city you go to, there's always a really good jiu-jitsu school or really good kickboxing. There's really good schools everywhere now and it's so popular. A lot of people who were never aware of the sport are just more aware of it and as they have kids or if they are kids, they get to watch it at a much earlier age. And the commentators do a really good job of breaking the stuff down so people have a pretty good idea of what they're watching. How the UFC's grown their company is impressive because it's definitely opened the eyes of a lot of kids and gives them something to focus on.” 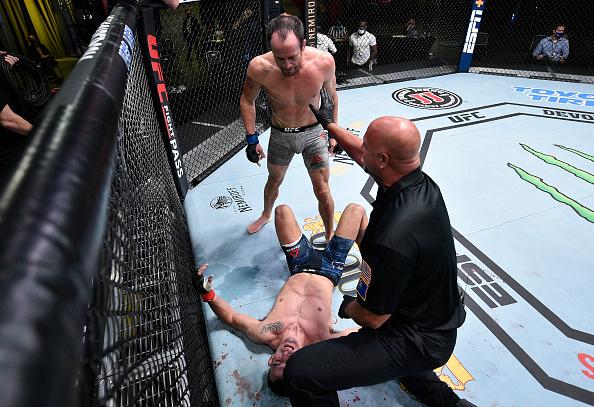 Damon Jackson reacts after his submission victory over Mirsad Bektic in their featherweight bout during the UFC Fight Night event at UFC APEX on September 19, 2020 in Las Vegas, Nevada. (Photo by Chris Unger/Zuffa LLC)

Some of those kids are now fighting in the UFC or closing in on it, and they’re lucky that they don’t have to take the road so many of the vets had to take. For fighters like Jackson, that road to the top can be dusty and dirty – literally.

“I had an amateur fight in a rodeo arena,” he recalls. “It was an outdoor rodeo arena that had a cover over the top, and we had to warm up in these stalls. (Laughs) I am not playing at all. There was not any piece of mat, nothing to get on the ground with, so you couldn't drill wrestling or jiu-jitsu, so we're warming up in the stalls and we had to walk from there to the middle of the arena, and all it is, is dirt. So you would walk out there barefoot and get into the cage, but first there was a boot cleaner and you had to wipe your feet off on that, step on a towel and then get in the cage. I'm the third or fourth fight of the night, and this cage is absolutely filthy.”

Then there was the time he had to pay $500 to compete in an amateur fight, or that time when someone in the first fight of the night threw up in the ring after taking a body punch and the rest of the card had to avoid that part of the canvas that wasn’t exactly cleaned properly.

Those experiences make for some great stories years later, and also add a layer of grit to someone who gets into a tough fight and needs to pull on some reserves and veteran tricks. Jackson is not afraid to do that, and since returning to the UFC for his second go-round, he’s won two of three, submitting Mirsad Bektic in a Performance of the Night effort, and decisioning the always tough Rosa. And though he says, “I'm not that guy” when it comes to reflecting on the past, he does appreciate where the sport has come. 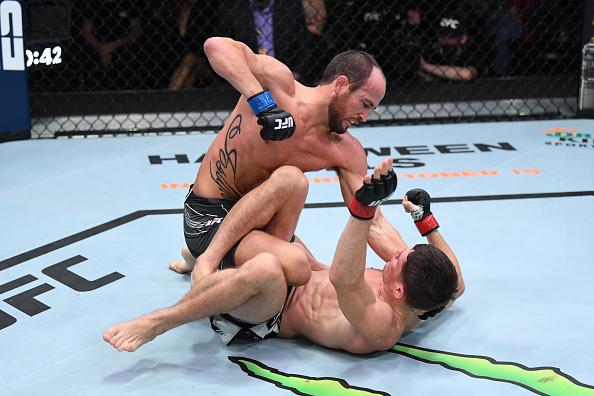 “It's cool to see and it's kinda surreal to see how big it is,” Jackson said. “Like when they sell out these huge arenas, you see how many people are true fans. People know styles and people know the fighters really well and it's just so different because whenever I first started, you could be fighting in a local show and be the coolest guy in your town, but no one knew who you were outside of that.

"Now, a smaller promotion like LFA travels everywhere and they have a pretty good following. It's definitely changed a lot. But I've been so busy trying to get to the next level this whole time that I really try not to think about everything that I've done in the past. To see this sport grow the way it has, I've been doing this since I was nine, so, for me, I've been trying to get better since then. I've been training every day and I train constantly, doing something every day, so I've never taken a step back and realized how big the sport has grown.”

Jackson is embracing that change, though, so don’t call his embrace of social media a midlife crisis.