Just a little while in, Damon Jackson has his blue check on Instagram and apparently his social media experiment is working. So what’s next on the agenda from the Texan?

“My game plan for this camp is to not post anything about my fight or about my training,” said Jackson. “I just wanna go into this fight, and then after this fight, I'll start ramping it up. I'm trying to make it all click together. I wanna become like Paddy.”

Well, there is only one Paddy Pimblett, and Jackson’s tongue is planted firmly in cheek when he talks about reaching the social media heights of the Brit, but he is aware that with each win, the demand for more insight into his life will grow. He’s grudgingly fine with that, but he’s not about to deviate from what got him here in the first place to get a few more likes and followers.

“I just gotta keep winning, man,” he said. “I think that with all the extra bulls**t, you have choices. Like you either gotta be really good at fighting and win fights or you gotta be really good at talking s**t. So I actually do talk s**t pretty good, but I just prefer to win the fights without saying anything too crazy. But I actually do have a pretty good mouth if I need it.”

Jackson laughs, ready to roll if the platform demands it. 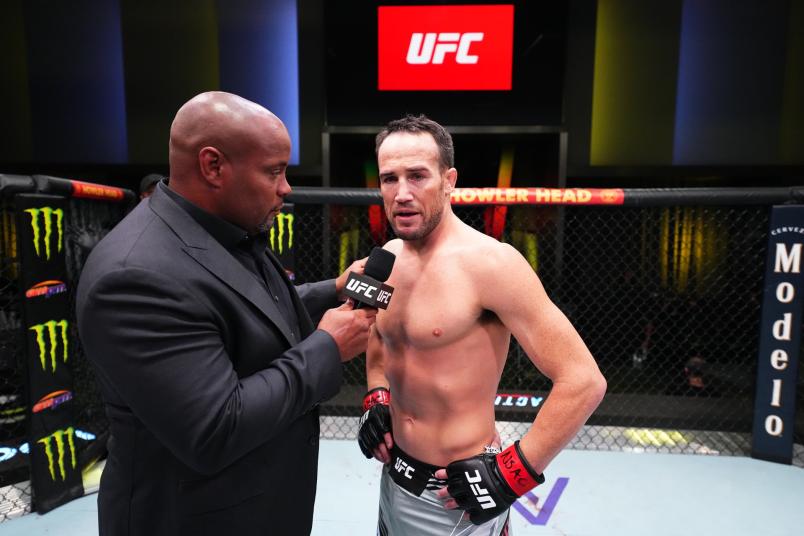 “Hopefully I get in that position where I'm on a pay-per-view card or I'm headlining a card after this fight and then I can kind of go back and forth with somebody. But I’m trying to keep it classy; it's hard to do nowadays.”

Again, the tongue is planted firmly in cheek, because even though his four daughters aren’t on social media, he has an example to set as a dad. That means he’ll stick to why he started posting on Twitter and Instagram in the first place - to keep getting the fights he wants.

“I gotta do enough on there to where I'm somewhat present on there,” Jackson said. “But I don't like to show too much of game plans or post pictures after workouts and having people see who I'm training with.”

And let’s face it, if he wanted to get into an online war of words with anyone, his opponent this weekend - Dan Ige - is not that guy.

“No, he's too cool,” laughs Jackson. “You know, we set this fight up. I hit him up and I was like, ‘Hey man, I've got nothing to respect for you. I really want this fight. I would love if we could figure this out.’ And he's like, ‘Yeah, you've
been tearing it up lately. You definitely deserve a shot at the Top 15.’”

The two featherweights wanted to scrap in December, but instead they’ll kick off the New Year in this weekend’s UFC Fight Night co-main event. Just like that. Two gentlemen agreeing to a prizefight.

“We actually had a little bit of conversation back and forth on direct message because I didn't wanna talk s**t. I hit him up and I was like, ‘Hey, you
know, I would love to call you out, but I don't wanna say the wrong
thing or whatever. I've got nothing but respect for you.’ Ever since we talked that once or twice, we haven't talked since then. We're both in fight camp mode.”

Now it’s fight week mode for the two pros, Ige trying to snap a three-fight losing skid and Jackson attempting to extend his current winning streak to five. It’s the best run of the 34-year-old’s career and if he can make it five in a row, that will be the kickoff for a 2023 to remember.

Respect? No bad blood? No pushing and shoving? Maybe Jackson is on to something when it comes to making fights on social media.

”I think that someone's got lead the way with that kind of stuff and I think that people are getting tired of it, honestly,” he said. “It's hard to keep up with that whole Colby Covington, ‘I'm gonna talk s**t to everybody’ kind of thing. And
that persona is not what I want my kids to see. I'm a full-time coach with the wrestlers and I just don't want them looking at me like that. And I definitely don't want my kids looking at me like that. So I think it needs to move past that now.

“I'm just the guy that's there to compete,” Jackson continues. “If I go out there and win fights, I'm getting bonuses, and I'm getting new contracts. I just signed a new contract, so it's nice. They (the UFC) are, they're impressed with what I'm doing, so I'm gonna keep doing it and I'm not gonna change anything up for  IG followers or anything like that. So, we'll we'll just keep rolling with it.”