"I think it’s gonna be one intense fight. It’s gonna be in your face and let’s get it on, plain and simple." - Damacio Page 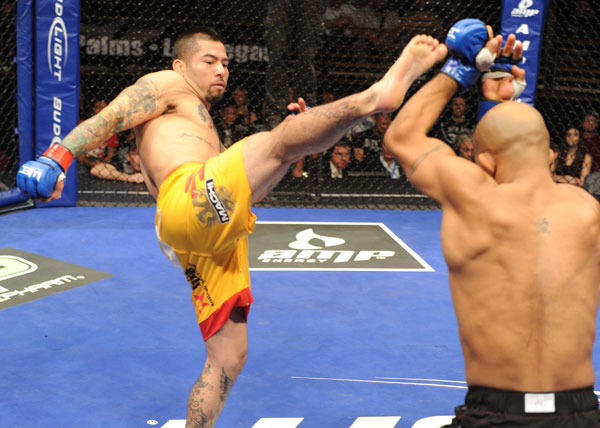 Greg Jackson didn’t want to do it, but eventually he had to.

It wasn’t done in a mean-spirited fashion or to make Page feel unwelcome. It was just some tough love from the renowned coach, letting his charge know that if he was going to get back to being one of the top 135-pounders in the world, he would have to completely heal from neck surgery before being allowed to train again.

“My mentality is, if I’m thinking about people (upcoming opponents), I’m thinking about training, about working, about doing something,” said Page, fully healed from last September’s surgery and getting ready for his return to the Octagon this Saturday against Brad Pickett. “And when I had the injury with my neck, it was the hardest thing to do because I’d go in the room and Greg would tell me to go home because I get in the room and I want to show moves. When I get a big injury, I have to separate myself because I want to train, I want to work, I want to do stuff and be in it.”

Eventually, Page and Jackson found a happy medium, as he promised not to work out when he entered the Albuquerque gym. Instead, he helped coach his teammates as he waited to get better. That wouldn’t have been the route taken by the “old” Page, a competitor so fierce that despite what happened on the town the night before or how beat up and injured he might have been, once he stepped through the doors of the gym, it was on.

“I was doing whatever I was doing and then I was coming into the gym and it was time to go, and that’s where a lot of injuries happen,” he said. “When I was younger and wrestling and doing other things, I could do it because I was younger. But now that I’m getting older, you gotta be a little bit smarter about what you’re doing and take the right approach. You can’t go 110% the first day back. And it was really hard to stay away, but I knew I had to because of the severity of my neck injury. That was the hardest part. Even with my shoulder injury, I was still young and dumb and I came back too early, so I had to go back and get it re-scraped and have other stuff done to it and then I was out another four months.”

It’s a wisdom and maturity that comes not just with time, but from going through several setbacks that make you realize that what you’ve been doing just isn’t working anymore.

For a while, Page was the most promising of bantamweight prospects, and he knew it. 3-1 in the WEC, with a lone loss to future champion Brian Bowles, Page was closing in on a title shot late in 2009, but injuries scrapped successive bouts with Takeya Mizugaki and Antonio Banuelos before he finally returned in late 2010 to face Demetrious Johnson, who upset him via third round submission. Four months later, he made his UFC debut, only to get beaten a second time by Bowles. Entering Saturday’s bout, he’s lost two in a row, a long way from when he felt invincible.

“That’s exactly what it was,” said Page. “I’m knocking people out, I’m submitting people, I’m destroying people, oh man, I’m ranked sixth in the world, one more fight I’m getting a title shot. And that’s what was going on. Then I had a shoulder injury and was out for eight months. Then I come back and have injuries here and there and then fight Demetrious Johnson. Then I come back, fight Brian and have another injury, and things could change real quick. You just have to stay positive-minded and work hard, and train hard and smart.”

And while you wouldn’t know it by looking at his record, he’s turned a corner in his life and career.

“I think when I was doing really good and everything was going right, the fast fame and all the other stuff got a hold of me,” he admits. “Your name starts to get big and you start to go drink and start to go have fun and you’re not really focusing on anything because everything’s going right. But I think in the last couple years, from the injuries and the losing and stuff like that, it made me refocus and get everything back to where it needs to be to get ready for this fight. I think I’ve grown more from these last two years from injuries and all this other stuff – physically, mentally, and emotionally, all the way around – and it just makes me a better fighter. I think I’ve been fighting mentally for the last two, three months that I knew I was gonna fight Pickett. I’m fighting every day in my head and I’ll be ready.”

This past New Year’s Eve, Page celebrated one year alcohol-free, and the time off has made him appreciate the gifts he has athletically, while also realizing that there is a life after fighting, one that may begin sooner rather than later should he sustain another serious injury.

“I already told myself after two major surgeries that if I have one more major surgery or some real bad injury, then I’m gonna hang it up because it’s not worth it for the rest of my life,” he admits. “There’s still a life after fighting. But as long as I stay healthy and I feel good, I’m gonna do this until I break down again. I doubt that’s gonna happen though, because I changed my lifestyle, I’m doing things right, and I feel good, so I’m not going anywhere for a long time. There is no doubt. If I didn’t believe in my neck or how strong it is, then I don’t deserve to be fighting.”

So no avoidance of black cats or walking under ladders for the 29-year old “The Angel of Death”?

“It’s unfortunate that I’ve had injuries, but there’s no superstition,” he said. “I just go in there and train hard and I think a lot has to do with my lifestyle changes. I’m not getting those injuries and I’m not making those mistakes and doing dumb things. I’m making the right choices to better my future as a fighter. So I think coming into this camp I realized what I was doing wrong, I fixed it, and I’m coming real strong into this fight.”

And if their histories tell the tale, this weekend’s matchup with Pickett will be a fight; not a wrestling match, not a dance, but an all-out slugfest between two guys who would rather get root canal work done than take a backward step. In other words, welcome to a meeting of two mirror images.

“Me and Brad are pretty much the same and I think it has to do with our mentalities – you’re either gonna go do it or you’re not,” said Page. “He’s a go for broke style fighter, just like I am. It’s go for broke or let’s go home, and I think it’s gonna be one intense fight. It’s gonna be in your face and let’s get it on, plain and simple. I have a lot of respect for Brad and he presents a big problem for anybody. He’s gonna bring it, he’s gonna be in your face, and it’s gonna be a great puzzle to figure out to disrupt his style of fighting, even though my style of fighting’s the same. It’s all about who implements the game plan first. It’s almost like fighting myself out there.”

Should he beat his clone, it will mark Page’s first UFC victory, and his first win overall since submitting Will Campuzano in October of 2009. Two and a half years is a long time to wait for anything, but Page doesn’t look at Saturday’s return as a continuation of what he started back in 2005. For him, it’s a fresh start.

“Everybody knew me as the vicious killer of WEC, and since then, what have I done?” he asks. “I’ve done nothing, really. Don’t get me wrong, I’ve gone out there and I’ve fought and I’ve fought in exciting fights, but I haven’t really done anything to turn people’s heads or even give ‘em an acknowledgement that I’m there, and I think now that the ’35 pounders are just coming up in the UFC and everybody’s really recognizing us, it’s like a rebirth. Go out there, start off the night, get a big win, and jumpstart everything again.”