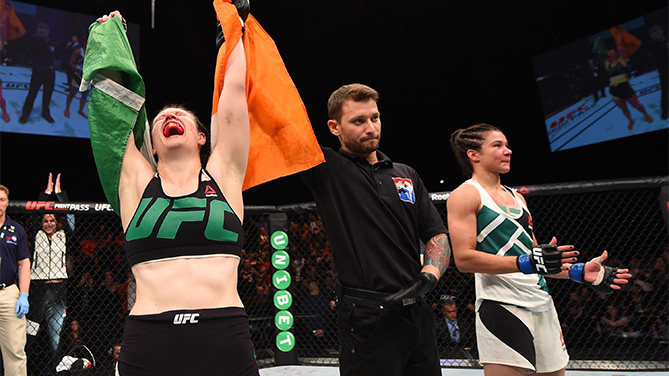 Irish strawweight standout Aisling Daly missed last year’s UFC event in Dublin due to her time on The Ultimate Fighter 20, but Saturday she made up for her absence, thrilling her hometown crowd at 3Arena by winning a three-round unanimous decision over tough Brazilian Ericka Almeida.

“That was one of the best moments of my life," Daly said. "These are the best fans in the world and that crowd was absolutely phenomenal. I could hear the crowd all singing along to my walkout song so that was really emotional. And to hear all that support during the fight, it was just the most amazing, memorable fight of my life."

Daly raced out of her corner as soon as the bout began, and the two traded strikes before locking up against the fence. The combatants traded control at close range, Daly eventually pressing her advantage and getting Almeida to the mat, where she landed a few hard punches on her foe.

Getting Almeida to the mat in the opening minute of round two, Daly continued to surge, the crowd cheering her on every step of the way. The Brazilian was able to reverse position in the second half of the round, and with under 90 seconds left, Almeida took Daly’s back but was unable to land the finisher.

Repeating her attack of the first round, Daly came out firing punches at Almeida to begin the final frame, and while the Sao Paulo native weathered the attack and locked up with the Dubliner, Daly stayed busy with her strikes and put her foe on her back and kept her there until the final horn, wrapping up an emotional and well-deserved victory. 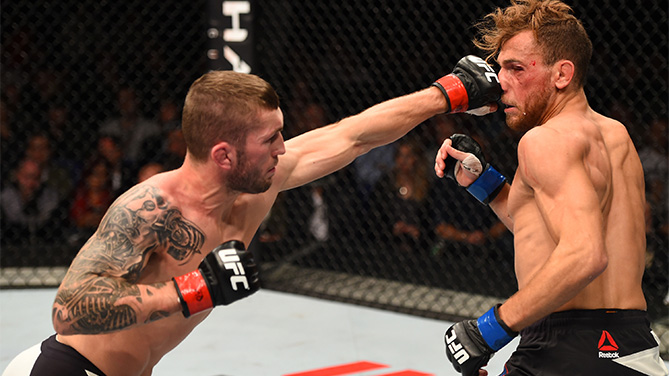 Scottish lightweight Stevie Ray made it three for three in the Octagon, outpointing France’s Mickael Lebout over three rounds.

Ray’s kicks to the body and straight lefts upstairs were on target throughout the first round, marking up Lebout’s face and keeping him from getting any significant offensive rhythm together. That didn’t stop the Parisian from pressing his foe, and he had some more success in the second round, closing the gap as the bout reached the midway mark. Ray was still leading the way though, maybe not explosively as he did in his previous two UFC bouts, but enough to pick up the decision win. 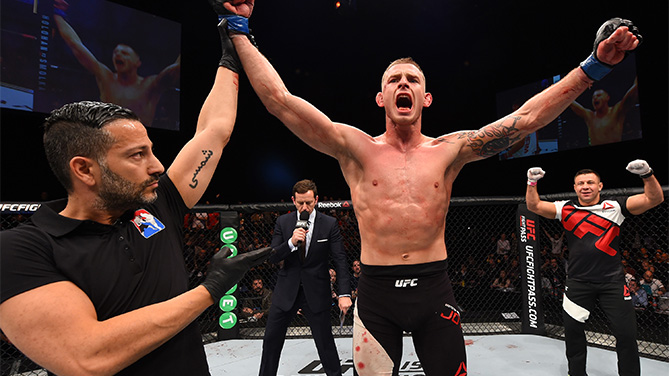 In his first bout since October of 2014, Poland’s Krzysztof Jotko picked up where he left off, earning his second consecutive win by taking a split decision over England’s Scott Askham in a middleweight contest.

Askham had success with leg kicks as the bout began, but ended up on his back in the second minute courtesy of a Jotko takedown. Jotko’s subsequent ground attack opened a cut over Askham’s left eye, but the Brit made it back up to his feet with under two minutes left. Jotko got another takedown, yet this time Askham fired off elbows from the bottom and nearly hit paydirt with an armbar. Jotko calmly pulled free and remained in control from the top until the end of the round.

The second round was closely contested, Jotko steady throughout, but Askham more spectacular with a front kick to the face that got a rise out of the crowd and the Orneta native, who had a couple nice upward elbows in the round.

Neither fighter could pull away in a significant way in the final round, with both of them having their share of success, but Jotko’s consistent attack earned him the hard-fought win. 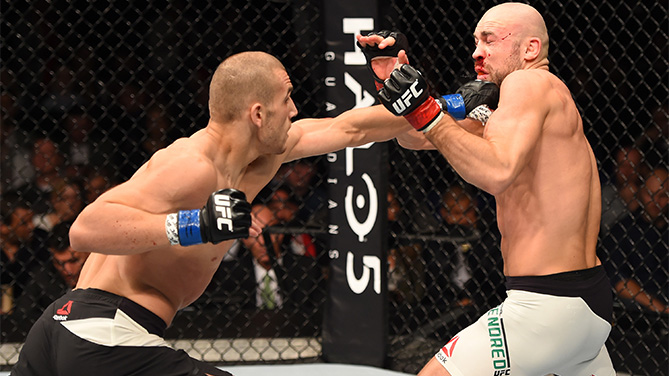 “This is the biggest win of my career,” Breese said. “He’s a warrior.”

After a brief feeling out process, Breese scored a flash knockdown with the first left hand he landed, and though Pendred shook it off quickly, it produced plenty of blood from the nose of the Irishman, who was now forced to go on the defensive. Midway through the round, Pendred (17-5-1) locked up with Breese against the fence, but the Birmingham product got free and resumed his stalking attack, mixing up his strikes nicely to the head and body. With under a minute left, a kick to the body appeared to stun Pendred, and two left hands later, the Dubliner was on the canvas, with a follow-up barrage forcing referee Leon Roberts to stop the fight at the 4:37 mark. 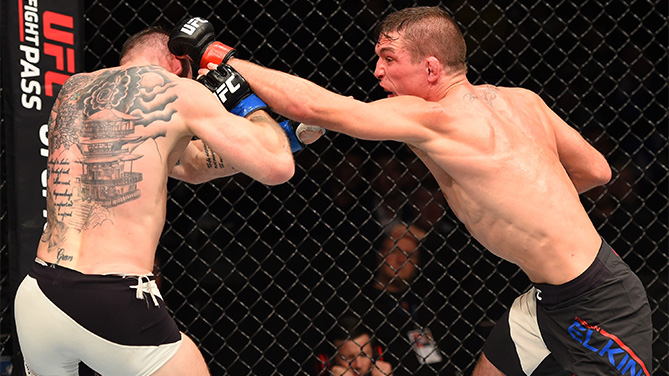 Whiteford (12-3) had success with his right hand in the early going, prompting Elkins (20-5) to seek – and get – the takedown in the third minute of the fight. The Glasgow product avoided any serious danger and got back to his feet, but Elkins was able to score a second takedown moments later. The Indiana native was able to keep his foe grounded a little longer this time, but again Whiteford got loose and back to his feet.

Elkins’ swarming ground attack continued to pile up the points for him in round two, even though the now bloodied Whiteford did find some daylight briefly with a crowd-pleasing judo throw in the closing stages of the frame. But in the third, the blue collar battler from the Midwest got right back to business with his best round of the fight, Whiteford game, but unable to stop his opponent’s exhausting attack. 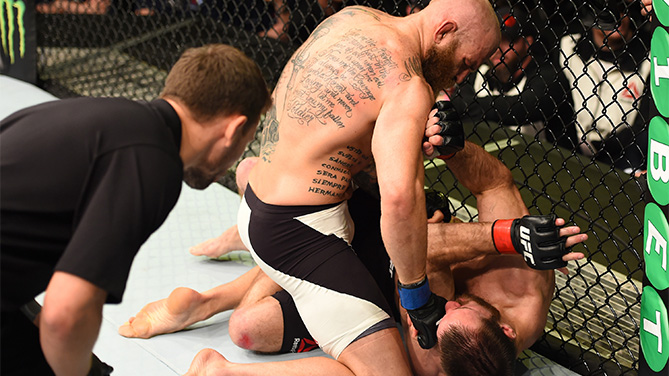 South Africa’s Garreth McLellan picked up his first UFC victory in the middleweight opener, stopping Texas’ Bubba Bush with two seconds left in the third and final round.

Just as in his UFC debut loss to Bartosz Fabinski, McLellan had difficulty avoiding a trip to the canvas and the bottom position, and Bush controlled much of the opening round there. McLellan did escape in the final minute though, nearly sinking in a guillotine choke before the horn sounded.

Bush put McLellan down on the mat in the first 30 seconds of round two, the South African popping right back up but remaining locked up against the fence. When the bout went back to the canvas, McLellan was able to land on top and in the mount, giving him a spark of life just when he needed it. Bush was able to work into half-guard, but he went no further, giving McLellan the opportunity to score with his strikes and even things up on the scorecards.

McLellan was fired up for the final round, while Bush was clearly battling on a near empty gas tank, and the “Soldier Boy” landed with a hard uppercut and scored a takedown as soon as the frame started. Bush managed to get upright as McLellan tried for a guillotine that put him on the mat again. Midway through, the two were standing again, but not for long, as McLellan landed another successful takedown.  This time, McLellan closed the show, with a series of unanswered strikes bringing a halt to the bout. Referee Piotr Michalak stoppage came at the time of 4:58 of round three.