Chris Barnett has landed on the UFC stage with an enormous splash. Whether it’s his surprisingly flashy style, his interviews or his dancing, the 36-year-old heavyweight has grabbed the attention of every fan out there, but if you’re a fan of Tulsa, Oklahoma’s XFN, you saw it coming years ago.

The President of XFN, Dale “Apollo” Cook, knows a thing or two about high-level kickboxing, having competed seemingly since the first sanctioned match. So he had his eye on Barnett at an overseas show and knew the diamond in the rough would be perfect for his eight-man kickboxing tournament.

“When we reached out to kickbox, he said he loved the opportunity to show off his taekwondo,” Cook said. “At that point, I don’t think anybody in the MMA world realized what a gem he was. He wasn’t picking and choosing his fights. I would have loved to have him again, but he took another MMA fight and crushed somebody. It wasn’t too long before the UFC saw his potential.”

In true Barnett fashion, the (maybe) 5’9” fighter drew 6’5” MMA journeyman Tony Lopez in the first round. Barnett gave the exact performance we’re coming to expect from him before giving a celebratory interview and dance that most fight fans know and love today.

Despite the size difference Barnett shocked everybody but Cook when he moved on to the second round and had the entire room going back on what they initially had thought.

“There were a lot of people who looked at him at the weigh-in like, ‘Why are you bringing this fat dude in to fight on UFC FIGHT PASS?’ But I told them all to just wait,” Cook laughed. “I had seen video of him when I think he was fighting for Road FC. He wore that Huggy Bear outfit and he went dancing to the ring. I knew this guy was a crowd pleaser and I knew he was a taekwondo black belt, so I knew what he could do and I knew how much the crowd would love him if he got a chance to go out there and do his dance and stuff.”

Barnett would lose in the semi-finals matchup, but walked away with an entire Midwest city begging for more.

“Even though he didn’t win the tournament because he ran into Jefe Hodges, who was on a mission, there’s no doubt Beastboy won the crowd,” Cook explained. “People, to this day, still talk about his interview and his dance and his ability to kick people in the head, even at 5’9.” 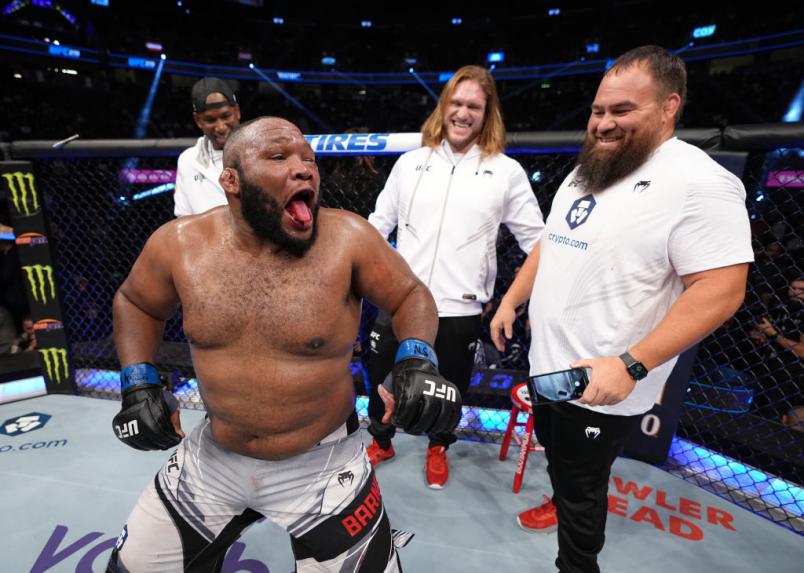 Chris Barnett celebrates with his team after his victory over Jake Collier in a heavyweight fight during the UFC 279 event at T-Mobile Arena on September 10, 2022 in Las Vegas, Nevada. (Photo by Jeff Bottari/Zuffa LLC)

It’s easy to remember a household name’s interview or a post-fight celebration from a double champion in the UFC, but to come into a promotion as a complete unknown to the fanbase and be the talk of the town years later is an accomplishment set for only true entertainers.

Regardless of what’s on the line, Cook remembers Barnett as a fighter’s fighter as much as he’s an entertainer’s entertainer, with as much heart and skill as he has rhythm.

“As much as he wants to win for himself, he really is fighting to entertain. I think you see that with every one of his fights and he’s very outspoken about it in every one of his post-fight interviews,” Cook said. “I think that he would do the same thing if he was fighting in front of ten people in Muskogee, Oklahoma. I just think that’s who he is. He’s an entertainer at heart.”

Barnett isn’t the only notable name to make a stop in the XFN cage, as Jimmy Flick, Bella Mir, Greg Hardy, Kyle Crutchmer and many others have all flashed their skills in Tulsa, Oklahoma, and Cook is proud to say that he’s definitely not the last fighter who will take the UFC by storm.

“I think [Nick] Piccininni has a lot of potential,” Cook said. “He’s at a weight class where there’s not a lot of guys. I think that he might be the next breakout star on the MMA side.”

It won’t be long until XFN delivers another head-turning star. Will it be Piccininni or will another kickboxer to go from 8-main tournament to superstardom?

For all the greatest action in combat sports, sign up TODAY for UFC FIGHT PASS!