Dalcha Lungiambula Is Writing His Own Story

Fresh Off Their First Victories Inside The Octagon, Both Dalcha Lungiambula and Marc-Andre Barriault Will Be Looking To Keep The Momentum Going This Weekend At UFC Fight Night: Brunson vs Till
By E. Spencer Kyte, on Twitter @SpencerKyte • Aug. 31, 2021

Dalcha Lungiambula is a few pages into the third chapter of his mixed martial arts career; a story that continues Saturday night when he squares off with Marc-Andre Barriault at the UFC APEX.

The first chapter took place in South Africa, where the man known simply as “Champion” amassed a 9-1 record and claimed both the EFC light heavyweight and heavyweight titles, defending the former twice before winning the latter in his final bout with the promotion.

Chapter Two began in Minneapolis, Minnesota, where Lungiambula made his UFC debut, registering a third-round stoppage win over Dequan Townsend, and continued five months later when he was felled in Moscow, Russia by rising star Magomed Ankalaev. 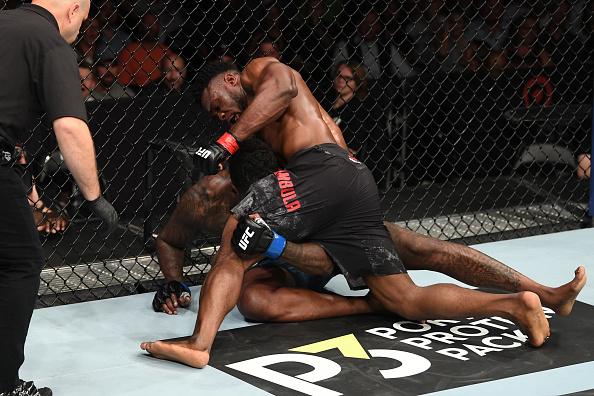 Dalcha Lungiambula of the Democratic Republic of Congo punches Dequan Townsend in their light heavyweight bout during the UFC Fight Night event at the Target Center on June 29, 2019 in Minneapolis, Minnesota. (Photo by Josh Hedges/Zuffa LLC)

Chapter Three commenced in January, with the 36-year-old native of the Congo making his successful middleweight debut with a hard-fought victory over mercurial Brazilian Markus Perez.

“We had the fight get cancelled on us here in Vegas, but he made the weight and then the fight fell off day of the event,” recalled Eric Nicksick, the head coach at Xtreme Couture, where Lungiambula has been training when in the United States. “The good thing for us and for him is that he had the opportunity to do the weight cut, because he was so nervous about making it to 185.”

“Before my loss in Moscow, I could not believe that I could make 185,” said Lungiambula, a compact piece of chiseled granite that looks like he has negative-three-percent body fat and was always right near the divisional limit when competing at light heavyweight.

After having hit the middleweight mark for his scuttled fight with Karl Roberson in December, doing so a month late on Fight Island carried less anxiety, and when everything went smoothly, Lungiambula’s confidence soared and the move because a permanent switch.

Commitment to his craft is not something Lungiambula is lacking, as evident by his reaching out to connect with Nicksick and Dewey Cooper through current heavyweight champion Francis Ngannou. 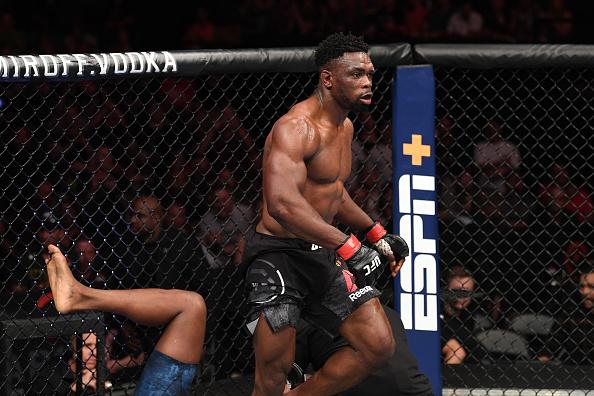 Dalcha Lungiambula of the Democratic Republic of Congo reacts after defeating Dequan Townsend in their light heavyweight bout during the UFC Fight Night event at the Target Center on June 29, 2019 in Minneapolis, Minnesota. (Photo by Josh Hedges/Zuffa LLC

“He reached out to Francis when we fought Junior Dos Santos in Minnesota,” Nicksick said, recalling when the idea of Lungiambula making the trek to Las Vegas was first broached. “He reached out to Francis and asked him, ‘I’d like to start coming out to Vegas, using some of your coaches.’ Francis brought him into the gym and said, ‘Do you have time to help this guy, work with this guy?’ and I was all for it.”

WATCH: The State Of The Heavyweight Division

“That’s why I tried to connect with Francis and he helped me to get a new management team. I asked him before my fight if I could get my camp in America,” continued Lungiambula, who envisions making a permanent move to Las Vegas in order to further build on the skills and improvements he makes each time he travels to the desert fight town.

“I need to improve more,” he said frankly. “I’m here for two months training, but then you go home and you lose everything again until you come here, and it’s quite difficult for me to improve my skills more (doing that). So I need to move here, stay here, and keep improving every day.

“It’s when we’re not getting fights that we need to improve and I need to be here all the time,” he added. “It’s my dream to move over here and reach my goal to be the best in my weight division.” 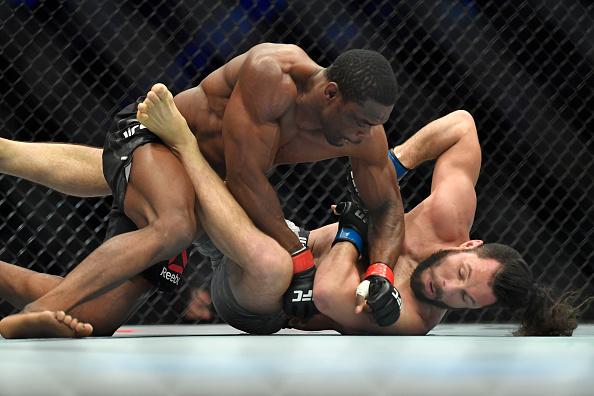 While he looks like an artist’s rendering of what a modern African warrior looks like when he walks to the Octagon, from a technical standpoint, Lungiambula is still incredibly raw, which is not something you typically hear about a fighter with an 11-2 professional record and a pair of victories under the UFC banner.

Prior to arriving on the biggest stage in the sport, Lungiambula was able to succeed thanks to his uncanny blend of power and athleticism, and now that he’s working with Nicksick, the two are trying to bring his technical abilities and understanding of what’s set to transpire to the same level as his rare, natural gifts.

“He’s still very, very raw,” said Nicksick, who has emerged as one of the top coaches in the sport over the last few years. “Usually at this level, we’re not working on having guys extend their cross correctly. If they’re throwing a right cross, it’s a pretty sound technique, but this is a guy in the UFC where we’re trying to make sure his technique is matching his strength.

“When this guy hits, there is no technique behind it and he’ll knock out a mule,” the highly respected Xtreme Couture coach added.

“I’m starting to use my mind,” offered Lungiambula, who won the first two rounds of his fight with Perez on all three scorecards before holding off the hard-charging Brazilian in the third. “I’m getting calm as a fighter. I’m thinking more. I’m not just using my power and going crazy like before.

“I’m starting to understand the fights, to understand my opponents, try to find the gap; things like that, but I need more, more, more time with that,” he continued. “We’re talking about martial arts, man, and there are a lot of things you need to do every day.

“It’s like technology — every day there are improvements, so I need to be there every day, spend more time together so I can be better.” 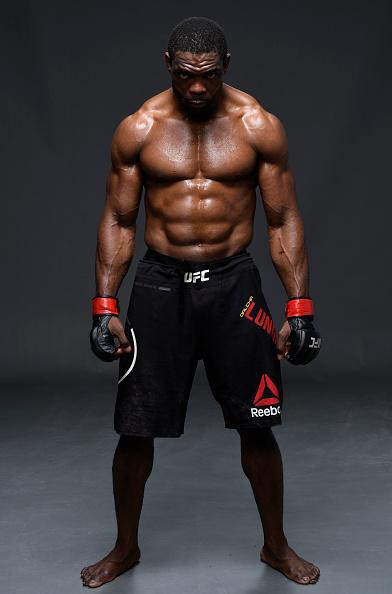 Dalcha Lungiambula of the DRC poses for a portrait after his victory during the UFC Fight Night event at Etihad Arena on UFC Fight Island on January 20, 2021 in Abu Dhabi, United Arab Emirates. (Photo by Mike Roach/Zuffa LLC)

Although Lungiambula still strives for additional improvements and further growth, the initial returns from his shift in divisions and his time training Las Vegas has been nothing but positive, and both he and Nicksick anticipate more of the same in the future, beginning this weekend against Barriault.

The 31-year-old French-Canadian was also a two-division champion on the regional circuit before matriculating to the UFC, claiming gold at middleweight and light heavyweight under the TKO banner. After beginning his UFC tenure with three consecutive losses on the scorecards, Barriault earned stoppages in each of his next two fights, though the first was eventually ruled a no contest.

Sixteen fights into his professional career, the native of Gatineau, Quebec has never been finished, and it’s that resiliency that Nicksick is focused on as he leads his charge into battle on Saturday evening.

“This kid is good and he has cardio,” he began, offering his scouting report on Barriault. “He’s there, and he’s not really going to fade. His losses have all been by decision, and his wins, he’s going into the later rounds.

“We have to apply a good amount of pressure, mix in some wrestling and some takedowns, but you’re going to have to take away his movement and take energy out of him with body shots, because he’s going to be there the whole fight. You’ve really got to chip away at this guy.” 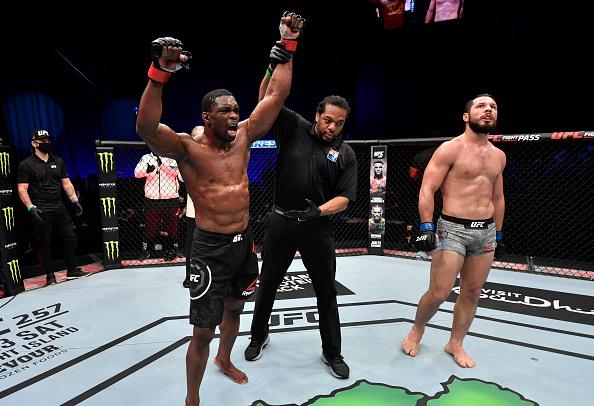 Dalcha Lungiambula of the DRC reacts after his victory over Markus Perez of Brazil in a middleweight fight during the UFC Fight Night event at Etihad Arena on UFC Fight Island on January 20, 2021 in Abu Dhabi, United Arab Emirates. (Photo by Jeff Bottari/

While his coach breaks it down in terms of technique and functional abilities, Lungiambula sees things in more basic terms.

“Marc-Andre can say whatever he wants to say, but in French, there is a saying,” began the UFC middleweight, offering a version of “it’s not the size of the dog in the fight, but the amount of fight in the dog” in hesitant French.

“I’m the true champion. I’m the true warrior,” he added. “I believe I have everything inside of me. I’m born for fighting, so I’ll be the winner and I’ll give a good show.

“I can’t wait for Saturday. I’m ready to give the fans a good show and I’m ready for a win.”