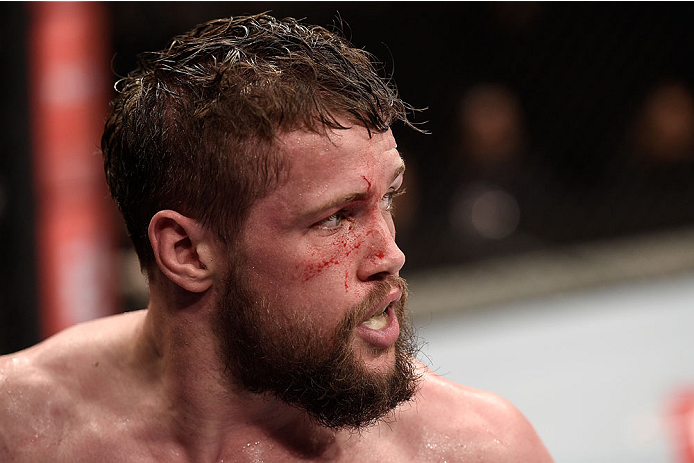 Nicolas Dalby has won each of his 14 professional mixed martial arts fights. One of them was in the UFC. He impressed so much in defeating Elizeu Zaleski dos Santos in that Octagon bout in May that he was matched up with another undefeated welterweight prospect – Darren Till – who he will face in a UFC Fight Night main card bout on Saturday in Dublin.

Any way you slice it, that’s a nice start for a prizefighter. But Dalby isn’t stopping to enjoy the view just yet.

“After this fight maybe, if it goes well,” he laughs before explaining his mindset when it comes to his career. “I’ve always been kind of cautious about feeling comfortable at where I am. When I fought in Cage Warriors, I didn’t like to call myself a champion before I defended the belt one time. I think, more than anything, I have to prove it to myself that this is my place. I think I proved it with that fight (against Zaleski dos Santos), but not completely. I still feel that I haven’t shown off what I do, and I still feel that I have something to prove to the fans.”

If Dalby can put a “1” in the loss column of Liverpool native Till at 3Arena, it would be hard for the 30-year-old Copenhagen product to not give himself at least a little pat on the back. But just a short conversation with the “Sharpshooter” will make it evident that he’s a unique character in his sport, so expect the unexpected from him.

“I think I have a pretty relaxed view on fighting,” he said. “When I step in the cage, all that matters is me, him and the referee. There’s nothing else in the cage, so what’s been said, and records and all that stuff, that kind of fades away. I’m just the person I am and I look at it as a sport. Of course it’s a combat sport and you get hit in the head, but at the same time, for me, I might as well be playing racquetball or curling. (Laughs) It’s still a sport, you have a rule set. The consequences are different, but it’s still a sport to me. Everybody’s got two arms, two legs, and not that I’m underestimating my opponent, but I know what he can do, more or less, and he probably knows what I can do. Now it’s just a matter of going in there and getting to town and finding out who’s the best fighter on the day.”

For such an intriguing matchup between two unbeaten welterweight prospects with star potential, Dalby is quite low key about it, though that might have something to do with this interview taking place on October 12, twelve days away from the fight, but still with some more training camp left to finish. At the time, Dalby was settling in after a long day at the gym and cooking his dinner, and it was getting to the point where he was starting to get a little antsy for the opening bell to ring.

“My body aches and my mind is kind of battered from being in training camp for eight weeks,” he said. “But at the same time, I feel very focused, so now I’m almost getting excited about stepping into the cage and finally doing what I’ve been training to do.”

But was he hearing the buzz about his showdown with Till?

“To be honest, no,” he laughed. “I haven’t really felt any more attention or hype or anything like that compared to my last fight.”

Well, it’s there, because it’s one of those crossroads matchups that rarely take place this early in a prospect’s career. In boxing, the goal would be for a bout between two rising stars to “marinate,” often never to come to fruition. In the UFC, there are no easy fights, and this is proof of it. But when asked about the “0” at the end of his record and that of Till’s, Dalby says he doesn’t pay much attention to such matters.

“When I’m in the cage, the record doesn’t matter,” he said. “My opponent is who he is, no matter how his record looks. If Darren was 15-5, he’s still the same fighter. Of course, there will be some tape to look at how he may have lost some earlier fights if he lost them, but what he does in the cage doesn’t really change if his record is undefeated or not. So when I look at a fight, I always look at the record, but it’s what the person does when he fights that really matters. Everybody has holes in their game - I do as well - so it’s about trying to find those holes and see how my game compliments their weaknesses.”

That thinking man’s approach to the sport is similar to that of the last Dane to make his name in the UFC – former middleweight and welterweight contender Martin Kampmann. Since “The Hitman” was doing his thing in the Octagon, no one from Denmark has emerged until Dalby’s debut earlier this year. He says that there are some quality fighters who should be on the UFC’s radar soon, but as for his own move to the big show, he chalks it up to the simple fact of being able to stay busy and show his wares.

“Danish MMA isn’t that big, and the pro fighters we’ve had haven’t been consistent in having fights,” he said. “For some reason, I’ve just been lucky to be consistent and fighting all the time. I haven’t been fighting four fights a year as I did at the start of my career, but I’ve had between two and four fights since I’ve turned pro, so I think that consistency and winning all the fights has helped me come to the UFC.”

Call it a work in progress for Danish MMA, with Dalby leading the way. But no, it’s not up to Conor McGregor-levels of attention at home for him at the moment.

“I get a little bit of attention, but it’s only right before and right after fights,” he said. “In between it’s the same.”

So hold off on calling him “The Notorious” Nicolas Dalby just yet. “Sharpshooter” is fine for now.

“The Danes aren’t as fight crazy as the Irish,” he laughs. “And I’m still trying to find which side of my personality I can enhance that can hype the fights more. I’m working on that and trying to get there. Hopefully, I’ll be able to make it even more exciting for the fans in the future.”