Dad's Lessons are Paying Off for Justin Lawrence

"I haven’t done much. Honestly, I had a good fight, that’s it. So I just gotta stay focused, keep grinding, and keep on my toes." - Justin Lawrence 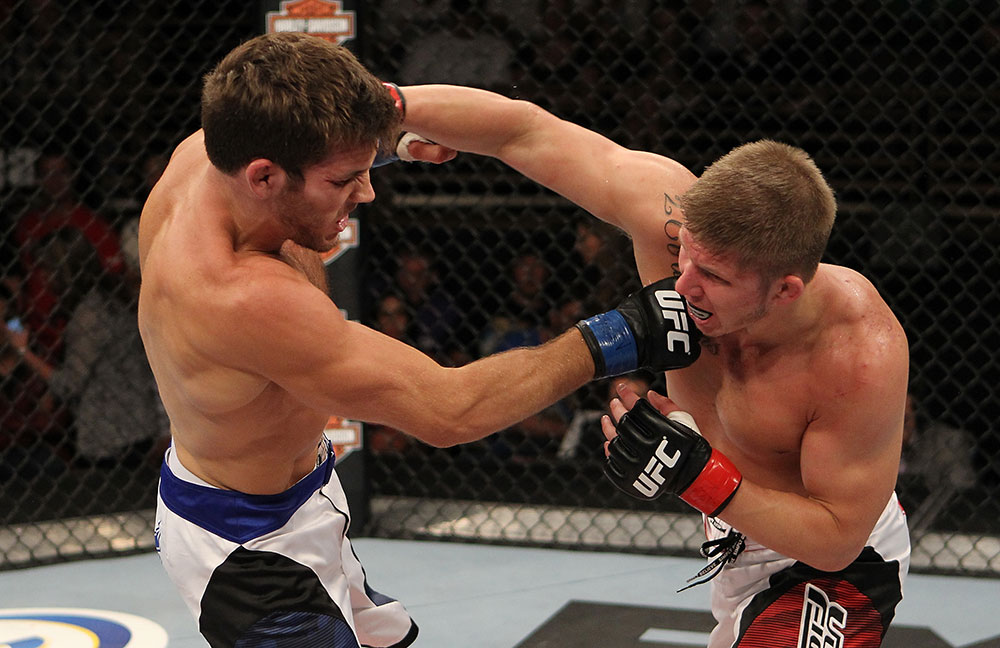 It was a couple weeks early, but Benny Voyles couldn’t have asked for a better Father’s Day gift. His son, Justin Lawrence, came off the Ultimate Fighter’s 15th season, won his first UFC fight via third round knockout over John Cofer, and picked up two bonuses for his efforts: Fight of the Night and KO of the Night.

Yet as the win sunk in for the 22-year old from Pacific, Missouri, the win wasn’t just the perfect way to kick off a UFC career, but a realization that everything his father taught him and put him through in their gym over the years was for a reason. And “The American Kidd” couldn’t have been more thankful.

“I trained so much through high school,” said Lawrence, who actually began training in combat sports at the age of six. “I didn’t party in high school, my dad was super strict, and back then, I was really upset.”

The pleas were the usual ones from a teenager.

“Why can’t I go out with my buddies?”

“The girls will come,” responded Voyles.

“That’s what he always said,” laughed Lawrence in the days leading up to his featherweight debut in the Octagon this Saturday night against fellow prospect Max Holloway. “I never realized it until now that I’m 22 and fighting in the UFC, and I look back at those four years of high school, and I could have gotten in a lot of trouble, but he was super strict on me and he kept me grounded. When that was happening, I hated it. I look back now and I see all my buddies and I say, man, I’m glad I had a good dad that kept me grounded and kept me structured, and kept me into it. And that’s the thing – he never really burned me out. There are a lot of guys that start out at the age of six and a lot of those dads push them really hard. My dad pushed me very hard, but he didn’t burn me out, and that’s the key. I was extremely blessed, I really was.”

You would be hard pressed to think of a better situation for Lawrence to be in. Sure, he’s only 4-0 as a pro mixed martial artist, but before making the leap into the pro game, he was a high school wrestler, a two-time Golden Gloves champion, and a six-time IKF national kickboxing champ with over 150 amateur bouts. This experience was evident when he stepped into the TUF house earlier this year, and even though he barely made it into the competition with three fights, “you never would have known,” he says, and he’s right. Beating veterans James Krause and Cristiano Marcello is serious business, and though he lost to eventual show winner Mike Chiesa, having a lesson-filled loss that doesn’t count on your official record is pretty much the only way to fly.

But back to the original premise, which is that despite his record, he’s got a lot more experience than anyone with a similar slate, and perhaps even more than many of his more-seasoned UFC peers.

“The amateur experience is huge,” said Lawrence, whose work with the renowned BlackHouse team (home of Anderson Silva) is pretty impressive for the resume as well. “You can’t put a number or can’t explain how important the amateur experience is. I’ve been there, I’ve trained hard my entire life, I’ve been in over 150 amateur fights and there’s nothing better. They say if you want to be a great wrestler, you gotta have that mat time, and if you want to be a good boxer, you have to have that ring time. Sparring is great. God knows how many rounds I’ve sparred and hit the mitts. But until you’re actually out on the stage and out in a fight, there’s nothing like it. And when you have numerous amateur fights, it makes you feel so poised and so comfortable inside the cage or ring. And that’s huge. This is second nature to me. A guy can start now at 22, and he’ll never have as much experience as I have. I had no responsibility; all I had to do was go to a gym and train. At 22, you’re a grown man – you’ve got responsibilities, you got bills to pay, you have a full-time job if you’re not making money as a fighter, and that’s huge.”

You can tell that there’s a maturity to Lawrence that goes hand in hand with his youthful enthusiasm to scrap. It makes him a compelling prospect in a tough division, but after being in the nation’s collective living room for the 13 weeks of TUF and then delivering one of the most bonus-decorated debuts ever, he keeps a cool head.

“I haven’t even really sat down and thought about it,” he said of the hype surrounding him. “I get so lost in my training, and that keeps me focused. I work hard every day and I don’t pat myself on the back too much. Those (the bonuses) are all great things, but I’m at the bottom of this pyramid still. I haven’t done much. Honestly, I had a good fight, that’s it. So I just gotta stay focused, keep grinding, and keep on my toes.”

And Holloway’s likely the kind of fighter to keep him on those toes. The youngest fighter currently on the UFC roster at 20, Holloway also has a mature outlook on things, likely developed by already being a husband and father. In the Octagon, he’s shown glimpses of top-level skills, and while still raw, he has the talent to give anyone a run for their money.

“He’s young, he’s hungry, and he wants the goal that I want,” said Lawrence of Holloway. “He’s very talented, he’s got good striking, good shot defense, but I think I’m the more well-rounded fighter, I think I’m gonna be a little bit bigger, and I think I’m gonna hit a little harder. He does a good job at keeping people at his range, but he hasn’t fought a kickboxer like me. That’s the key. My kicks are gonna set up everything in this fight, and that’s the plan.”

What about the bonuses? Do they factor in to this master plan?

“I just go out there and try to put on a great performance,” he said. “That’s my goal. Getting a Fight of the Night and Knockout of the Night was great for my UFC debut, but that’s the goal every time I go out there, just to put on a great show for the fans. I fight for the fans and if I can put the fans in the seats, that’s the best thing for me and that’s how I keep my job.”

Looks like Justin Lawrence will remain gainfully employed for a while.