Daddy Duane Ludwig Gets Back to Work

"I definitely need fighting, I need to teach, and it gives me life, for sure.” - Duane Ludwig 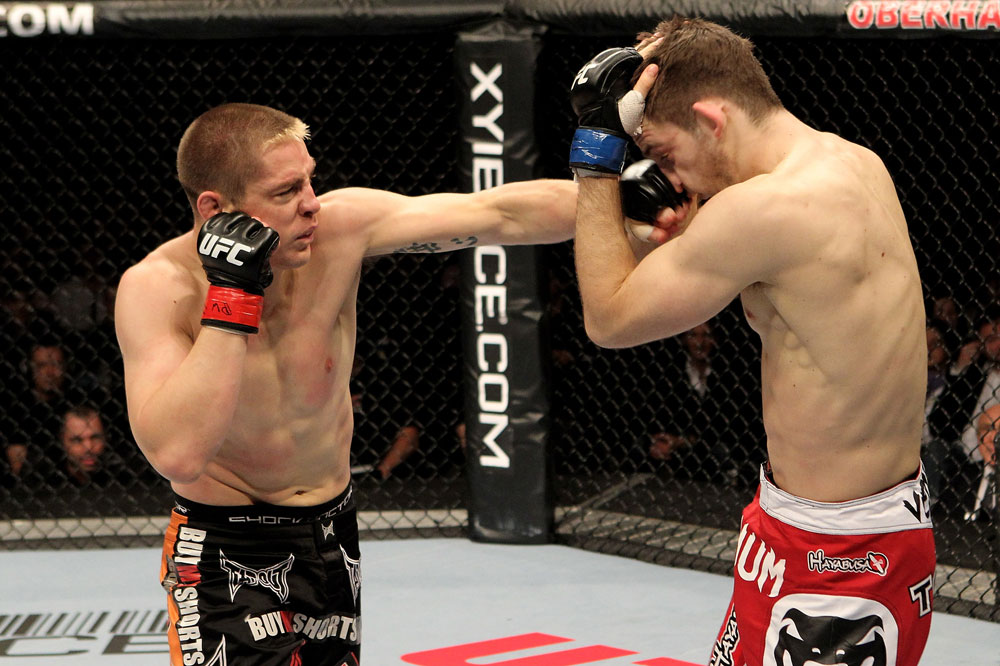 At this level of mixed martial arts, every fight is important, and every win even more so. But Duane Ludwig’s UFC 122 bout against Nick Osipczak had even more hanging on the outcome.

Back from a series of injuries that kept him sidelined for eight months, Ludwig was testing his body out on the sport’s biggest stage, returning to welterweight, and doing it while trying to snap a two fight losing streak. But there was more, as his son, Duane Jr., was born just days before he stepped into the Octagon in Oberhausen, Germany.

If that’s not enough to cause you to crumble mentally, if not physically, I don’t know what is. But that’s why we leave the fighting to guys like Ludwig, and with the pressure on, he came up big, winning a hard-fought split decision over Osipczak to resurrect his career and go home with a story he and his son will get a kick out of one day.

“The last fight was a big fight for me,” said Ludwig, now 28-11. “Obviously coming off the injury and moving up to ’70 and just getting the win. My wife had to stay home because she was pregnant and she gave birth to our little boy days before the fight, so it was special to me to make sure I won. It’s tough to tell your kid I was gone when you were born, but if I would have lost my fight, that would have sucked. (Laughs) So I was definitely happy as can be when I won the fight. It was a special moment.”

It won’t be the last for Ludwig, who also has a daughter with his wife Jessica. And even if he did lose to Osipczak, you get the idea that little “Bang” wouldn’t be too upset considering that dad does have one of the coolest action figure collections around. Yes, Ludwig is a collector.

“I’ve been collecting about nine years, when I first went to Japan in 2002,” he said. “I went to the PRIDE when Don Frye fought Ken Shamrock (PRIDE 19) and they had a bunch of toys. They had action figures of people I actually know, so I just started collecting them then.”

Fans who follow Ludwig on Twitter @DUANEBANGCOM have seen some of his collection over the last few months, including the “Rampage” Jackson figure he got signed at the recent UFC 135 press conference in his home city of Denver. But the crown jewel of the collection?

“Probably my signed Fedor (Emelianenko) HAO toy,” he said. “It’s either that or my (Mirko) Cro Cop one, which I got signed too. But Fedor’s definitely a rare one.”

It’s actually a cool thing to hear that one of the sport’s top fighters is still a fan, willing to not only collect merchandise but to get it autographed as well. Just don’t tell him to open his figures.

Ludwig’s collecting shows off his love of the game, but that’s something that’s been evident to anyone who has known him over the years.

“It’s in the blood for sure,” said the 33-year old, who began training in Thai boxing at the age of 15 and hasn’t stopped since. “I’ve wanted to be a fighter since I was a child, and every day is a learning process to help find out who you are while presenting yourself with different challenges and having fun. It’s definitely an exciting thing. There were a few times when I wanted to step away from fighting, and when I did, it wasn’t a good life for me. So I definitely need fighting, I need to teach, and it gives me life, for sure.”

That’s not to say it’s all been smooth sailing. An accomplished kickboxer, Ludwig also competed in MMA from 2000 on, and he’s had his share of ups and downs in the win-loss column like any fighter. But in 2009, his body started fighting back after years of training; either that or just being in the wrong place at the wrong time.

“These last two years have been rough,” said Ludwig in a huge understatement. “Before I fought (Darren) Elkins (in March of 2010), I actually completely broke my jaw in training before I got back into the UFC. I broke it in September and I fought in December (against Ryan Roberts). I wasn’t supposed to, but I fought anyway and I lucked out because I didn’t really get hit. Then the UFC called for me to fight Jim Miller and my jaw still wasn’t healed, so I was advised not to fight, but I took the fight any way to get back in the UFC. Then I broke my ankle (against Elkins), so it was definitely a challenging time – mentally, physically, financially, everything. But like I said, this gives me life. I learned a lot of lessons from it, and I got to spend a lot of time with my family, which was nice even though I wasn’t a hundred percent healthy, and everything worked out for the better. Part of that also was fighting at 155. I was always breaking my body down and always training, so my body was always getting injured pretty easily. Once I went up to 170, I felt a lot better. I could eat what I want and when I trained, I felt strong.”

He wasn’t done hitting the injured reserve though. In the Osipczak fight he broke his right thumb, and when that was done healing he injured his sternum in what he calls a “freak accident” that forced him out of a March 2011 bout with Amir Sadollah.

So it was back to the sidelines. But today – knock wood – Ludwig is healthy, he’s in Milwaukee, and he’s gearing up for the better late than never meeting with Sadollah this Sunday. It’s a fight he can’t wait for.

“I’ve had a lot of time to prepare mentally and physically for him,” he said. “It’s a good fight and I feel like I have a good gameplan lined up for sure. Amir is a very good kickboxer who’s good off his back. He’s not worried about getting taken down because he’s good with armbars and triangles. He’s very confident with his kicks, punches, and knees and he doesn’t hesitate because, again, he doesn’t worry about being on his back. I’ve been watching him since Day One on The Ultimate Fighter and in his fights in two ways – one as an opponent and one as a style to emulate. So I’ve been watching him for a while and I’m a fan of Amir. If had an action figure I’d have that one too. (Laughs) It’s gonna be a good fight, I think we match up well, and I’m happy it’s happening.”

After everything that has happened since the Osipczak fight, he’s probably happy any fight is happening. Then again, that’s the way Ludwig always feels when he gets a chance to perform his art.