I’m willing to bet that years from now, the matchup this Saturday between Da-un Jung and Kennedy Nzechukwu will be seen as the turning point for one of the two men…and perhaps both.

In the positively hostile landscape of the light heavyweight division, both men have made a habit of winning lately. And following their prelim-opening clash at UFC Fight Night: Holloway vs Rodriguez, the victor will certainly move onto bigger and better things, namely ranked opponents.  MMA historians could point to this matchup as the beginning of a reign.

“Absolutely,” Jung agrees of my assessment. “I'm on a streak, he's on a streak, and I'd rather face tough guys that move me closer to the top than anyone who isn't a contender. One step at a time, I'm looking to make my way I to the top 15 ranking.”

Undefeated through his first four UFC appearances, the South Korean standout has showcased a well-rounded skillset in his tenure, featuring a guillotine submission vs Khadis Ibragimov, a KO vs Mike Rodriguez and insane durability in both his split draw against Sam Alvey and his most recent unanimous decision win over William Knight.

Though his overall 14-2-1 pro career is a parade of finishes (only three of those bouts went to the scorecards), it may bet hat durability—his cardio, his comfort in his 6’4” frame and his scary ability to eat a punch—that make Jung such a danger. He’ll lean on it Saturday vs Nzechukwu.

Of course he’ll have his eyes open for the finish opportunity, but a sober game plan is essential against the high-flying Nzechukwu. The Fortis MMA product and Dana White’s Contender Series alum is on a three fight tear that includes highlight reel knockouts in his last two.

Jung knows it won’t exactly be light lifting on Saturday, and in expecting next-level talent following his win over Knight last April, he didn’t spend a minute celebrating, relaxing or vacationing.

“Nothing,” he confirms. “I went right back to training.” 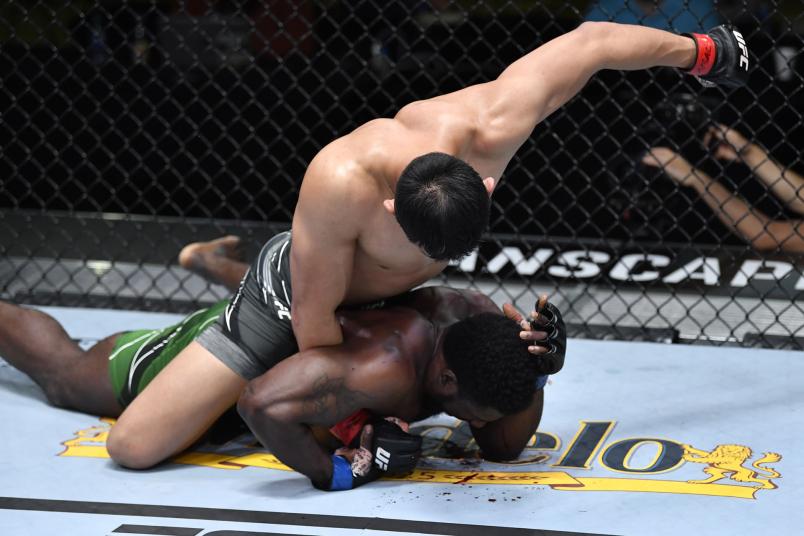 And then right back to Vegas. From Korea.

“Flying always sucks,” laughs the 27 year-old.  “But the UFC hooked us up with good flights. Adjusting to jetlag has been easier and the weight cut is going well.”

He even had time to watch UFC 268 on television last Saturday.

“Chandler and Gaehtje stole the show,” she says excitedly, echoing the sentiments of nearly everyone who saw the event. 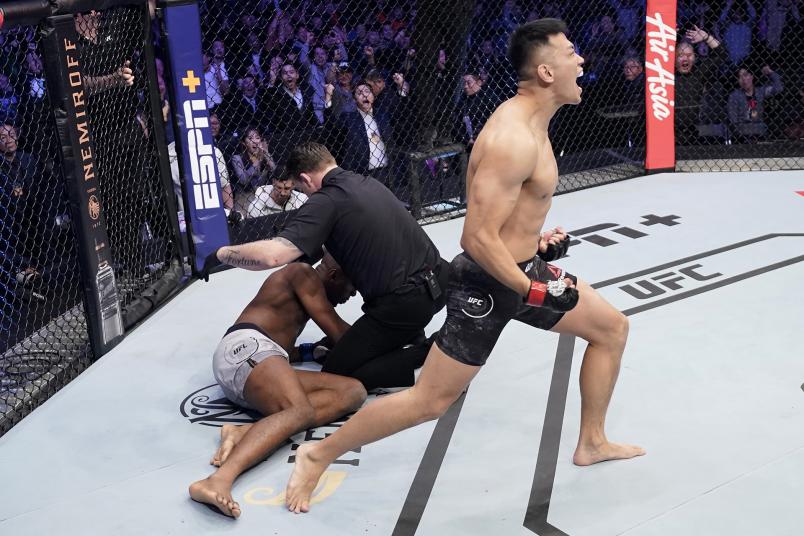 Da-un Jung of South Korea celebrates after knocking out Mike Rodriguez in their light heavyweight fight during the UFC Fight Night event at Sajik Arena 3 on December 21, 2019 in Busan, South Korea. (Photo by Jeff Bottari/Zuffa LLC)

Now it’s his turn to steal the show, and the matchup certainly lends itself to those potential fireworks. But he admits the energy in the UFC Apex could make it a little extra challenging. A great venue, yes, but not exactly the roaring crowd of a capacity Madison Square Garden.

“The crowd gives me such good energy I hate fighting without them,” he admits.

“But a fight is a fight,” he cautions. “And my performance will be the same whether its one person watching or a million people are watching.”