“I'm so happy! I'm more motivated than ever!”

South Korea’s Da-un Jung is beaming at the mention of his newborn son, who ushered him into the legion of first-time UFC parents. And while other fighters have reported how it changed their habits in practice or in the Octagon, Jung notes that it has simply changed his entire calculus.

“Everything is generally the same,” he explains via interpreter, “I just have my family to think about before making any big decisions.”

One of those decisions, of course, is a bit of a no-brainer: continuing his promising ascent in the light heavyweight division, where he remains unbeaten in three UFC appearances. His first two fights in the promotion yielded impressive finishes over Mike Rodriguez and Khadis Ibragimov. It was the third, however—a split draw against Sam Alvey—that taught him the most.

“I learned how difficult a crafty veteran could be. I also learned to be patient and not force the knockout.”

Knockouts are Jung’s bread and butter. Over the course of 13 professional wins, 10 opponents have had their nights ended by KO. But with the benefit of hindsight and film, he concedes he would approach the Alvey fight differently today.

“I would have wrestled more in the fight. I would have also been more of an outside fighter and draw him into exchanges and then look to counter.”

He’ll carry those valuable lessons into Saturday’s prelim contest at UFC Fight Night: Vettori vs Holland, one of those bouts that almost didn’t happen. It was one of those aberrations that has become commonplace in scheduling fights during the pandemic era. Visa issues nixed his bout with Shamil Gamzatov scheduled for this Saturday. But he found a replacement in William Knight, whose UFC 260 bout had just been scrapped due to COVID protocols. It’s a lot of moving parts these days, but Jung is just rolling with it.

“It would be a bigger deal to me if the date got changed, but fortunately that didn't happen.”

Sure, the date stays the same, but now instead of facing a noted BJJ and submission specialist, he’ll face a swift power-puncher with only one pro loss.

“A new opponent always means a change in strategy,” he explains, seemingly unfazed. “We trained hard, as always, and just focused on different tactics with the change of opponent. He's very strong but beatable. I think I'm the overall better fighter and I'll show it come Saturday.” 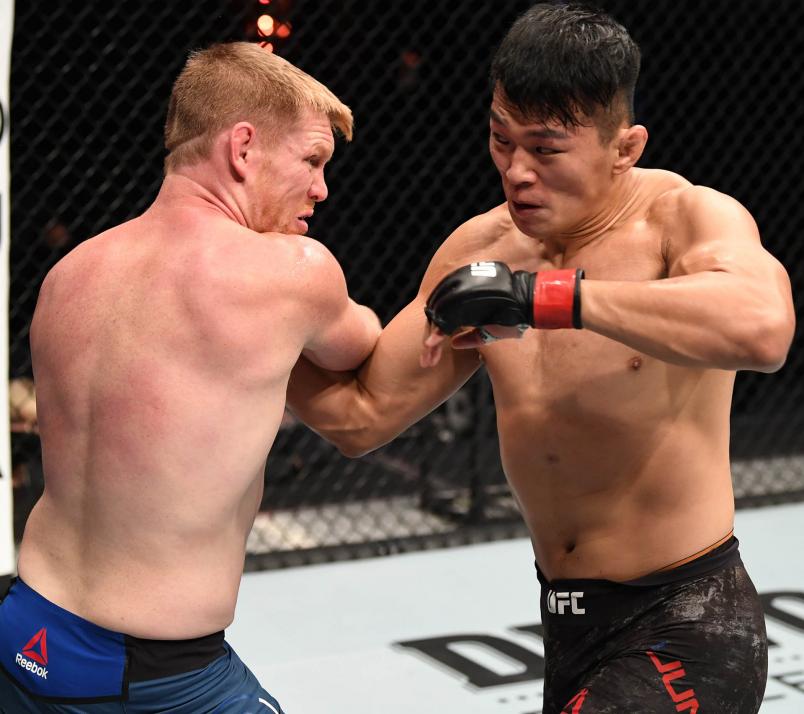 Despite a similarity in how they handle their business, Jung believes his overall game is more refined, and it’s in the details that he’ll find his opening.

“I see my footwork and speed being too much for him. That will cause him to over commit and make mistakes, mistakes on which I'll capitalize for the finish.”

A win on Saturday will have Jung sitting pretty and ready to take a step up in a brutally-tough division. He also hopes he’ll be celebrating the near-end of the pandemic era. But it’s not the free movement or even the roar of the crowds he’s pining for.

“I would like to fight without having to be in lockdown beforehand,” he laughs. “I don't really care about traveling for fun, but having a smooth fight week again would be awesome.”