Da Silva gets another finish, Fili back in win column

Brazilian knockout artist Henrique da Silva showed off some new wrinkles to his game in his Saturday bout against Octagon newcomer Joachim Christensen, as he survived a second-round knockdown to submit the Danish light heavyweight later in the same frame at Moda Center in Portland. 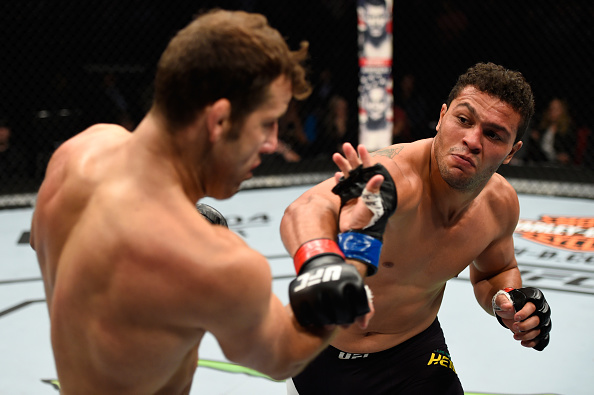 Christensen acquitted himself well in the opening round, but it was still da Silva’s frame, as he stalked and landed several hard shots, most notably a right hand the floored Christensen in the third minute. But after more punishing back and forth action in the second that marked up both men, a left knee to the jaw allowed Christensen to even the score. Da Silva recovered quickly from the knockdown, but the Copenhagen native didn’t allow his foe to rise. Instead, Christensen fired off strikes from the top position. Da Silva was eventually able to reverse position in the final minute, and after a brief stay in the mount, the Brazilian locked in an armbar that forced Christensen to tap out. The official time was 4:43.

Andre Fili made a statement in his featherweight bout with No. 12-ranked Hacran Dias, as he came in on short notice and pounded out a three-round unanimous decision victory.

Fili got after Dias as soon as referee Dan Miragliotta waved the two into action, and after rocking the Brazilian early, Fili dropped Dias and nearly finished him before the veteran jiu-jitsu black belt was able to lock on the Californian and take him down. With two minutes left, Fili escaped back to his feet, but he wasn’t able to get Dias in trouble again.

Dias didn’t hide his intention to get the fight back to the mat, and in the second minute of round two, he got his wish. Fili didn’t stay grounded long, and when Dias did put the fight back on the mat, Fili made sure he got on the top position before escaping to his feet once more and punctuating the round with a throw of Dias.

After eluding more Dias takedown attempts in round three, Fili did get grounded twice, and the crowd wasn’t happy about it, but they did roar when Fili reversed position in the final minute and fired off bad intentioned ground strikes. 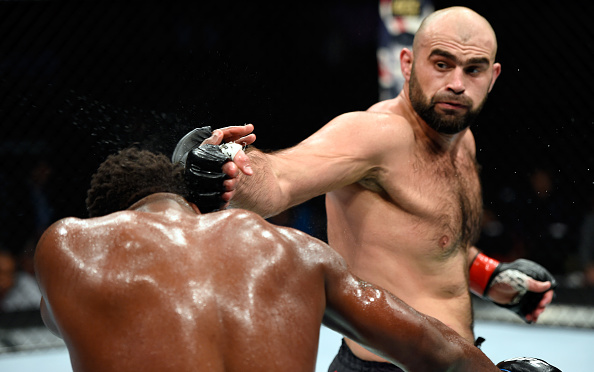 Getting the takedown in the second minute of round two, Abdurakhimov tried to keep his foe grounded, but Harris wasn’t sticking around long, and he wouldn’t hit the deck for the rest of the round, as he kept his opponent at bay with his striking and solid takedown defense.

The second saw Abdurakhimov begin to land more shots while Harris nearly sunk in a choke, but neither fighter was able to propel themselves into a significant lead. Yet despite the closeness of the bout, neither was able to kick it into another gear with the fight on the line in the third round, and the crowd let the combatants know that they weren’t happy with that turn of events.

Welterweight prospect Elizeu Zaleski Dos Santos was put in some bad positions by veteran Keita Nakamura, but the Brazilian kept fighting every minute of every round on his way to a close, but unanimous, decision win.

Dos Santos began his offensive attack with a kick to the head, prompting Nakamura to immediately seek – and get a takedown. Dos Santos returned to his feet, but when the two went to the mat a second time, this time “K-Taro” took his back. After a brief attempt at a rear naked choke, the two scrambled but Nakamura stayed in control until the final 30 seconds, when the Brazilian got free and let his hands go until the end of the round.

Keeping Nakamura within his punching range for the early part of round two, Dos Santos had success, but soon enough, the Tokyo product was able to get the Brazilian to the mat once more for a solid spell. Dos Santos kept moving, and he eventually shot to his feet, where he drilled Nakamura with hard shots until the horn.

The two traded takedowns in round three, with Dos Santos’ suplex of Nakamura doing quite a bit more damage, as he nearly pulled off an arm triangle. But when Nakamura got some daylight, he scrambled and took the Brazilian’s back, only to see Dos Santos get free and end the round with a bunch of hard head strikes.