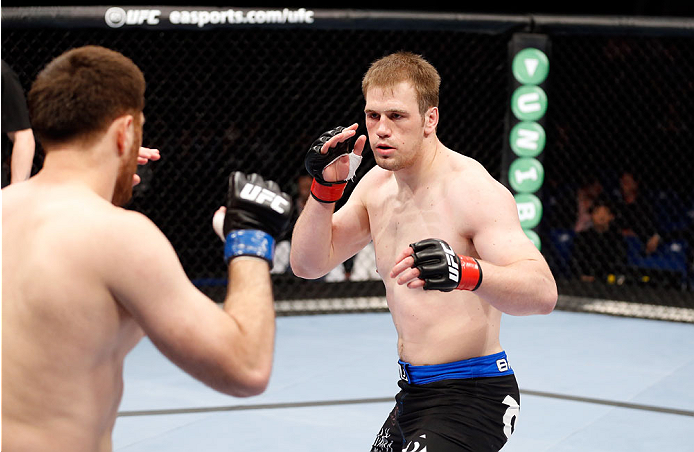 For a young fighter, leaving a stable career path to pursue mixed martial arts takes courage, particularly when you have to break the news to your parents.

This has been true for the Czech Republic’s Viktor Pesta, who fights Konstantin Erokhin this Saturday at UFC Fight Night: Gustafsson vs Johnson in Stockholm, Sweden at the 30,000 capacity Tele2 Arena. Even though he’s reached the highest level of MMA, the heavyweight fighter’s parents would still rather see him in school.

“Well they (my parents) actually didn’t know what the UFC is. They realize now that it’s a pretty big thing, and they support me now, but still they think I should do school,” Pesta, who studied at the Police Academy prior to pursuing MMA, said. “Because in my family we don’t appreciate athletes (much); we appreciate more knowledge and studying and this stuff. I have three brothers and all of them study in university, and I’m the only outlaw.”

It was the endless technical permutations possible in a fight that attracted Pesta, who holds a 9-1 record, to the sport of MMA.

“I love that it’s a complete sport. There are so many techniques you can use, so many ways to win and lose, and it’s not about violence. I’m just a fan of being able to perform in so many different ways, that’s what I like about it.”

In addition to breaking the mold among his siblings, Pesta is currently the only fighter from the Czech Republic in the UFC. And while he considers himself a representative of the central European nation, he still views mixed martial arts as a fundamentally individual sport.

“Because I’m the only fighter from Czech Republic in the UFC right now, I kind of consider myself a representative, but I don’t consider it like competing of nations, I think it’s a competition of individuals.”

The relatively low level of mixed martial arts in the Czech Republic has led Pesta to train abroad. While he is still based at Prague’s Penta gym, the 24-year-old now trains alongside Alexander Gustafsson in both Sweden and at San Diego’s Alliance MMA.

Training alongside elite UFC fighters has been a confidence-building experience for the young fighter, who lost his UFC debut by unanimous decision against Ruslan Magomedov in May of 2014.

Pesta faces a big test in knockout puncher Erokhin. The Russian heavyweight is on a nine-fight winning streak that includes victories over notables like Brett Rogers and Rameau Thierry Sokoudjou.

“He’s tough. He has big striking power, that’s for sure. But I think his game is not really complete and I think his opponents have made some mistakes that I’m not going to do, so I think it will be fine.”

While Erokhin is known for his punching power, Pesta has developed a reputation of his own. Pesta has finished a number of opponents from the mounted crucifix, a position also used to great effect by UFC legend Matt Hughes.

“It was just one of many techniques I knew, it started to work in my fights. I won a couple of fights with the crucifix and I didn’t even plan on it, so later it became my favorite move, but it wasn’t intentional. It wasn’t like somebody showed it to me and I’m like ‘oh man, that’s cool, I have to do it.’ It was just one technique of many, and I started to do it in fights. I realized after some fights I won with this technique thay it fits me well.”

Pesta remains tight-lipped about the details of his game plan for Erokhin. But he won’t rule out a victory by mounted crucifix or “Bába pod kořenem.”

“Well, it’s possible of course. But it’s difficult to say. I will not tell you a specific prediction because it’s kind of part of my game plan, but I can tell you that I will win.”