From The Ups And Downs Of Her Career, Cynthia Calvillo Knows She Is A Better Fighter Than Ever Heading Into UFC Fight Night: Vera vs Cruz
By Maddyn Johnstone-Thomas • Aug. 10, 2022

As she enters her 12th fight in the UFC, Cynthia Calvillo understands that the fight game isn’t always pretty. She knows that in order to reach the top and become champion, you have to face trials and tribulations.

“Losing is not easy, but I also know it’s a part of success,” Calvillo said ahead of her bout at UFC Fight Night: Vera vs Cruz. “From what I’ve learned and what I’ve seen, there’s actually more failure than there is success, and a lot of people see success, but it takes a lot of failure to get there.”

The flyweight is looking to get back on track in her fight against Nina Nunes on Saturday after dropping three in a row to Katlyn Chookagian, Jessica Andrade and, most recently, Andrea Lee. 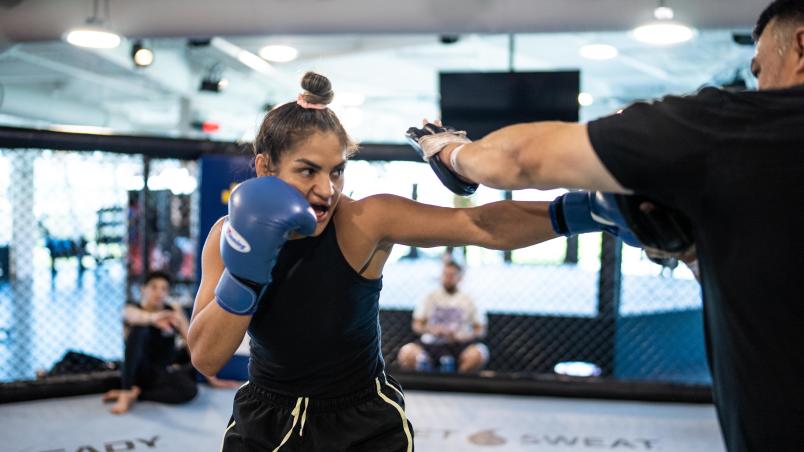 UFC fighter Cynthia Calvillo training at the PI with boxing coach Jorge Capetillo and Brandon Moreno for her fight on July 9. (Photo by Juan Cardenas/Zuffa LLC)

Even through the struggles that Calvillo has faced in her career, she feels that it is all happening for a reason and there’s only good things coming her way now.

“It makes me mentally stronger and I’m so excited to go out there and show how much I’ve evolved, not just physically, but mentally, as well,” Calvillo said. “There’s nothing like losing to really test you to see if this is what you want to do. And this is what I want to do. I want to be the world champion of the UFC. There’s nothing that is going to stop me. Even if I have to fall down a couple times, I’m going to dust myself off and keep going.”

The 34-year-old has been training in Las Vegas for almost two years now and it has made all the difference for her and her preparation leading up to a fight. Even if she hasn’t come out with the result she had hoped for, Calvillo is thankful for the UFC Performance Institute, which makes sure she is able to perform at her best every time she steps into the Octagon. 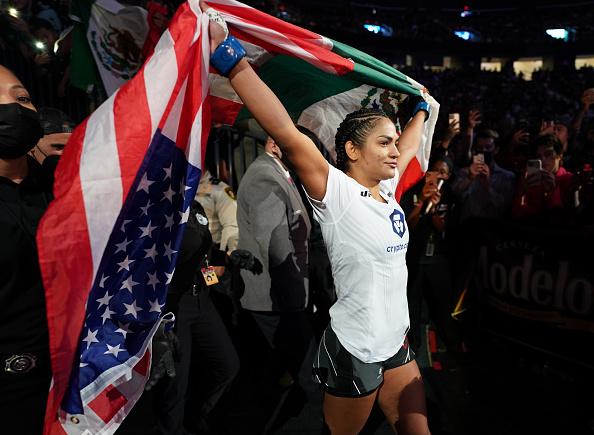 Cynthia Calvillo walks to the Octagon during the UFC 266 event on September 25, 2021 in Las Vegas, Nevada. (Photo by Cooper Neill/Zuffa LLC)

Heading into this bout against Nunes, Calvillo is feeling a range of emotions.

“I have all of the feelings that you could possibly get before fighting and I’m really stoked,” Calvillo said. “I had a rough last couple of fights, and I’ve been chipping at it and in the lab just working hard and becoming the best version of myself. I think I’m just that: I’m the best I’ve ever been.”

Nunes has been competing in the UFC since 2014 and is also hoping to get things turned around after suffering losses to Tatiana Suarez and Mackenzie Dern. With an overall record of 10-7, Calvillo isn’t taking her opponent lightly and knows everyone you compete with at this level is top-notch.

However, when she views the matchup, Calvillo knows where her advantages come into play. 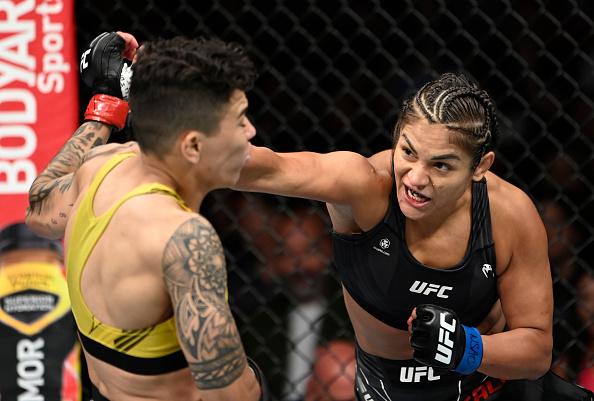 Cynthia Calvillo punches Jessica Andrade of Brazil in their flyweight fight during the UFC 266 event on September 25, 2021 in Las Vegas, Nevada. (Photo by Jeff Bottari/Zuffa LLC)

“I feel like stylistically it might be a bad matchup for her,” Calvillo said. “I think she’s going to try to stick and move. I feel like I’m going to be able to use my boxing in there and get the takedowns and break her once we get to the ground. That’s where I see the fight going. No disrespect to her, but we have a job to do and it’s going to be a bad night for her.”

The California native is as hungry as ever to make that walk to the Octagon on Saturday night. She is eager to put on a show for everyone. However, one thing is different for Calvillo this time around.

“When I go in there and I want to prove to people, like, ‘Hey you lose, you take losses, but you keep fighting and you can still be the best in the world,’” Calvillo said. “That’s my new purpose. Now I want to be a hero for everybody. I want to go out there and show them that you can fall down, dust yourself off and keep going. That’s what I want to prove to everyone.