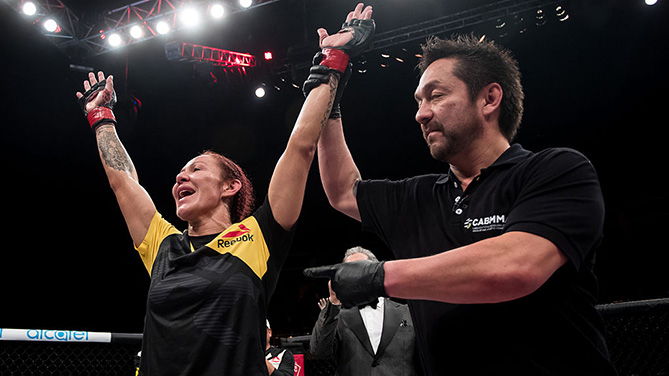 In her UFC Fight Night main event against Lina Lansberg Saturday night, dominant Brazilian bomber Cris “Cyborg” Justino was forced out of the first round for the first time since 2013, but the end result was still the same, as Cyborg scored a second-round stoppage of the Swedish newcomer at Ginasio Nilson Nelson in Brasilia to run her current unbeaten streak to 17.

“She had good Muay Thai and I know that she wanted to keep the fight standing, so I took her to the ground and showed a little ground work,” Cyborg, the Invicta FC featherweight champion said.

The bout was contested at a catchweight of 140 pounds.

Cyborg wasted no time closing the distance and getting the fight against the fence, and she easily muscled her foe around as she landed knees at close range. Around two minutes in, Cyborg pushed off and landed some hard strikes before the two clinched again. With 2:05 remaining, referee Mario Yamasaki restarted the action, but both wound up locked up seconds later. This time, Cyborg slammed Lansberg to the mat and got into the mount position. After eating a few shots, Lansberg rose, but she couldn’t break the grip of the Curitiba native, who finished off the round with a barrage of shots that bloodied Lansberg’s nose.

Lansberg attempted to use her movement to kick off round two, but Cyborg had no difficulty getting in striking range, and she fired off a series of punches and kicks. A clinch ensued, and then Cyborg got the takedown again. The ground assault continued, and Yamasaki was watching closely. Finally, another unanswered barrage of punches forced Yamasaki’s hand, with the end coming at the 2:29 mark of the second round.

“I thought I would do a little bit better, but she’s really good at not coming in there too much, so it was a little bit more difficult than I thought, but she’s amazing,” Lansberg said.

As for Cyborg’s future, she said, “I already have two belts at home. I just want to put on SuperFights for my fans and make them happy.