Over the last couple years, Tonya Evinger has emerged as one of the best female fighters on the planet, amassing an 11-fight unbeaten streak while climbing to the top of the Invicta FC bantamweight division. Along the way, the women’s mixed martial arts pioneer has also become a bit of a cult figure thanks to her dominant performances and unapologetically real personality.

The laid-back charisma and star potential she showed during her time in Invicta FC was on full display on Wednesday afternoon at the UFC 214 press conference as the 36-year-old veteran explained why she was quick to jump at the chance to face Brazilian juggernaut Cris Cyborg for the vacant UFC women’s featherweight title this weekend in Anaheim.
MORE FROM UFC 214: Press Conference Highlights | Reasons to Watch | Fantasy Preview | Feeling scared not a bad thing for Evinger

“Obviously we’re both Invicta champions,” said Evinger, who has held the all-female fight promotion’s bantamweight title since defeating Irene Aldana two years ago. “I’m willing to take any fight. I’m here to work. I’m here to prove to myself that I’m the best and I’ve got to fight everybody in the way. I don’t care what it takes; that’s what you’ve got to do.

“At the beginning of my career, it took me a while to catch on and figure out what kind of fighter I am,” admitted Evinger, who began competing in 2006 and struggled through a rough patch in the middle of her career before embarking on her current unbeaten streak. “I definitely feel like this is the right time and the right spot and I’m in the right weight class at 135, and if you’re in the right weight class, you can go down 10 pounds or up 10 pounds and I’m definitely willing to do that. 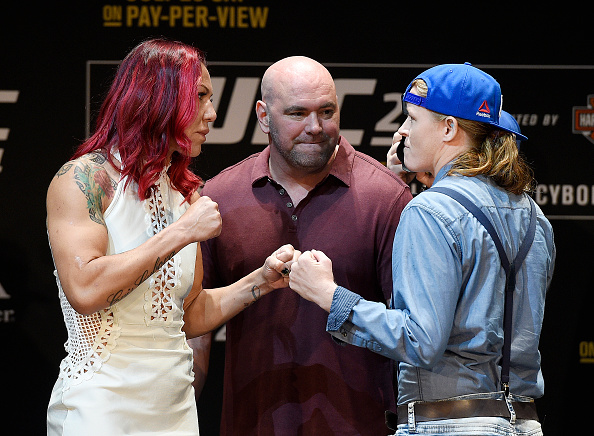 For Cyborg, Saturday’s contest represents her first opportunity to compete in her natural weight class on the UFC stage.

After earning a pair of stoppage victories in 140-pound catchweight bouts last year, the advent of the 145-pound weight class in February opened the door for the ferocious Brazilian finisher to step into the Octagon in optimum condition and deliver the kind of performance that has made her one of the most feared fighters in the sport for the last decade.

And she plans on making the most of her opportunity.

“The last two fights, I had a hard time in the catchweight,” admitted Cyborg, who said her training camp for this fight was a much more joyful, happy experience than prior to her two previous UFC appearances. “(Featherweight) is my division and I want to show all my fans why I’m 10 years undefeated.

“Saturday is going to be an amazing show. Be violent. Be Cyborg.”