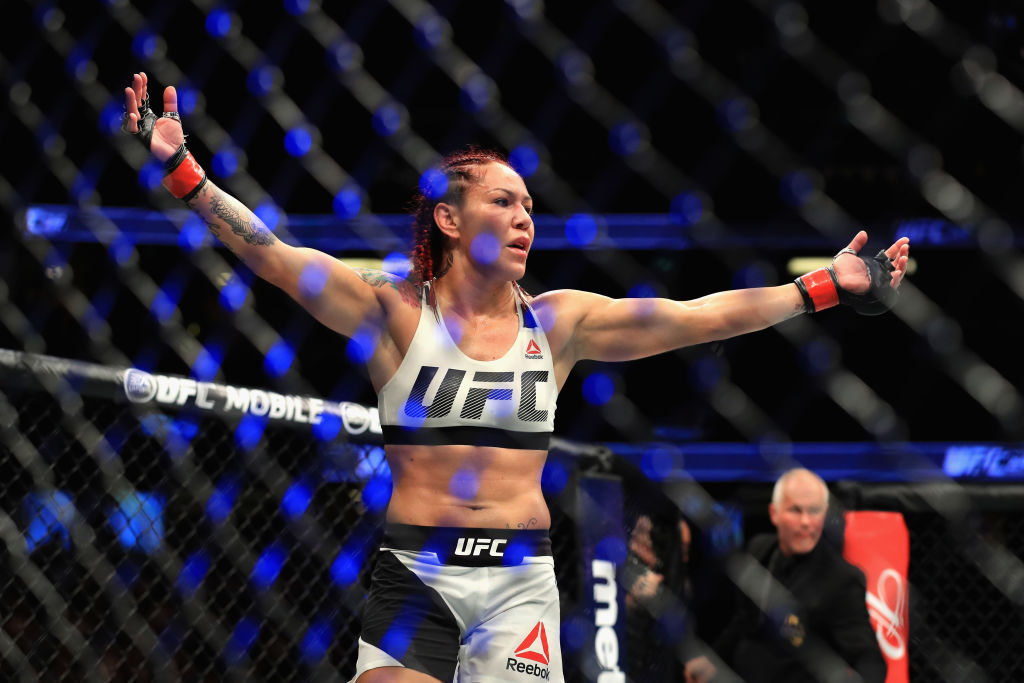 A new UFC women’s featherweight champion was crowned on the UFC 214 card at Honda Center in Anaheim Saturday, as Cris “Cyborg” stopped Tonya Evinger in the third round.

The title makes it a triple crown for the 32-year-old Curitiba native, who was formerly the Strikeforce and Invicta FC featherweight champion.

“A lot of things happened in my career, but before I was just crazy inside the cage,” said Cyborg, now 18-1 with 1 NC. “Now I’m learning fighting. I have calmed down, I see a nice shot, I throw the shot. And I’m really happy to be a world champ. This is the perfect time because I think I’m at the top of my career.”

Cyborg dropped Evinger (19-6, 1 NC) with the first left hook she threw, but “Triple Threat” rose immediately. In a subsequent clinch, Evinger pulled guard, but Cyborg wasn’t playing that game and she rose to her feet before letting loose with punches to the head. Evinger did get a quick takedown midway through the round, only to see Cyborg jump to her feet again. The action came to a brief halt after an inadvertent eye poke by Evinger, and when the action resumed, Cyborg scored with a hard knee to the body. Evinger was hanging tough, though, even as she took Cyborg’s thunder.

Evinger’s toughness was the story of round two, as she stayed in with the hard-hitting Brazilian, even though Cyborg completely dominated the frame.

A right hand followed by a kick to the head rocked Evinger, but she shook it off until a follow-up shot put her on the deck briefly. The Texan got back to her feet, but her offense was having no effect on Cyborg, who ultimately landed the finisher – a left knee to the head that put Evinger on the deck, with a single right hand bringing in referee Mike Beltran to halt the fight at 1:56 of round three.

The 145-pound belt was left vacant when champion Germaine de Randamie was unwilling to fight Cyborg.