Cyborg adds another layer to the legacy

With each successive conquest, it becomes harder and harder to deny Cris Cyborg a place in the pantheon of all-time greats in the sport of mixed martial arts. Through 21 appearances, the Brazilian standout is 19-1 with one no contest and she hasn’t been beaten since losing her debut more than a dozen years ago.

After turning back pioneering forces like Shayna Baszler, Gina Carano and Marloes Coenen early in her career, she arrived in the UFC just under two years ago on a five-fight winning streak that featured a second victory over Coenen surrounded by lopsided victories against overmatched competition.

Even as she began adding triumphs in the Octagon to her winning streak, fans and observers questioned the impact and value of catchweight conquests over Leslie Smith and Lina Lansberg, but in her last two outings, Cyborg has began to quiet even her harshest critics.

At UFC 214 in Anaheim, the 31-year-old added a UFC title to her resume, turning back game veteran Tonya Evinger to claim the vacant women’s featherweight title. Five months later, she wrapped up the UFC’s 2017 campaign by retaining her belt in a highly anticipated showdown with former bantamweight champ Holly Holm.

“Fighting Holly and beating Holly was a real special night for me,” said Cyborg of her UFC 219 triumph. “I knew it was going to be a decision fight because I know she can take a punch and I’m really happy because it was a big challenge for me and a big victory after five rounds.” 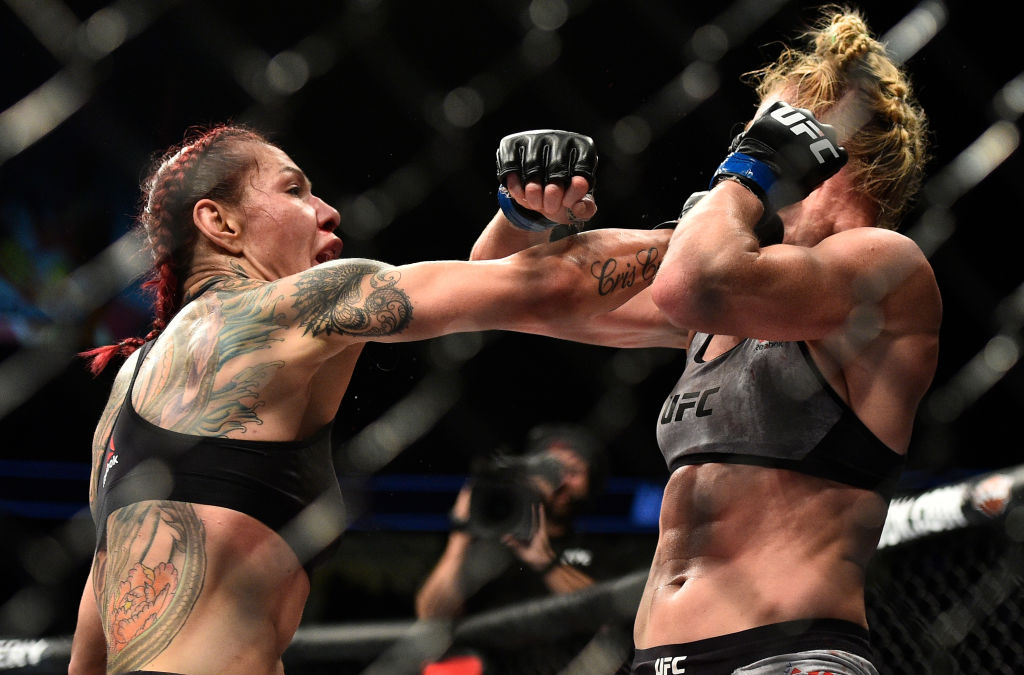 When Max Holloway was felled by an injury, scuttling his main event assignment against Frankie Edgar, the UFC reached to its women’s featherweight champion about stepping in to replace her male counterpart and assuming the headlining role on this weekend’s Pay-Per-View event in Las Vegas.

Despite being in Portugal at the time and facing a truncated training camp, Cyborg accepted and makes the quickest turnaround of her career to defend her title against Yana Kunitskaya Saturday evening at UFC 222.

“I started training while I was in Portugal and I checked my weight and my weight was great, so when they called my manager, I said, ‘Okay, I can accept the fight,’” she said. “I flew back to L.A. and trained for two weeks with my team. I was already in shape and I feel great.

“Yana fought before in Invicta – she was the champion at 135 – and the commission told her to go up,” she said of her opponent, who claimed the vacant Invicta FC bantamweight title with a victory over Raquel Pa’aluhi last time out before signing to compete at featherweight in the UFC. “She’s a real 145-pounder. I think she’s a really complete fighter and I think it’s going to be an amazing fight on Saturday.”

While the rapid return to the cage is a departure from her usual timetable, the dominant featherweight champion admitted that taking less time off between bouts and fighting more frequently has been something her head coach Jason Parillo has been after her to do for quite some time.

“After the Holly fight, Jason Parillo said, ‘You need to fight as soon as possible; I want you to fight all the time,’” recalled Cyborg, who has previously taken at least four months off between appearances. “He said after the Holly fight that I was growing my game, growing as a fighter, fighting more rounds and he wanted me to keep fighting because you learn the most when you’re fighting.

“I said, ‘You know, I want a little break, I want a vacation,” laughed the UFC featherweight queen. “But now I’m here and I’m very excited about this because we always talked about this, me and Jason, and I knew it would happen now and when the opportunities come, you have to be ready and prepared.”

Having accepted the short-notice challenge of defending her title while welcoming Kunitskaya to the Octagon for the first time, Cyborg has a chance to add another layer to her impressive legacy, one that already has people considering her the greatest female fighter of all-time.

“It makes me really happy,” she said in regards to being considered the best to ever do it on the female side of the sport. “People thinking that about me makes me really want to keep working hard, keep getting better every day and make an amazing fight for all my fans and be thankful for everything they do for me.”