Cutelaba knows he has will to get to where he wants

NEW YORK – Ion Cutelaba was an international man of mystery at the UFC 217 media day at Madison Square Garden’s Theater on Wednesday, opting to be coy when asked if he will be bringing out the green body paint on weigh-in day for his bout against Michal Oleksiejczuk.

“It's a secret,” he said through a translator before admitting that it takes 40 minutes to an hour to transform into “The Hulk” as he has in the past, which is probably the last thing any fighter wants to do before stepping on the scales.

But green or not on Friday, on Saturday there will be no mystery when it comes to Cutelaba’s game plan, as he will be looking to hit the Polish newcomer early and often, using an aggressive style that is rapidly becoming his trademark. And when someone fights like that, it makes them a fan favorite pretty quick. 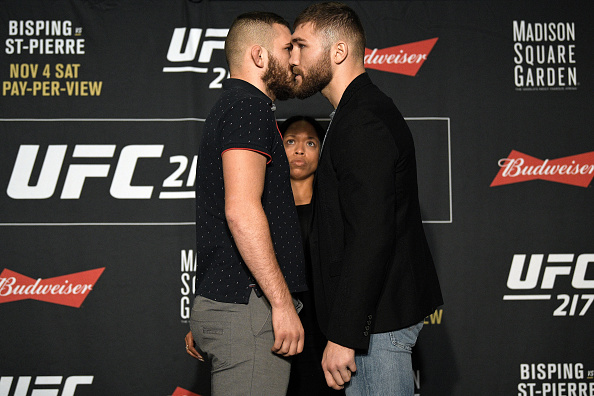 Michael Oleksiejczuk of Poland and Ion Cutelaba of Republic of Moldova face off during the UFC 217 Ultimate Media Day inside the Theater Lobby at Madison Square Garden on November 1, 2017 in New York City. (Photo by Jeff Bottari/Zuffa LLC/Zuffa LLC via Getty Images)" align="center" />

“I want to be the best, and I love it that people love me,” said the 23-year-old, whose UFC slate may read 2-2, but behind the numbers, he’s outpointed Jonathan Wilson, knocked out Henrique da Silva in 22 seconds and lost a Fight of the Night war against Jared Cannonier via decision. In other words, he brings the heat on fight night, and with it comes an intensity that begins early in fight week, which meant a memorable staredown with Oleksiejczuk today.

“Everyone knows that the Hulk is the Hulk and he's strong,” he smiled. “Also, I'm a young fighter, I'm a strong fighter and I know what the people want and what the people love. With time, you'll see even more and more of me.”

That’s good news for fight fans, but being seen is even better for Cutelaba because the Republic of Moldova native has proven that even though he comes from a place that is far from an MMA hotbed, he still can make it to the elite level of the sport and build a following in the big show.

He’s here in Madison Square Garden, continuing a world tour that has seen him compete everywhere from Kazakhstan and France to Canada and New Zealand. And while New York City is nice, all that matters to Cutelaba is getting his hand raised this weekend.

“As a principle, it doesn't matter where I fight,” he said. “My main goal is to win.”